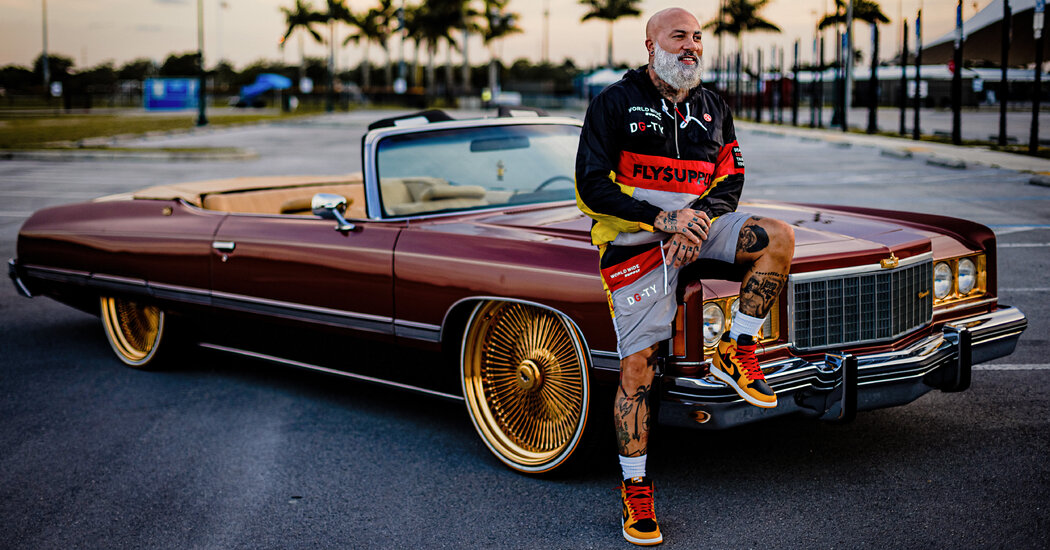 Not just any car: a 1974 Chevrolet Caprice Classic convertible in metallic golden brown with 24-inch, 24-karat gold rims that run $30,000, a custom gold plate that reads “Ch4rlie” and an all-leather tan interior kept so pristine that he does not allow just anyone inside. When the rapper Pitbull featured Charlie Brown in a music video, Juice forbade the lightly dressed young women swaying in the back from wearing shoes.

Charlie Brown is a “donk,” a customized 1970s Chevy high-riser with large wheels, the kind of big, flashy hulk that three decades ago became Miami’s contribution to American car culture and then spread to other cities in the South. Since then, the world of souped-up cars, luxury cars and collector cars has only flourished.

Some of that culture will be on display this weekend, when South Florida hosts a new Formula 1 Grand Prix, the sort of buzzy sporting event that makes Miami Miami. Formula 1, which commands a vast international audience, is seeking to capitalize on its growing U.S. popularity, fueled in part by the success of the Netflix show “Drive to Survive,” as NASCAR’s television ratings have been in decline.

rode in a replica black Ferrari Daytona Spyder to the sound of Phil Collins’s “In the Air Tonight.” (Ferrari sued, then had a change of heart and donated Crockett’s white Ferrari Testarossa.)

had wanted to race downtown, between Biscayne Bay and the gleaming Miami skyline. Instead, they constructed a faux marina for dry-docked boats in a part of the venue named the “Yacht Club.”

Florida likes to build highways, despite the state’s vulnerability to climate change, and ordinary Miamians, with limited public transportation options, spend long hours in their cars. A defunct local blog was aptly named “Stuck on the Palmetto,” a reference to the perennially backed up State Road 826.

“Cars are endemic here,” said Justin Landau, the co-chief executive of El Car Wash, a chain of express carwashes that offers unlimited washes for $29.99 per month. One of its banners reads, “Rain doesn’t clean cars.”

cutting Major League Baseball players’ hair in 1993 and now has a barbershop inside the Miami Marlins’ stadium. The pitcher Dontrelle Willis bought him the ’74 Caprice, his dream car, off eBay. A Charlie Brown figurine hangs from the rearview mirror.

Juice meets other donk owners on Sunday evenings, in the parking lot of a Sonic. They hang out, listen to music and geek out over car upgrades. He organizes a New Year’s Day ride that draws hundreds of drivers.

One recent evening, as Juice showed off his car in a public park, a man named Miguel approached and sheepishly asked if he could take a closer look.

Local officials and housing advocates worry about what the damaged housing stock will mean for people with low wages or fixed incomes. In interviews, … END_OF_DOCUMENT_TOKEN_TO_BE_REPLACED