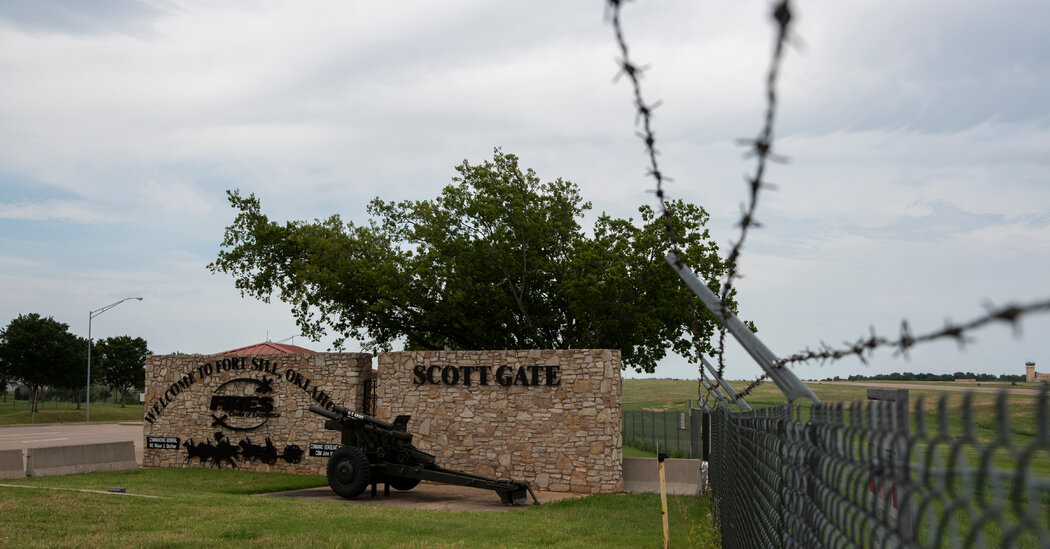 Soldiers at Fort Sill in Oklahoma have been suspended from their duties as Army investigators conduct an inquiry into a sexual assault allegation, military officials said.

A female soldier who was a trainee “reported that she was the victim of sexual assault involving Fort Sill cadre members,” Maj. Gen. Ken Kamper, commanding general of the base, said in a statement on Thursday.

A formal complaint was made on March 27, but it is unclear when the assault took place or how many soldiers were involved.

The allegations were “immediately reported to law enforcement,” and special agents from the U.S. Army Criminal Investigation Command have opened an investigation, General Kamper said.

previously reported by The Lawton Constitution. Fort Sill, about 90 miles southwest of Oklahoma City, is a prominent training center for artillery soldiers. About 53,000 people live on the base, including 20,000 military and civilian personnel.

General Kamper said that the soldier who brought forward the complaint was quickly connected with victim services.

“We’re proud of the courage she displayed in coming forward with these allegations,” he said.

Sexual assault in the military was highlighted as a widespread issue after the horrific killing of Specialist Vanessa Guillen, whose remains were discovered about 25 miles from Fort Hood in central Texas. Officials said she was killed by a fellow soldier who dismembered and burned her body. Specialist Guillen’s family said she had told them she was being sexually harassed, but never made a report.

An investigation into the culture of Fort Hood revealed a climate in which women were “vulnerable and preyed upon, but fearful to report and be ostracized and re-victimized,” according to the report released in December.

released in 2019 that surveyed men and women across the Army, Navy, Air Force and Marines estimated that there had been 20,500 instances of “unwanted sexual contact” in the previous fiscal year.

The Defense Department found that there were 7,825 sexual assault reports involving service members as victims in 2019 — a 3 percent increase from 2018 — and that sexual harassment reports rose 10 percent over the same period.

From 2018 to 2019, the conviction rate for cases was unchanged, the report said: 7 percent of cases that the command took action on resulted in convictions, the lowest rates since the department began reporting in 2010.

When asked by a reporter whether this was an isolated incident on the base, General Kamper declined to directly answer, The Lawton Constitution reported.

“Unfortunately, sexual assault is a national problem,” the general said. “When we look at the Department of Defense, our new secretary’s words about the sexual assault and when we look at our Army’s commitment over time to root out sexual assault, it hurts our soldiers and families. It’s terrible for unit cohesion and is detrimental to our mission.”

AUSTIN, Texas--(BUSINESS WIRE)--As the first multifamily management company to be recognized in the Public Relations and Marketing Excellence Awards, … END_OF_DOCUMENT_TOKEN_TO_BE_REPLACED

There have been whispers of cooling housing and rental prices in the San Francisco Bay Area, but that hasn't yet translated into practical, noticeable … END_OF_DOCUMENT_TOKEN_TO_BE_REPLACED

Cars pass in Independence Square at twilight in Kyiv, Ukraine, Monday, Oct. 31, 2022. Rolling ... [+] blackouts are increasing across Ukraine as the … END_OF_DOCUMENT_TOKEN_TO_BE_REPLACED