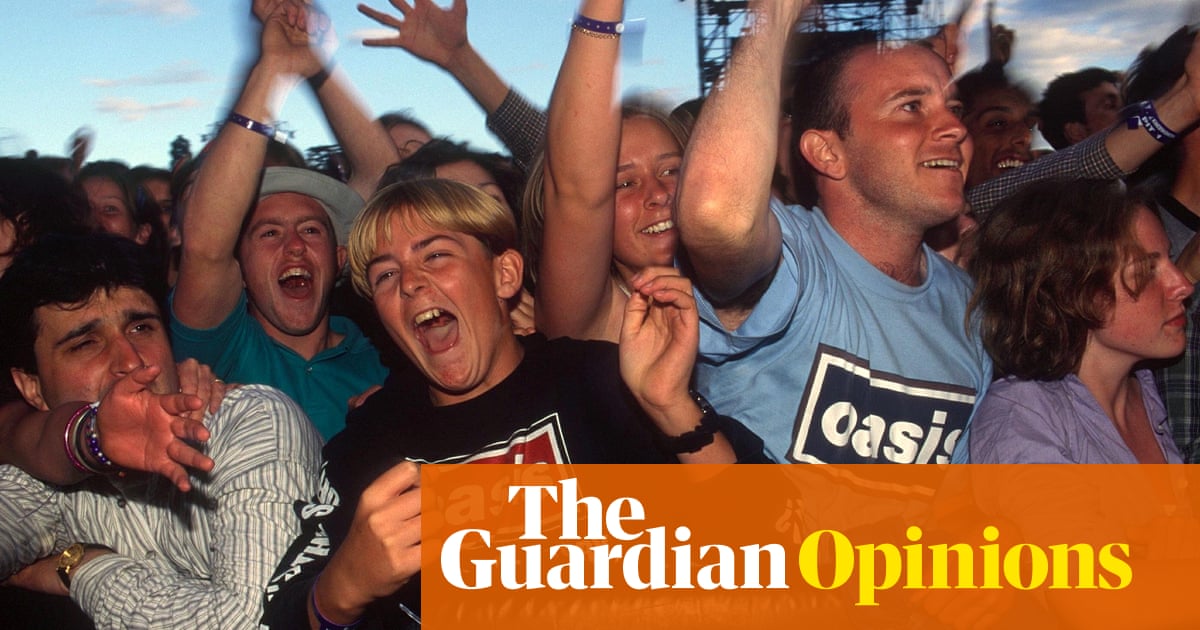 There is too much of everything. I spoke to Alan McGee last week regarding a film about his life, in which he is played by the chap who played Spud in Trainspotting. It’s really good. When I asked about the state of music now, the man who discovered Oasis and has worked with Primal Scream, the Jesus and Mary Chain and My Bloody Valentine, among others, shrugged helplessly. He said that it is now next to impossible to make an impact because there is simply too much music about.

In the Oasis documentary Supersonic, Noel Gallagher says he thinks of their massive Knebworth concerts of 1996 as the last hurrah of the pre-digital age. “The last great gathering of the people before the birth of the internet,” he says. “It’s no coincidence that things like that don’t happen any more.” Seen through this prism – and he obviously wasn’t referring to the pandemic here – the footage of hordes of thrilled punters thronging their way into the concert is quite elegiac; I hadn’t seen such innocence in them – or maybe all of us – before. We didn’t know what was coming.

I am still not sure that what was coming has turned out to be entirely bad. When I was banging on about that quote on the radio, our sound engineer piped up that she had been at Knebworth. Her review of it was as follows: “It was good, but there were too many people.” Setting that practical problem aside, if megagigs like that don’t happen now, because it’s impossible for any act to achieve critical mass among the thousands of acts out there, so be it. It can’t be terrible that there are so many of them.

Gallagher says we should be worried that bands like Oasis, brought up on council estates, won’t make it like that any more. Perhaps that’s true, even though the digital age has democratised the whole caper in that the means of production, and indeed broadcast, are so much cheaper and more accessible. This market saturation does have the unhappy consequence that bands are unable to make a living out of it.

For the consumer, meanwhile, it’s bewildering. Where exactly do you start? It is the same with podcasts. Many of them are up there with the best audio I’ve ever heard, and that’s with half a century’s listening and nearly 30 years’ broadcasting under my belt. But with thousands upon thousands to choose from, how do you go about separating the wheat from the chaff? Every brilliant one I come across has me thinking there are another 10 just as good I’ll never find. How do you set about deciding what to listen to?

I have just searched that very question on Google and been directed to a whole list of lists. There is Good Housekeeping’s 45 best podcasts; the Independent has 15 and time.com has 50, but that one’s from 2019. Moving on, there are a strange array of numbers: Elle chooses 68 to listen to; Wired recommends 43 and Esquire 69. Enough. Can someone please send me a Top 10 of top [insert number] lists of podcasts, and I’ll go with the top three of those and be done with it. My rarely stilled, generally hysterical fomo is in overdrive.

It is the same with the availability of data about more or less everything. Unless you are advancing the most absurd of propositions, there will be some apparently plausible data out there to support you. I remember hearing Tony Blair say how fed up he gets with this. The example he gave, which may have been hypothetical, concerned crime numbers. Advisers would tell him that crime went up during a recession because people needed to steal to live. Then when we came out of recession advisers would say crime was going up because some households were doing better and there was more to steal.

We have evolved to be clever enough to create massive amounts of choice in every field, but I, for one, have yet to evolve enough to know how to best make the necessary choices.

Chief Covelli said Mr. Crimo planned the shooting for several weeks, but that the authorities had not yet established what his motive was. “We have no … END_OF_DOCUMENT_TOKEN_TO_BE_REPLACED

Kevin McKenzie and Martine van Hamel were standing in the dining room of their weekend house in Woodstock, N.Y., trying to figure out when they got … END_OF_DOCUMENT_TOKEN_TO_BE_REPLACED