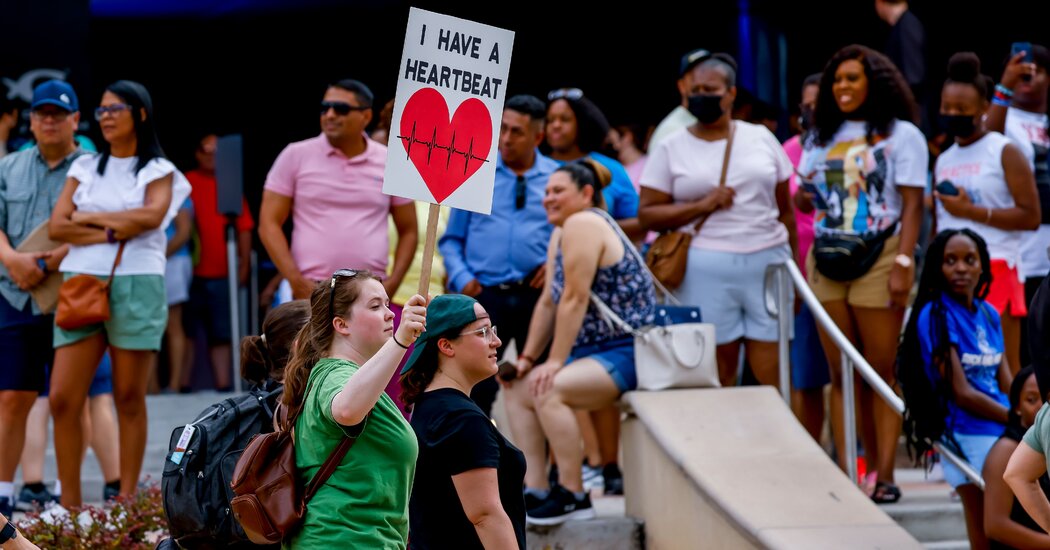 A federal appeals court panel immediately allowed a Georgia law that bans abortions after about six weeks of pregnancy to go into effect on Wednesday, ending a yearslong battle over one of the country’s most restrictive laws.

The law, signed by Gov. Brian Kemp in 2019, prohibits most abortions after six weeks of pregnancy, which is typically when doctors can begin to detect a fetus’s cardiac activity. Exceptions to the law are allowed if a woman faces serious harm or death in pregnancy, or in cases of rape or incest, so long as a police report has been filed. Georgia law previously allowed abortions until at least 20 weeks of pregnancy.

In the ruling by a three-judge panel from the U.S. Court of Appeals for the 11th Circuit, Chief Judge William H. Pryor Jr. wrote that the Supreme Court case that overturned Roe v. Wade “makes clear that no right to abortion exists under the Constitution, so Georgia may prohibit them.” He also wrote that the state’s expanded definition of a natural person, which the law says includes “a member of the species of Homo sapiens at any stage of development who is carried in the womb,” was not vague, as the plaintiffs had argued.

declared it unconstitutional last summer, the appeals court issued an injunction and decided to delay its ultimate decision until the Supreme Court’s ruling in Dobbs v. Jackson Women’s Health Organization, which came on June 24.

said in a statement posted on Twitter after the ruling.

Anthony Michael Kreis, an assistant professor of law at Georgia State University, said that while the ruling was unsurprising, its immediacy was “shocking” and its tone seemed “spiteful.” He said it was uncommon to not allow for a few weeks before such a significant change went into effect.

He also noted that the opinion referred to the health care providers who filed the lawsuit as “abortionists,” rather than in more dispassionate terms like “plaintiffs” or “appellants.”

The Atlanta Journal-Constitution said on Wednesday that fetuses with cardiac activity could now be listed as dependents on state taxes and allow women to file for child support.

“It is a dramatic and radical departure from the status quo of Georgia law,” Dr. Kreis said.

There were no arrests in three quarters of last year’s fatal shootings, according to statistics provided by Mr. Krasner’s office, even as arrests for … END_OF_DOCUMENT_TOKEN_TO_BE_REPLACED