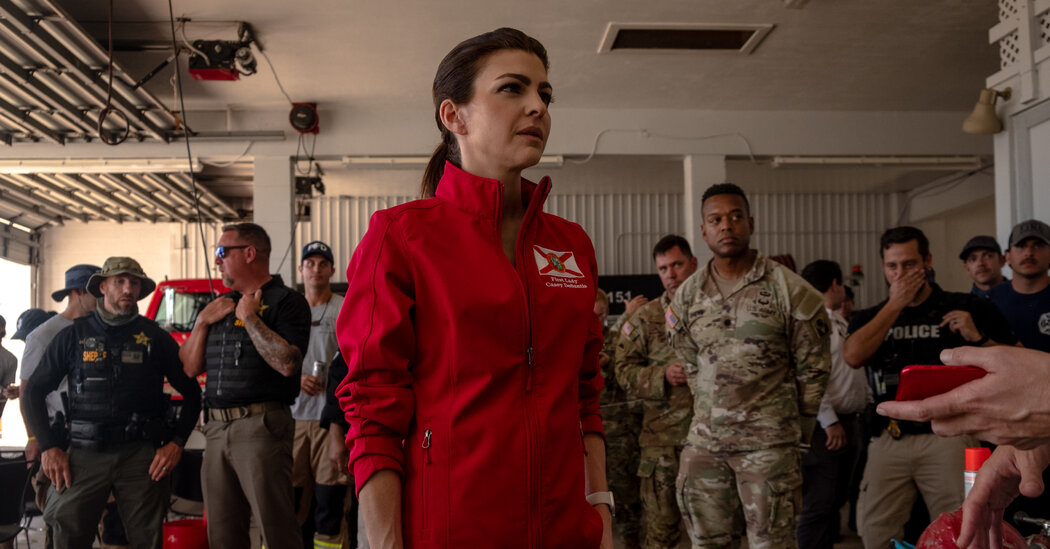 MIAMI — The morning after Hurricane Ian slammed into Florida, Gov. Ron DeSantis shared the podium at his news briefing with two people: his emergency management director and his wife, Casey, who promoted a state disaster relief fund that was seeking donations for storm victims and recovery efforts. Twelve hours and two more public appearances later, Ms. DeSantis announced that the fund had already raised more than $10 million.

“We are going to make a big difference to help send resources immediately to those people who need them most,” she said on Sept. 29, rattling off thank-yous to Amazon, Walmart and more than a dozen other major corporations inside and outside the state — and to the quarterback Tom Brady, who plugged the fund on Twitter.

Since then, Ms. DeSantis has remained in the spotlight, often speaking alongside her husband, a Republican and likely presidential hopeful who is up for re-election next month, in the aftermath of the storm. The couple joined President Biden and Jill Biden, the first lady, in Fort Myers on Wednesday as the Bidens surveyed the catastrophic damage from the Category 4 storm.

Volunteer Florida, a tax-exempt state commission focused on community service projects, Ms. DeSantis, 42, has become the face of Florida’s efforts to collect charitable donations in Ian’s wake. Shortly after the storm struck on Sept. 28, the governor’s office announced that Ms. DeSantis had “activated” the commission’s disaster relief fund. While Florida is also seeking significant help from the Federal Emergency Management Agency, Mr. DeSantis has emphasized the importance of private donations.

a tweet on Wednesday, Florida’s Republican lieutenant governor said that the state’s response to Ian had been “historic” in part because of “@CaseyDeSantis’ Disaster Fund.”

The Aftermath of Hurricane Ian

“We’ve now mobilized private charities with a lot of money — and growing — to help people in really tough circumstances,” Mr. DeSantis said on Wednesday, thanking his wife, who stood a few steps away, before he introduced the president.

Before Ian, Ms. DeSantis, a former television news reporter and Golf Channel host, may have been less known outside of Florida. But she has played a starring role in her husband’s career as governor, from narrating a cheeky 2018 primary television ad in which he urged their toddler to “build the wall,” to participating in personnel interviews as he hired people to work in his administration, to keeping — at least for a time — an office in the governor’s suite at the State Capitol. The governor’s office did not respond to questions about her presence or staff there now.

helped push out Republican Party of Florida staff members who were seen as more loyal to then-President Donald J. Trump and his aides than to Mr. DeSantis. She is deeply involved in Mr. DeSantis’s re-election campaign, meeting in small groups with women voters under an initiative that the campaign calls “Mamas for DeSantis.” She and the governor have three children, ages 5, 4 and 2.

Casey DeSantis, formerly Casey Black, was a local television anchor in the Jacksonville area when Mr. DeSantis, a fellow golf enthusiast, met her on a driving range. They married in 2010. (Their marriage license listed the location as Lake Buena Vista, Fla., which is home to Disney World.) Two years later, Mr. DeSantis was elected to Congress, where he was known to be aloof. Mr. DeSantis has never been much of a glad-hander, but campaign donors are said to rave about his wife’s ebullience.

She has advised Mr. DeSantis, 44, on media strategy and communications in particular, using her television expertise to weigh in on how his administration should deliver its message, in particular to right-wing media.

“If I wasn’t in office, I’d be working to make money in business, but she would be on Fox News,” Mr. DeSantis said in a podcast interview released in January. “I guarantee you that.”

(“You can’t be a brunette on Fox!” a woman in the audience yelled. “They need” them, the governor replied.)

Ms. DeSantis kept a lower profile after being diagnosed with breast cancer last October. She and Mr. DeSantis traveled from the governor’s mansion in Tallahassee to a hospital in Tampa for her treatments. Her return to the campaign trail in May, for a visit to the retirement mecca of The Villages, received “exclusive” coverage from Fox News.

Her foray into disaster relief began shortly after Mr. DeSantis took office in January 2019, when the Florida Panhandle was still recovering from Hurricane Michael, a Category 5 storm that hit three months earlier. She focused on providing mental health counseling for children, overseeing the creation of telemedicine portals for public schools.

Since Hurricane Ian made landfall last week, Ms. DeSantis has helped volunteers deliver meals at a Baptist church, visited veterans at a nursing home and distributed food and water with the National Guard. The governor’s office has announced donations from major corporations in and out of the state, including Florida Power & Light, Goldman Sachs and Verizon, and grants to nonprofits such as Save the Children, the Salvation Army and the American Red Cross.

Internal Revenue Service records show that Volunteer Florida received tax-exempt status in 2010, when Charlie Crist — now Mr. DeSantis’s Democratic challenger who polls suggest is trailing him — was governor. Its most recent tax filing, for the year ending in June 2020, shows that the foundation contributed to Catholic Charities, the Centro Campesino Farmworker Center and the Gulf County School Board, among other organizations.

Ms. DeSantis has taken the personal, emotional approach to call for more charitable giving, standing in stark contrast with her husband’s businesslike one. At the Baptist church over the weekend, she said she met a woman in a minivan named Mary.

“There were five small children in the back,” she said. “She broke down into tears when she started talking about her home and the floodwaters coming in.”

By Thursday, the governor’s office announced that donations to the disaster relief fund had reached nearly $35 million.

AUSTIN, Texas--(BUSINESS WIRE)--As the first multifamily management company to be recognized in the Public Relations and Marketing Excellence Awards, … END_OF_DOCUMENT_TOKEN_TO_BE_REPLACED

There have been whispers of cooling housing and rental prices in the San Francisco Bay Area, but that hasn't yet translated into practical, noticeable … END_OF_DOCUMENT_TOKEN_TO_BE_REPLACED

Cars pass in Independence Square at twilight in Kyiv, Ukraine, Monday, Oct. 31, 2022. Rolling ... [+] blackouts are increasing across Ukraine as the … END_OF_DOCUMENT_TOKEN_TO_BE_REPLACED