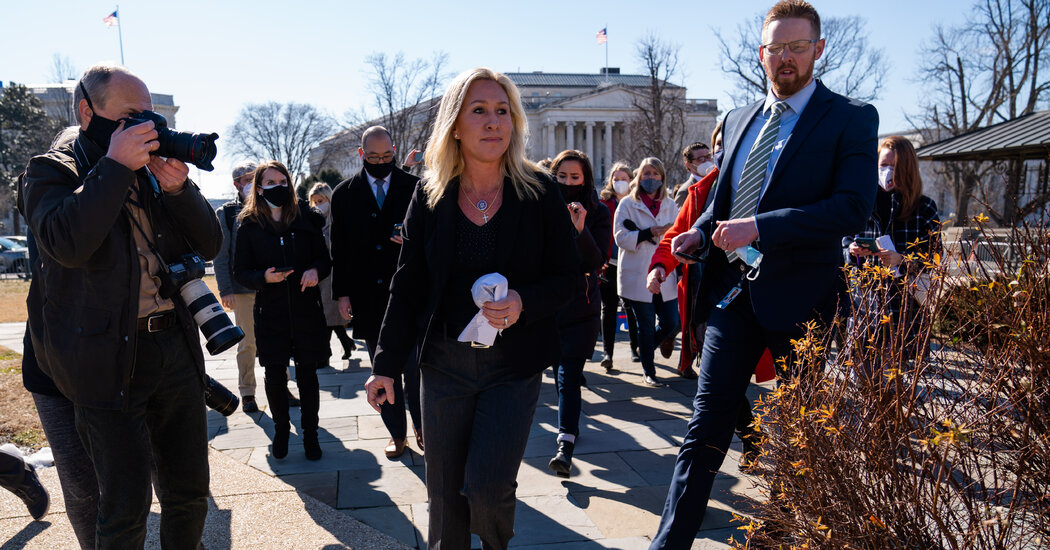 Representative Marjorie Taylor Greene of Georgia drew a rare condemnation on Tuesday from the top House Republican for the latest in a series of comments she has made comparing mask and vaccine mandates to the treatment of Jews by Nazis during the Holocaust.

In a series of posts on Twitter, Ms. Greene, a right-wing provocateur who previously endorsed a series of violent and racist conspiracy theories, has railed against decisions made by private businesses to impose vaccine mandates or drop mask requirements only for vaccinated individuals. Her comments came amid an uptick in anti-Semitic attacks on Jews across the nation.

“Vaccinated employees get a vaccination logo just like the Nazi’s forced Jewish people to wear a gold star,” she wrote in one post on Tuesday.

In another, referring to a university barring unvaccinated students from attending classes in person, she wrote: “It appears Nazi practices have already begun on our youth. Show your VAX papers or no in person class for you. This is exactly what I was saying about the gold star.”

issued a statement condemning her language, as did his top two deputies.

“Marjorie is wrong, and her intentional decision to compare the horrors of the Holocaust to wearing masks is appalling,” Mr. McCarthy said in a statement. “The Holocaust is the greatest atrocity committed in human history. The fact that this needs to be stated today is deeply troubling.”

Senator Mitch McConnell of Kentucky, the minority leader, also denounced her comments, telling CNN they were “outrageous” and “reprehensible.”

Mr. McConnell earlier this year said Ms. Greene’s “loony lies and conspiracies” were a “cancer for the Republican Party and our country.”

Those rebukes came after one from the Republican Jewish Coalition, a prominent organization whose political action committee contributes generously to the G.O.P.

Matt Brooks, the group’s executive director, said Ms. Greene’s Holocaust comparisons were “wrong and inappropriate,” calling her “an embarrassment to yourself and the GOP.”

Her most recent comments have created yet another problem for House Republican leaders, who recently attempted to take control of their political message by purging Representative Liz Cheney of Wyoming from her post as the conference chair, citing her refusal to ignore former President Donald J. Trump’s lie of a stolen election. And they muddled a theme that Republicans have attempted to highlight in recent days as they have tried to paint Democrats as insufficiently supportive of Israel and the American Jewish community.

Mr. McCarthy declined earlier this year to take action against Ms. Greene for her earlier incendiary statements, including one in which she endorsed assassinating Speaker Nancy Pelosi, even as he disavowed the remarks themselves.

Some Republicans had argued it would be unfair to rebuke Ms. Greene for comments she made before serving in Congress. But after it emerged that the Georgia freshman had also suggested that a devastating wildfire that ravaged California was started by “a laser” beamed from space and controlled by a prominent Jewish banking family, the Republican Jewish Coalition stepped in and said it was “working closely with the House Republican leadership regarding next steps.”

A spokesman for Ms. Pelosi on Tuesday said Mr. McCarthy’s refusal to punish Ms. Greene and his days of silence about her Holocaust remarks “has spoken volumes about his allegiance to the most extreme elements” of his party.

Asked if the freshman congresswoman should be censured or expelled from Congress for her new comments, Ms. Pelosi responded: “I think she should stop talking.”

The Mississippi River town of Ste. Genevieve, MO, might be the ideal spot for a buyer in search of a refreshing idea.This mixed-use structure on the … END_OF_DOCUMENT_TOKEN_TO_BE_REPLACED

More From ForbesJan 26, 2022,09:00am ESTCompany Named For Jetsons Son Unveils Autonomous Cargo EVTOL Drone Of The Near … END_OF_DOCUMENT_TOKEN_TO_BE_REPLACED

The prison in Hasaka where thousands of Islamic State fighters are held, in 2019.Credit...Ivor Prickett for The New York TimesThe prison at the center … END_OF_DOCUMENT_TOKEN_TO_BE_REPLACED