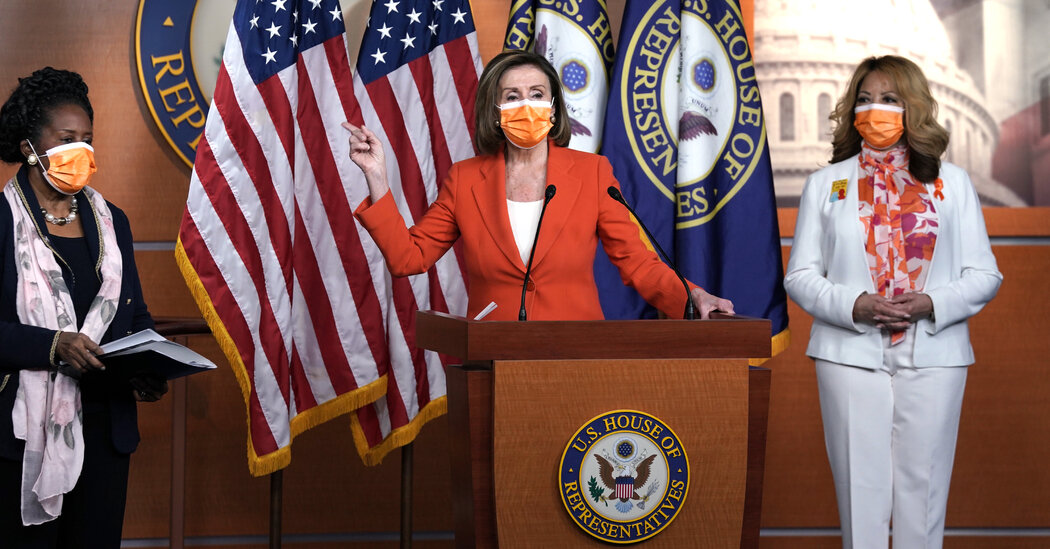 “This administration will not wait for the next mass shooting to heed that call,” he said.

On Thursday, Speaker Nancy Pelosi and many other House Democrats wore orange clothing or face-masks in solidarity with the gun safety movement, erupting in applause on the floor when the bills passed.

Still, the legislation will join a growing stack of liberal agenda items that are widely popular with voters but appear destined to languish in the 50-50 Senate, where Democrats must win the support of 10 Republicans to pass most major measures. It is part of a concerted strategy by Democrats to increase pressure on those in their ranks who are resistant to eliminating the legislative filibuster, and to force Republicans to take politically unpopular votes ahead of the 2022 midterm elections.

“A vote is what we need, not hopes and prayers,” said Senator Chuck Schumer of New York, the Democratic leader, at a news conference on Thursday. “We will see where people stand.”

In a statement, Brian Lemek, the executive director of the Brady political action committee, which supports candidates who endorse universal background checks, said the group would “make sure every voter knows and doesn’t forget who did and did not vote for this lifesaving piece of legislation.” The group plans to spend “upwards of $10 million” in the coming midterm election cycle, a spokeswoman said.

House Republicans almost uniformly opposed the measures, arguing that the legislation wouldn’t make it harder for criminals to improperly receive weapons, but would impose a significant burden on law-abiding citizens attempting to purchase a firearm.

“These rights protect my life, liberty, and property,” said Representative Burgess Owens, Republican of Utah. “They were granted to me by God; they cannot be taken away from me by D.C. bureaucrats.”

Eight Republicans voted to advance the universal background legislation, while one Democrat, Representative Jared Golden of Maine, opposed it. Two Republicans supported extending the length of checks from 3 to 10 days, while two Democrats, Mr. Golden and Ron Kind of Wisconsin, broke with their party to oppose it.

Chief Covelli said Mr. Crimo planned the shooting for several weeks, but that the authorities had not yet established what his motive was. “We have no … END_OF_DOCUMENT_TOKEN_TO_BE_REPLACED

Kevin McKenzie and Martine van Hamel were standing in the dining room of their weekend house in Woodstock, N.Y., trying to figure out when they got … END_OF_DOCUMENT_TOKEN_TO_BE_REPLACED