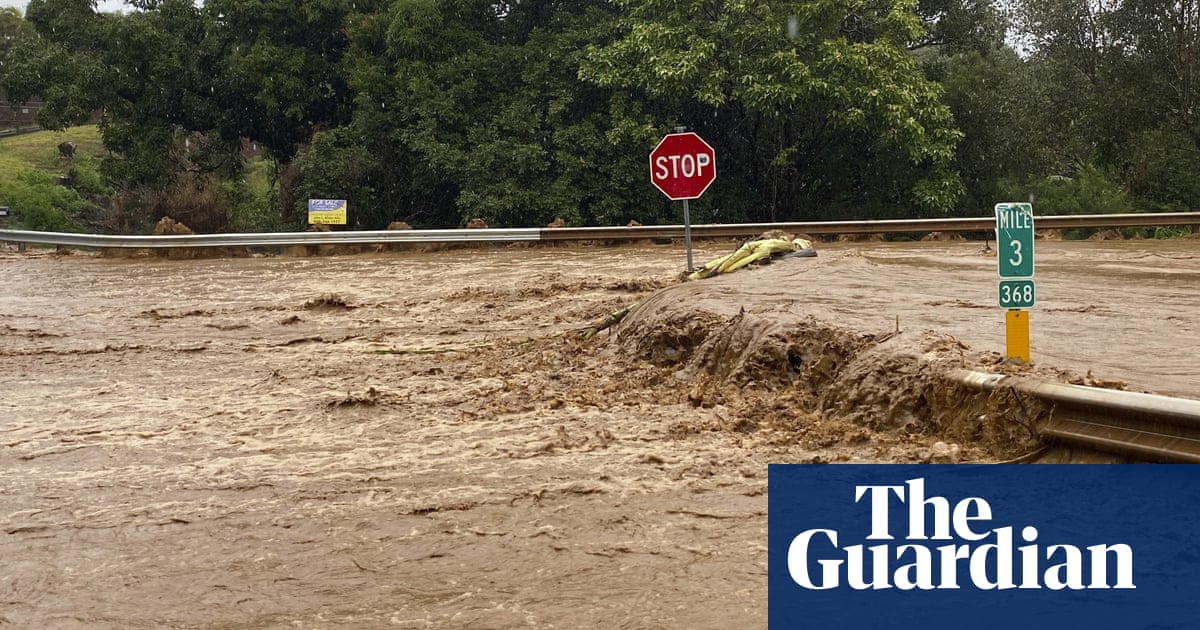 Heavy rains triggered flooding on multiple Hawaiian islands this week, destroying homes and bridges and setting off mass evacuations. The downpour, officials and climate scientists say, is an example of the more intense rainstorms that are occurring more frequently as the planet warms.

The rainstorms this week first affected Maui, moved northward up the island chain to Oahu and Kauai, then circled around and hit the southernmost part of the Big Island.

On Oahu, flooding covered roads and yards in towns on the eastern coast. Rising waters in the Opaelua stream, which carries waters from the mountains down to the ocean, set off an evacuation order for the small town of Haleiwa, a mecca for big-wave surfers. Honolulu firefighters rescued a 27-year-old man after his truck was swept down a stream, and suspended the search for an individual a witness saw in a stream in Pearl City.

Meteorologists on Wednesday extended a flash flood watch for the entire state through Friday because of the potential for more rain and because the ground was already saturated.

“This is really an example of climate change in the present day,” Suzanne Case, the head of the department of land and natural resources, said in a statement. “We have a flood emergency because of the heavy rain bomb. And we’re seeing these more and more across the island chain – more frequent and more extreme events.”

The warming climate is affecting rainfall patterns in the state. A 2010 report from the University of Hawaii’s Sea Grant College Program said rainfall declined 15% over the prior 20 years. Yet the same report found between 1958 and 2007, rain events with the heaviest downpours increased 12%, underscoring that more intense rainstorms are growing in number.

Pao-Shin Chu, a University of Hawaii professor and the state’s climatologist, said theoretical studies suggest that for every one-degree Celsius increase in sea surface temperatures, there is likely to be a 7% increase in atmospheric moisture.

Hawaii is experiencing some of this increased moisture already. In 2018, Kauai set a national record for the amount of rain recorded in a 24-hour period when 49.69in (1.26 meters) fell from 14 April to 15 April. The same storm set off landslides and blocked the only highway connecting small Kauai north shore towns to the rest of the island.

The frequency of intense rains like that one and this week’s are an indication people should be prepared for such events more often, Chu said.

“Don’t think that this is like a once-in-a-hundred-years event that you’ll only see once in your lifetime. It is changing,” Chu said. Less time is lapsing between them, he added. “So it could be once every 30 years. Who knows?”

To better prepare for future disasters, he said it will be important for scientists to understand how weather was interacting with a warming climate to cause so much rain to fall in such a short period.

The Honolulu mayor, Rick Blangiardi, said the city will need to work with state partners to keep waterways clear of debris to help prevent flooding.

“We need to get used to climate events like this,” Blangiardi said. “A tremendous concentration of rain in a small amount of time in focused areas is going to result in flooding anywhere. If we have situations like that, then we need to really approach and attack.”

Kohl's announced Friday that it is terminating talks to sell its business, saying that retail environment has significantly deteriorated since the … END_OF_DOCUMENT_TOKEN_TO_BE_REPLACED