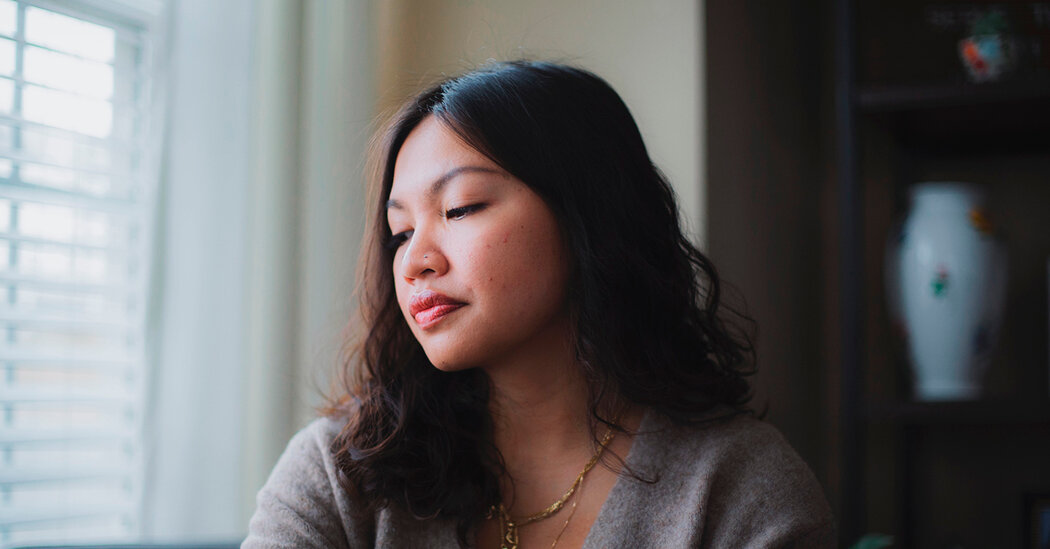 Gabrielle Dawn Luna sees her father in every patient she treats.

As an emergency room nurse in the same hospital where her father lay dying of Covid last March, Ms. Luna knows firsthand what it’s like for a family to hang on to every new piece of information. She’s become acutely aware of the need to take extra time in explaining developments to a patient’s relatives who are often desperate for updates.

And Ms. Luna has been willing to share her personal loss if it helps, as she did recently with a patient whose husband died. But she has also learned to withhold it to respect each person’s distinct grief, as she did when a colleague’s father also succumbed to the disease.

It’s challenging, she said, to allow herself to grieve enough to help patients without feeling overwhelmed herself.

“Sometimes I think that’s too big a responsibility,” she said. “But that’s the job that I signed up for, right?”

Tom Omaña Luna, was also an emergency nurse and was proud when Ms. Luna joined him in the field. When he died on April 9, Ms. Luna, who also had mild symptoms of Covid-19, took about a week off work. Her mother, a nurse at a long-term-care facility, spent about six weeks at home afterward.

“She didn’t want me to go back to work for fear that something would happen to me, too,” Ms. Luna said. “But I had to go back. They needed me.”

When her hospital in Teaneck, N.J. swelled with virus patients, she struggled with stress, burnout and a nagging fear that left her grief an open wound: “Did I give it to him? I don’t want to think about that, but it’s a possibility.”

Like the Lunas, many who have been treating the millions of coronavirus patients in the United States over the past year come from families defined by medicine. It is a calling passed through generations, one that binds spouses and connects siblings who are states apart.

It’s a bond that brings the succor of shared experience, but for many, the pandemic has also introduced a host of fears and stresses. Many have worried about the risks they’re taking and those their loved ones face every day, too. They worry about the unseen scars left behind.

Shawki Zuabi, spent his last days in her hospital, UCI Health in Orange County, Calif., before dying of Covid on Jan. 8. The younger Dr. Zuabi almost immediately returned to work, hoping to keep going through purpose and her colleagues’ camaraderie.

She had expected that working alongside the people who had cared for her father would deepen her commitment to her own patients, and to some extent it has. But mainly, she came to realize how important it is to balance that taxing emotional availability with her own well-being.

“I try to always be as empathetic and compassionate as I can,” Dr. Zuabi said. “There’s a part of you that maybe as a survival mechanism has to build a wall because to feel that all the time, I don’t think it’s sustainable.”

Work is filled with reminders. When she saw a patient’s fingertips, she recalled how her colleagues had also pricked her father’s to check insulin levels.

20 percent in Sweden have parents with medical degrees, and researchers believe the rate is similar in the United States.

A nurse’s brother tended to her when she had the virus before volunteering in another virus hot spot. A doctor had a bracing talk with her children about what would happen if she and her husband both died from the virus. And others described quietly weeping during a conversation about wills after putting their children to bed.

anxiety, fatigue and burnout for a growing number of health care workers. Nearly 25 percent of them most likely have PTSD, according to a survey that the Yale School of Medicine published in February. And many have left the field or are considering doing so.

Donna Quinn, a midwife at N.Y.U. Health in Manhattan, has worried that her son’s experience as an emergency room physician in Chicago will lead him to leave the field he only recently joined. He was in his last year of residency when the pandemic began, and he volunteered to serve on the intubation team.

“I worry about the toll it’s taking on him emotionally,” she said. “There have been nights where we are in tears talking about what we’ve encountered.”

She still has nightmares that are sometimes so terrifying that she falls out of bed. Some are about her son or patients she can’t help. In one, a patient’s bed linens transform into a towering monster that chases her out of the room.

When Ms. Luna first returned to her emergency room at Holy Name Medical Center in Teaneck, N.J., after her father died, she felt as though something was missing. She had gotten used to having him there. It had been nerve-racking as every urgent intercom call for a resuscitation made her wonder, “Is that my dad?” But she could at least stop by every now and again to see how he was doing.

More than that though, she had never known what it was like to be a nurse without him. She remembered him studying to enter the field when she was in elementary school, coloring over nearly every line in his big textbooks with yellow highlighter.

Over breakfast last March, Ms. Luna told her father how shaken she was after holding an iPad for a dying patient to say goodbye to a family who couldn’t get into the hospital.

“This is our profession,” she recalled Mr. Luna saying. “We are here to act as family when family can’t be there. It’s a hard role. It’s going to be hard, and there will be more times where you’ll have to do it.”

In the grand sweep of world history, the U.S. is a young country. Even so, there are plenty of homes built prior to the American Revolution that still … END_OF_DOCUMENT_TOKEN_TO_BE_REPLACED

DONETSK REGION, Ukraine — Between the cracks of mortar fire and the metallic bangs of Russian self-detonating mines, Yurii, a Ukrainian Army medic, … END_OF_DOCUMENT_TOKEN_TO_BE_REPLACED