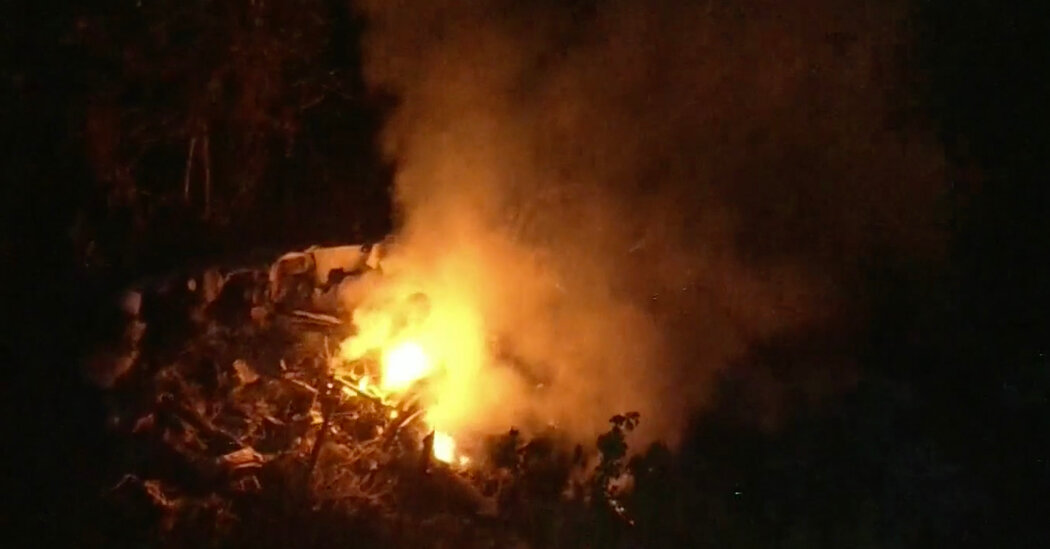 At least one person was killed when a helicopter crashed near a Florida airport on Tuesday, the authorities said. The three others who were onboard remained unaccounted for as of Wednesday morning.

A Sikorsky UH-60 firefighting helicopter, also known as a Black Hawk, crashed into a marsh near Leesburg International Airport during a training exercise at about 4 p.m., the Federal Aviation Administration said in a statement.

Leesburg is about 40 miles northwest of Orlando.

The crash appeared to be a total loss, and no survivors have been found, according the Leesburg Fire Department, which responded to the scene along with the Leesburg Police Department.

One death was confirmed, the Fire Department said, and crews were on the scene “mitigating the emergency and searching for survivors.”

The United States Forest Service plowed a line around the crash to prevent any vegetation fires, the fire department said.

The F.A.A. and the National Transportation Safety Board were to begin investigating the crash on Wednesday, officials said.

when their chopper crashed near a glacier in Alaska. In February, three Idaho Army National Guard pilots were killed when their helicopter crashed in bad weather during a routine training mission. About two weeks earlier, a New York Army National Guard Black Hawk helicopter on a routine training mission crashed in a rural area south of Rochester, New York, killing three Guard members.

MIAMI — In a welcome but likely brief victory for supporters of abortion rights, a judge in Florida blocked a state law banning abortions after 15 … END_OF_DOCUMENT_TOKEN_TO_BE_REPLACED

NEW YORK--(BUSINESS WIRE)--Stake, which provides Cash Back and banking services to renters, announced today the completion of its $12 million Series A … END_OF_DOCUMENT_TOKEN_TO_BE_REPLACED

The Sacramento home where Ronald and Nancy Reagan lived during his tenure as governor of California has hit the market for $5 million.Built in 1929, … END_OF_DOCUMENT_TOKEN_TO_BE_REPLACED