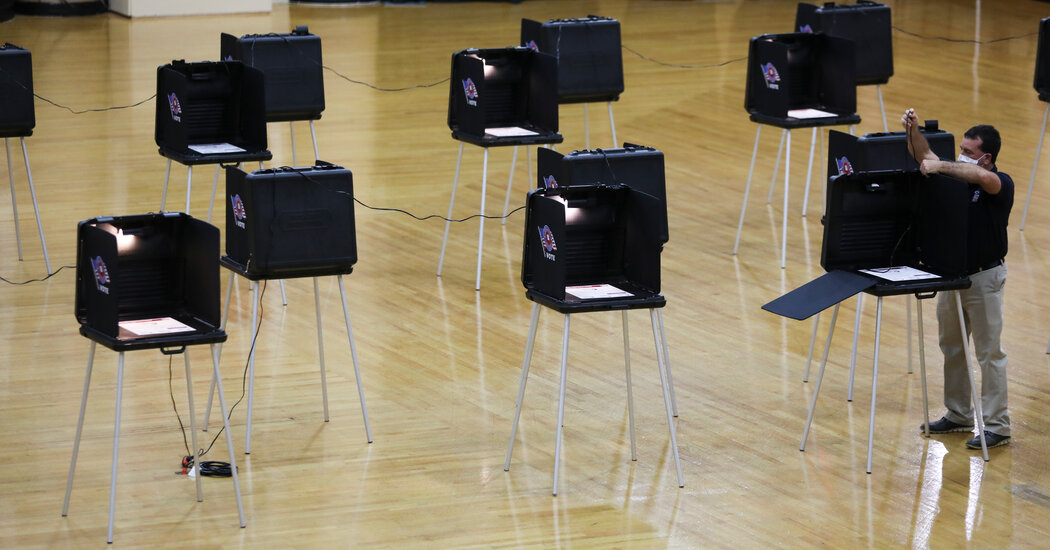 Georgia toughened identification requirements for absentee voting. Arizona authorized removing voters from the rolls if they do not cast a ballot at least once every two years. Florida and Georgia cut back sharply the use of drop boxes for mail-in ballots.

All of these new voting restrictions would have been rejected or at least softened if a federal civil rights protection from the 1960s were still intact, experts in election law said.

For decades, the heart of the landmark Voting Rights Act of 1965 was a practice known as preclearance, largely detailed under Section 5 of the statute. It forced states with a history of racial discrimination to seek approval from the Department of Justice before enacting new voting laws. Through preclearance, thousands of proposed voting changes were blocked by Justice Department lawyers in both Democratic and Republican administrations.

In 2013, however, Section 5 was hollowed out by the Supreme Court, as Chief Justice John G. Roberts Jr. wrote in a majority opinion that racial discrimination in voting no longer constituted a significant threat.

passed the John Lewis Voting Rights Advancement Act, which would restore preclearance in several states, among other changes. Attorney General Merrick B. Garland has urged Congress to revive preclearance, but Senate Republicans oppose such a move, and a filibuster in the Senate threatens to sink the bill before it can reach President Biden’s desk.

a study by the University of California, Berkeley, School of Law.

Again and again this year, states have enacted voting restrictions that closely track measures that were flagged and rejected years ago under preclearance.

In Georgia, a law that toughened ID requirements for absentee voting will have a disproportionate effect on Black voters, who make up about a third of the electorate. More than 272,000 registered voters lack the forms of identification that are newly required to cast absentee ballots, according to a study by The Atlanta Journal-Constitution. More than half of them are Black.

“If you have a voter-ID law where a lot of people don’t have one of the IDs, that’s a red flag,” said Jon Greenbaum, chief counsel for the Lawyers’ Committee for Civil Rights Under Law and a former voting rights lawyer for the Justice Department under the Clinton and George W. Bush administrations.

Mr. Perez, the head of the civil rights division from 2009 to 2013, recalled an Arizona bill that proposed barring third parties from dropping off absentee ballots on behalf of voters. The Navajo Nation protested that some of its communities were hours from the nearest mailbox, making the act of voting by mail an arduous one.

The Justice Department pushed back at Arizona lawmakers in preclearance, Mr. Perez said. “We asked them a series of very pointed questions because we had real concerns that it was discriminatory, and they withdrew it,” he said. “As a result of the questions we asked, Section 5 worked in that case. But once Section 5 was emasculated in 2013, they had free rein to enact it.”

Republicans across the country have defended the new voting laws and denied they are restrictive, often repeating the mantra that the laws make it “easier to vote, harder to cheat.”

Gov. Brian Kemp of Georgia called a Justice Department lawsuit over the state’s new ID requirements “disgusting” and a “politically motivated assault on the rule of law.”

Republicans do not dispute that the current Department of Justice, under Mr. Garland, would have challenged the new laws under Section 5. But they argue that the Biden administration is focusing on the politics of voting rights and not on the merits of the laws.

“Laws that would have likely been pre-cleared in a previous Democratic administration would be easily objected to by the current Biden administration,” said Justin Riemer, the chief counsel at the Republican National Committee.

He added: “And it is very apparent to us that their determinations would be politically motivated in stopping states from enacting reasonable regulations that protect the integrity of their election processes.”

Six former leaders of the civil rights division under Republican presidents from Ronald Reagan to Donald J. Trump declined to comment or did not respond to requests to comment.

objected to a Georgia proposal that would purge registered voters from the rolls if they failed to vote for three years unless they reaffirmed their registration status. He said the Arizona law struck him as another example of purging.

“I think purging is one of the more pernicious undertakings, and I say this as somebody who is preternaturally neat,” Mr. Patrick said. “It is easier in many states today to keep a driver’s license than it is to keep your voter registration.”

Gov. Doug Ducey of Arizona, a Republican, insisted that the new law was about election integrity. Active voters would still get ballots, while resources would be freed for “priorities like election security and voter education,” he said in a video after signing the bill. “Not a single Arizona voter will lose their right to vote as a result of this new law.”

“When the margin of victory was as slim as it was, the notion that the provisional ballots might not be counted because of some very technical and frankly trivial issue, that’s a problem,” Mr. Patrick said.

Voting rights lawyers also liken new laws curbing the use of drop boxes to past attempts — blocked by the Justice Department under preclearance — to reduce the numbers of polling places or absentee-ballot locations.

In 1984 alone, for example, Reagan administration lawyers objected to the relocation of a Dallas polling place to a predominantly white community from a largely Black one, and challenged bills in Arizona that would have reduced access to polling places by rotating locations and cutting operating hours.

In Georgia, 56 percent of absentee voters in urban Fulton County and suburban Cobb, DeKalb and Gwinnett counties returned their ballots in drop boxes, according to The Atlanta Journal-Constitution. Under Georgia’s new law, those counties will now have just 23 drop boxes, compared with 94 during the 2020 election.

And in Texas last year, with roughly a month left before Election Day, Gov. Greg Abbott directed counties to offer only one location for voters to drop off mail-in ballots.

“So you had counties with four million people and it was one place essentially to drop off your ballot,” said Chad Dunn, a longtime voting-rights lawyer. “Those are provisions that would have been stopped immediately.”

The Mississippi River town of Ste. Genevieve, MO, might be the ideal spot for a buyer in search of a refreshing idea.This mixed-use structure on the … END_OF_DOCUMENT_TOKEN_TO_BE_REPLACED

More From ForbesJan 26, 2022,09:00am ESTCompany Named For Jetsons Son Unveils Autonomous Cargo EVTOL Drone Of The Near … END_OF_DOCUMENT_TOKEN_TO_BE_REPLACED

The prison in Hasaka where thousands of Islamic State fighters are held, in 2019.Credit...Ivor Prickett for The New York TimesThe prison at the center … END_OF_DOCUMENT_TOKEN_TO_BE_REPLACED