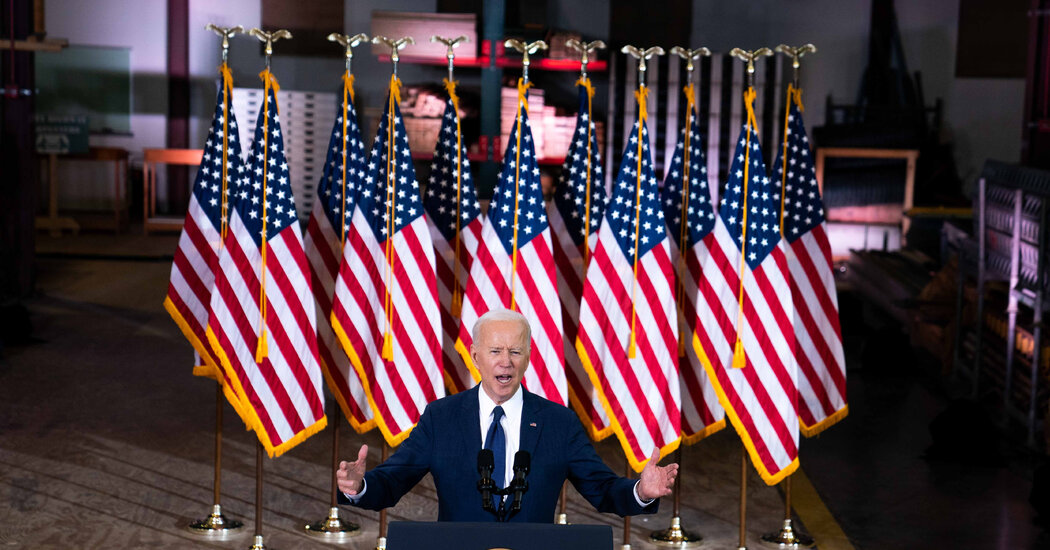 “This is a game changer,” Gov. Gavin Newsom exulted last week during a news conference. “We are very, very enthusiastic.”

Was he talking about his recent coronavirus vaccination? The latest poll in the recall campaign?

No, he was reveling in news from what has long been California’s sweet spot — infrastructure, baby.

Perhaps more than any other part of the country, California stands to benefit from the $2.2 trillion proposal introduced last week by President Biden. As our colleague Jim Tankersley and others reported (and detailed for The Upshot and “The Daily”), the sweeping plan would inject huge sums of money into wider roads, faster internet, high-speed trains, charging stations for electric cars, airport terminals, upgraded water pipes and much more.

If it passes — a big if — the state that conjured Los Angeles out of the chaparral and the nation’s agribusiness capital out of the swamps of the Central Valley will have big plans for the federal money.

regional project to significantly lower greenhouse gas emissions from Los Angeles traffic, said last week that if he could pick just one project to fund from the Biden bill, it would be to accelerate the replacement of those aging port trucks.

weaning itself from fossil fuels for decades. The state requires utilities to use increasing amounts of wind and solar power each year, and last year Mr. Newsom issued an executive order requiring that all new cars sold in the state be zero-emission vehicles by 2035.

The Biden plan would supercharge that effort with federal incentives to drive zero-emission vehicles rather than gas guzzlers and fund the build-out of tens of thousands of charging stations to make electric cars more convenient to drive.

Buses: The state’s transit agencies are moving toward replacing all diesel-fueled buses within the next two decades. The Biden bill would replace 50,000 diesel public transit vehicles and 20 percent of school buses with vehicles that run on alternative fuel.

That would not only cut down on emissions in the state, but also support the state’s clean tech sector. At least four alternative fuel bus manufacturers are based in California, as are companies such as Silicon Valley’s Zum, which is replacing Bay Area school buses with a fleet of electric ride-sharing vans.

Rail: The package as proposed would provide $80 billion for rail projects in California. The state’s embattled high-speed rail project, passed by voters in 2008 but politically shunned in recent years as too expensive, is unlikely to score a windfall, but other projects could benefit, according to a Los Angeles Times analysis.

Among them: high-speed electrification of the rail system between Anaheim and Burbank; construction of a 1.3-mile tunnel to extend passenger rail into downtown San Francisco; and shortening the ride from Los Angeles to San Diego by straightening that rail line.

The San Francisco Chronicle reports that the plan also could increase the capacity of BART, the Bay Area’s transit system, extending it to San Jose and Santa Clara and perhaps connecting high-speed rail to the region. Amtrak also wants to create 30 new routes with the proposed funding, including between Los Angeles and Las Vegas, and to add more trains between San Diego and Los Angeles.

Water: Rural communities throughout the state contend with contaminated drinking water, particularly in the Central Valley. The state has struggled with the cost of cleanup for years. The Biden bill has $66 billion to address water systems nationally.

Broadband: In the state that gave rise to Silicon Valley, more than a quarter of public school students still lack reliable internet access — an issue laid bare during the past year as schools shifted to remote instruction during the pandemic. The bill would spend $100 billion nationally on high-speed broadband.

In-home care: The bill also includes $400 billion to expand access to caregiving for people who are older and disabled, and to improve pay and benefits for caregivers. California is projected to have a higher proportion of residents over 65 than Florida within the next decade.

AUSTIN, Texas--(BUSINESS WIRE)--As the first multifamily management company to be recognized in the Public Relations and Marketing Excellence Awards, … END_OF_DOCUMENT_TOKEN_TO_BE_REPLACED

There have been whispers of cooling housing and rental prices in the San Francisco Bay Area, but that hasn't yet translated into practical, noticeable … END_OF_DOCUMENT_TOKEN_TO_BE_REPLACED

Cars pass in Independence Square at twilight in Kyiv, Ukraine, Monday, Oct. 31, 2022. Rolling ... [+] blackouts are increasing across Ukraine as the … END_OF_DOCUMENT_TOKEN_TO_BE_REPLACED