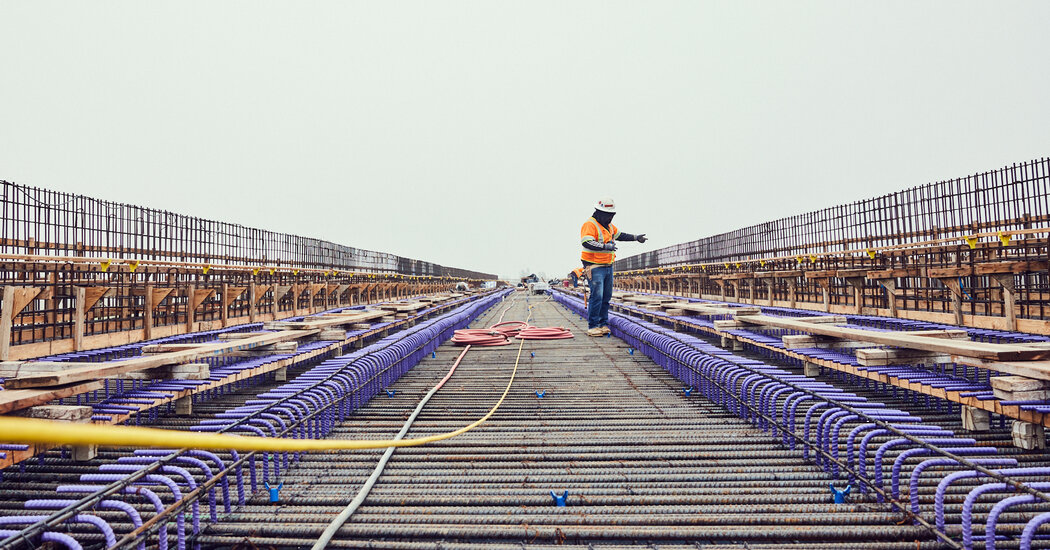 LOS ANGELES — Building the nation’s first bullet train, which would connect Los Angeles and San Francisco, was always going to be a formidable technical challenge, pushing through the steep mountains and treacherous seismic faults of Southern California with a series of long tunnels and towering viaducts.

But the design for the nation’s most ambitious infrastructure project was never based on the easiest or most direct route. Instead, the train’s path out of Los Angeles was diverted across a second mountain range to the rapidly growing suburbs of the Mojave Desert — a route whose most salient advantage appeared to be that it ran through the district of a powerful Los Angeles county supervisor.

The dogleg through the desert was only one of several times over the years when the project fell victim to political forces that have added billions of dollars in costs and called into question whether the project can ever be finished.

Now, as the nation embarks on a historic, $1 trillion infrastructure building spree, the tortured effort to build the country’s first high-speed rail system is a case study in how ambitious public works projects can become perilously encumbered by political compromise, unrealistic cost estimates, flawed engineering and a determination to persist on projects that have become, like the crippled financial institutions of 2008, too big to fail.

The goal in California in 2008 was to carry passengers between Los Angeles and San Francisco in 2 hours 40 minutes, putting it among the fastest trains in the world in average speed.

The most direct route would have taken the train straight north out of Los Angeles along the Interstate 5 corridor through the Tejon Pass, a route known as “the Grapevine.” Engineers had determined in a “final report” in 1999 that it was the preferred option for the corridor.

But political concerns were lurking in the background. Mike Antonovich, a powerful member of the Los Angeles County Board of Supervisors, was among those who argued that the train could get more riders if it diverted through the growing desert communities of Lancaster and Palmdale in his district, north of Los Angeles.

The extra 41 miles to go through Palmdale would increase costs by 16 percent, according to the 1999 report, a difference in today’s costs of as much as $8 billion.

involved bitter litigation against well-resourced farmers, whose fields were being split diagonally.

Federal grants of $3.5 billion for what was supposed to be a shovel-ready project pushed the state to prematurely issue the first construction contracts when it lacked any land to build on. It resulted in hundreds of millions of dollars in contractor delay claims.

“The consequence of starting in the Central Valley is not having a system,” said Rich Tolmach, who headed the nonprofit California Rail Foundation that promotes public rail transit and was deeply involved in the early days of the project. “It will never be operable.”

Which Path Through the Mountains?

More political debate ensued over what route the train would take into the San Francisco Bay Area. The existing rail corridor through Altamont Pass, near Livermore, was a logical alternative. The French engineering company Setec Ferroviaire reported that the Altamont route would generate more ridership and have fewer environmental impacts.

But as with so many decisions on the project, other considerations won the day. There was heavy lobbying by Silicon Valley business interests and the city of San Jose, which saw the line as an economic boon and a link to lower cost housing in the Central Valley for tech employees. They argued for routing the train over the much higher Pacheco Pass — which would require 15 miles of expensive tunnels.

In 2008, the rail authority issued its record of decision.

“It absolutely has to go through Pacheco and up through San Jose,” Mr. Richards said.

AUSTIN, Texas--(BUSINESS WIRE)--As the first multifamily management company to be recognized in the Public Relations and Marketing Excellence Awards, … END_OF_DOCUMENT_TOKEN_TO_BE_REPLACED

There have been whispers of cooling housing and rental prices in the San Francisco Bay Area, but that hasn't yet translated into practical, noticeable … END_OF_DOCUMENT_TOKEN_TO_BE_REPLACED

Cars pass in Independence Square at twilight in Kyiv, Ukraine, Monday, Oct. 31, 2022. Rolling ... [+] blackouts are increasing across Ukraine as the … END_OF_DOCUMENT_TOKEN_TO_BE_REPLACED