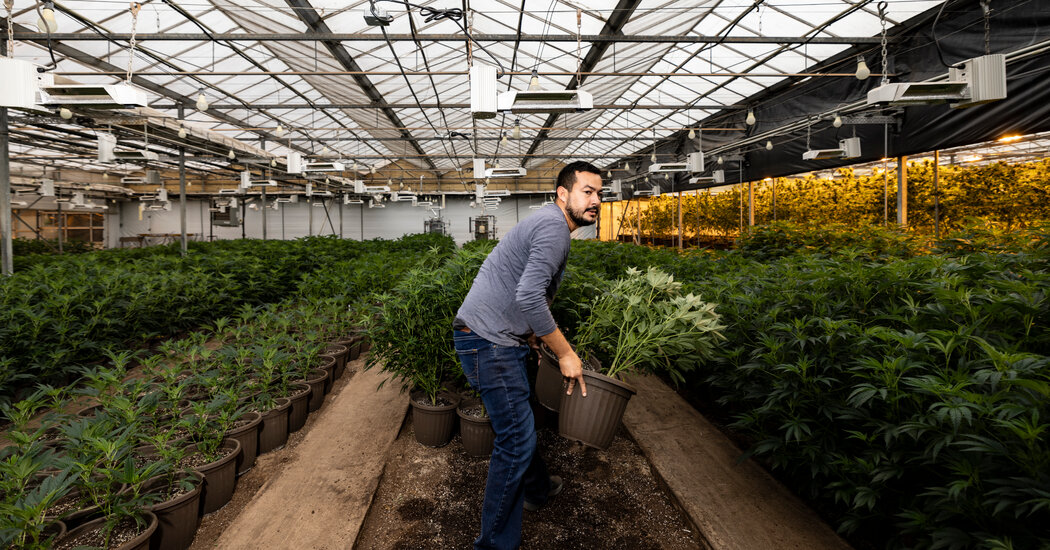 KEOTA, Okla. — Across Oklahoma, a staunchly conservative state with a history of drawing people in search of wealth from the land, a new kind of crop is taking over old chicken coops, trailer parks and fields where cattle used to graze.

Next door to a Pentecostal church in the tiny town of Keota, the smell of marijuana drifts through the air at the G & C Dispensary. Strains with names like OG Kush and Maui Waui go for $3 a gram, about a quarter of the price in other states.

Down the road, an indoor-farming operation is situated in a residential area near mobile homes, one of about 40 in the town of just 500 residents. “It might look strange, but this is where the action is,” said Logan Pederson, 32, who moved this year from Seattle to Oklahoma to manage the small farm for a company called Cosmos Cultivation.

about 10 percent of Oklahoma’s nearly four million residents have one, by far the most of any other state.

Fueled by low barriers for entry and a fairly hands-off approach by state officials, weed entrepreneurs have poured into Oklahoma from around the United States. It costs just $2,500 to get started, compared to $100,000 or more across the state line in Arkansas. And Oklahoma, a state that has long had a tough-on-crime stance, has no cap on how many dispensaries can sell marijuana, the number of cannabis farms or even how much each farm can produce.

That unfettered growth has pitted legacy ranchers and farmers against this new breed of growers. Groups representing ranchers, farmers, sheriffs and crop dusters recently joined forces to call for a moratorium on new licenses. They cited climbing prices for land, illicit farms and strains on rural water and electricity supplies as among the reasons. In some parts, new indoor farms are using hundreds of thousands of gallons of water.

$138 million in revenue from retail, state and local taxes this year, through November, on the sale of cannabis.

Ms. Berry, an early opponent of medical cannabis, says the industry is here to stay and that the state’s marijuana law effectively restrains her agency from limiting the number of new licenses it approves.

On the ground level, that means that the number of Oklahoma cannabis businesses keeps on surging.

Mr. Pederson, the transplant from Seattle, had served in the Army and was looking for a new career when he learned earlier this year about growing cannabis in Oklahoma. Despite being new to the industry, he moved on his own to Keota to supervise the small, five-person farm, which he said was supplying dispensaries in the state.

“There’s culture shock for outsiders,” Mr. Pederson said about moving to a tiny Oklahoma town. He said he plans to stay in the state for at least the next five years.

Signs of the explosive growth are hard to miss. There are now towns with far more dispensaries than food stores. And cannabis operations now outnumber wheat and cotton farms. The industry has also created thousands of jobs in a state that remains among the poorest in the country. Supporters of the industry also argue that the less punitive approach to possession of marijuana and other drugs, along with other sentencing reforms, has eased pressures on the state’s prisons.

operation that had moved from Colorado to Oklahoma.

Momentum is building for an even more forceful crackdown. Senator James Inhofe, a Republican, requested $4 million this year in direct funding from the federal government for the Oklahoma Bureau of Narcotics to combat illegal farms. And a bill introduced in the State Legislature would allow county and city authorities to impose their own caps on licenses.

While the influx intensifies, growers have groused that the ever-expanding supply has made cannabis prices plunge by about half in the last six months, to as low as $800 a pound for some strains, down from $1,600.

Tara Tischauer, co-owner of Red Dirt Sungrown in Guthrie, a town north of Oklahoma City, said falling prices have reduced her revenue by about one-third this year. Still, her operation, part of a family business that also includes a hemp farm and garden plant greenhouses, employs 25 people and steadily produces about 125 pounds of cannabis a week.

“A few years ago I thought Oklahoma would have been the last state in the country to get cannabis going,” said Ms. Tischauer, 46. “If we can’t succeed, it’s our own fault. That’s how a free market works.”

Despite a saturated market, she said she believes the state’s cannabis industry is still in its infancy. Activists have begun organizing to secure a referendum on the ballot next year that would legalize recreational use of marijuana. Doing so could bolster the state’s growers, who Ms. Tischauser said could look to meet demand from neighboring Texas, where legislators have resisted full legalization of cannabis.

For critics of Oklahoma’s approach to marijuana, that would be a move in the wrong direction.

“It smells like weed all the damn time, even right here in our offices,” said Haskell County’s Sheriff Tim Turner, a Republican, pointing toward one of the dozens of licensed marijuana farms in his county, this one across the road from his department. “We’re one of the reddest states around, but we have the country’s most permissive marijuana laws.”

AUSTIN, Texas--(BUSINESS WIRE)--As the first multifamily management company to be recognized in the Public Relations and Marketing Excellence Awards, … END_OF_DOCUMENT_TOKEN_TO_BE_REPLACED

There have been whispers of cooling housing and rental prices in the San Francisco Bay Area, but that hasn't yet translated into practical, noticeable … END_OF_DOCUMENT_TOKEN_TO_BE_REPLACED

Cars pass in Independence Square at twilight in Kyiv, Ukraine, Monday, Oct. 31, 2022. Rolling ... [+] blackouts are increasing across Ukraine as the … END_OF_DOCUMENT_TOKEN_TO_BE_REPLACED