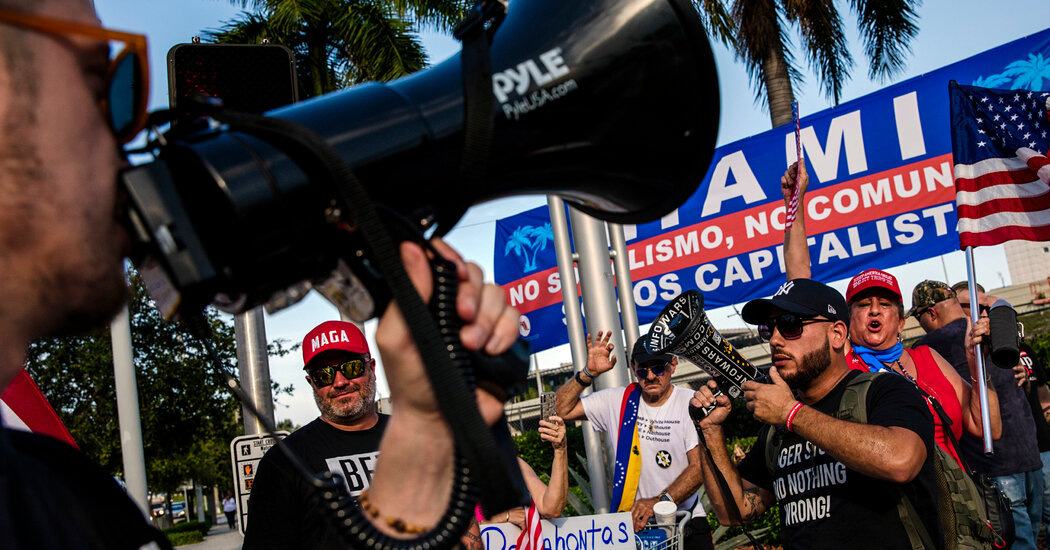 MIAMI — At the iconic Fontainebleau hotel in Miami Beach, just after Gov. Ron DeSantis of Florida rallied donors and activists to their feet during a well-attended April fund-raiser for the Republican Party of Miami-Dade County, a scuffle broke out by the valet parking station. Several men in suits and a woman in a cocktail dress tussled over who should and should not have been allowed at the $250-a-plate dinner.

Someone alerted the police. The next day, a woman who had been escorted out of the dinner renewed a request for a restraining order against one of the men involved in the dispute, writing in her court petition that he was part of a “Far Right Wing Extremist Cult.” She was referring to the Proud Boys, the far-right nationalist group that was at the forefront of the riot at the U.S. Capitol last year.

The man was one of at least a half-dozen current and former Proud Boys who have secured seats on the Miami-Dade Republican Executive Committee, seeking to influence local politics from the inside. Their ranks include adherents who face criminal charges for participating in the Capitol attack: Gilbert Fonticoba has been charged with obstructing Congress. Gabriel Garcia, a former Army captain who says he has left the group, has been charged with interfering with law enforcement officers during the civil disorder on Jan. 6, 2021.

The concerted effort by the Proud Boys to join the leadership of the party — and, in some cases, run for local office — has destabilized and dramatically reshaped the Miami-Dade Republican Party that former Gov. Jeb Bush and others built into a powerhouse nearly four decades ago, transforming it from an archetype of the strait-laced establishment to an organization roiled by internal conflict as it wrestles with forces pulling it to the hard right. The conflict comes at a pivotal moment for Republicans nationally, as primary voters weigh whether to wrench the party from its extremist elements — or more fully embrace them.

get involved in local issues, with the goal of amassing support in advance of this year’s midterm elections.

“The plan of attack if you want to make change is to get involved at the local level,” Jeremy Bertino, a prominent member of the North Carolina Proud Boys, told The New York Times last year in the midst of the shift.

What they intend to do with their power is unclear. Still, following a trend pushed by far-right figures like Stephen K. Bannon, Proud Boys started showing up at school board meetings to protest coronavirus mask mandates and the teaching of antiracist curriculum.

In California’s Central Valley, members of the group have intimidated protesters who did not want a church to buy an L.G.B.T.Q.-friendly theater in Fresno. A Proud Boy declared his candidacy for the Oregon Legislature. A former Proud Boy in Kansas lost a race for a Topeka City Council seat.

vastly improved their showing in 2020, a swing that has soured Democrats’ prospects.

Chris Barcenas, a Republican committeeman and Proud Boy, said he started thinking about running for a committeeman seat about a year ago.

“Instead of sitting on the sidelines complaining about RINOs or whatever,” he said, referring to “Republicans in name only,” “I realized that in order to make changes, I had to be involved and be part of the process.”

Mr. Barcenas, 34, voluntarily testified a few months ago to the House select committee investigating the events of Jan. 6 about his understanding of the Proud Boys’ role in the Capitol attack. He protested at the Capitol that day but did not go into the building and has not been charged with any crimes.

Gabriel Garcia, 37, who has pleaded not guilty to the charges from the Capitol attack, said the party was once the province of country-club Republicans.

were involved in a belligerent protest at a Democratic campaign event featuring Nancy Pelosi, the speaker of the U.S. House. Mr. Diaz banged on a door — for which he later apologized — as a rowdy mob and the Proud Boys yelled outside. Mr. Diaz and the Proud Boys said they did not know each other or coordinate their actions.

After that ugly scene, Mr. Diaz said he made party members who had not previously signed a Republican loyalty oath give up their seats.

to attack people who were protesting Confederate street names in Hollywood, Fla. He pleaded no contest to aggravated assault and served probation.

Mr. Monzon, now 26 and the vice president of the Miami Springs Republican Club, said he had been on a “path to de-radicalization” and disavowed the racist ideology he previously espoused. Still, when he ran unsuccessfully for the Hialeah City Council last year, he maintained some ties online to some of his League of the South friends.

He said the Proud Boys in the party assumed he would support them because of his past views.

“I’ve always been known as the radical one, so they were like, ‘Yeah, man, we’re going to get more of our people in here,’” he said.

Online sleuths, including a group called Miami Against Fascism, have identified party members who are or appear to be Proud Boys or otherwise affiliated with the far right and chronicled their social media activity, revealing connections to national figures and internal quarrels — including the Fontainebleau altercation on April 22.

Security escorted the woman and her husband out. But a friend of the woman’s and the friend’s husband remained.

Later that evening, the friend’s husband scrapped with Mr. Barcenas and Mr. Salgueiro. The friend said in court filings and in an interview that when she went outside to pay the valet she was also confronted by Mr. Salgueiro, whom she identified as a Proud Boy. He declined to comment.

In the days after, more accusations and petitions flew in court. On April 27, a West Miami Police officer served Mr. Salgueiro with restraining orders. He found him at the monthly meeting of the Miami-Dade Republican Party.

DALLAS — The rollback of abortion rights has been received by many American women with a sense of shock and fear, and warnings about an ominous … END_OF_DOCUMENT_TOKEN_TO_BE_REPLACED

The poshest place in California's Coachella Valley is The Madison Club. This exclusive gated community in La Quinta is where A-listers and tycoons … END_OF_DOCUMENT_TOKEN_TO_BE_REPLACED