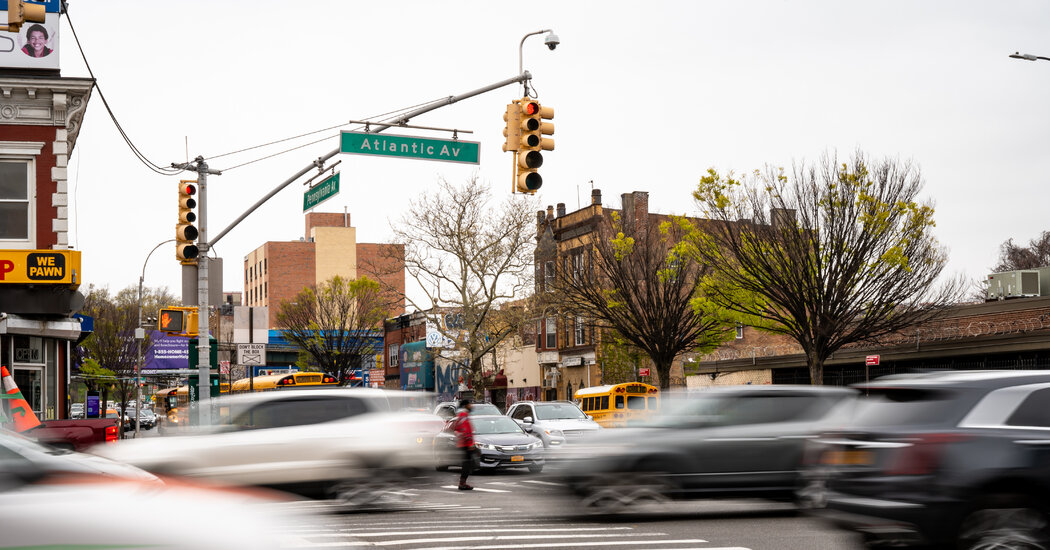 A new billboard in East New York shows a pedestrian thrown into the air after bouncing off the front of a car, as his coffee splashes everywhere. “Speeding ruins lives,” it says. “Slow down.”

The goal of the campaign is to scare speeding drivers in this Brooklyn neighborhood, where 35 people have been killed in traffic crashes since 2017.

It is part of New York City’s latest effort to battle rampant speeding, which has turned neighborhood streets into raceways and propelled traffic deaths to the highest level in eight years.

pandemic boom in cycling and electric bikes, scooters and skateboards.

Just over one-quarter of the 64 deaths this year were on highways — including three deaths each on Henry Hudson Parkway and Grand Central Parkway — while the rest were on local streets throughout the city.

The traffic deaths have reversed some of the hard-won gains of the city’s eight-year-old transportation policy, called Vision Zero, which once aimed to eliminate all traffic deaths and had become a national model. Under the policy, the city won state approval to lower the speed limit to 25 m.p.h. from 30 m.p.h. on most streets, built a sprawling network of nearly 2,000 automated speed cameras, and redesigned many streets to make them safer for pedestrians and cyclists.

Mayor Eric Adams, who took office in January, has promised to expand on Vision Zero efforts. He recently pledged $904 million to the city’s streets plan over the next five years, which will include redesigning dangerous intersections and adding more protected bike lanes and pedestrian areas. He has said police officials will also increase enforcement of traffic laws.

epidemic of speeding and reckless driving around the country during the pandemic in part as some drivers have become emboldened by emptier roads and lax police enforcement, according to transportation experts. New York City has also seen a rise in car ownership as many people have avoided public transit.

Even before the pandemic, a growing number of cities sought to lower speed limits and design safer roads over concerns that higher speeds and larger vehicles like S.U.V.s led to more severe injuries and fatalities.

“The risk of death exponentially increases as speed increases,” said Alex Engel, a spokesman for the National Association of City Transportation Officials. “This is especially important as the vehicles on the streets have gotten larger.”

television ads showing a pedestrian or cyclist being thrown backward in slow motion. And it will target drivers on social media, based on their online searches, and run in certain print publications.

Erick Guerra, an associate professor of city and regional planning at the University of Pennsylvania, said that while media campaigns are important, they do not have the same immediate effect on slowing down drivers as, say, expanding the use of automated speed cameras. “I think it takes a long time to change a culture of driving in the same way it took a long way to change a culture of smoking,” he said.

Some transportation advocates have called on cities to focus more on redesigning dangerous streets, saying that it is not enough to come into a neighborhood and tell drivers not to speed when its streets were essentially built to move traffic as fast as possible.

“It’s a vicious cycle,” said Leah Shahum, the executive director of the Vision Zero Network, a non-profit campaign. “Why is there speeding here? It’s because of the environment we built.”

In East New York, the billboard there will be seen by drivers going through a particularly dangerous intersection at Atlantic and Pennsylvania Avenues, where 167 people — including 154 motor vehicle occupants — were injured in crashes from 2015 to 2019, according to the latest data available.

Laura Remigio, 35, a makeup artist and stylist who said she was almost hit by a car while visiting a client in East New York, said that drivers go too fast and have cut her off in the crosswalk. “It’s supposed to be people first and the cars wait — and they don’t wait,” she said. “I’m running because the cars don’t stop.”

But Ian Johnson, 67, a driver from New Jersey, said that some pedestrians also need to pay more attention. He said he often has to honk at people who don’t look as they cross or are on their phones “when they almost walk into my vehicle.”

Mr. Candelario, whose auto repair shop is steps away from the billboard, said he hoped the billboard would finally get the attention of drivers.

“It’s an eye opener and it makes you think,” he said. “You’ve got to be hard. You’ve got to put a little fear in it.”

Daniel Acker | Bloomberg | Getty ImagesHome prices are softening in most markets across the nation.Yet home prices are still higher compared with a … END_OF_DOCUMENT_TOKEN_TO_BE_REPLACED

Joel Silver has been responsible for some of Hollywood's biggest franchises, including "The Matrix," "Die Hard," "Predator," and "Lethal Weapon."So … END_OF_DOCUMENT_TOKEN_TO_BE_REPLACED