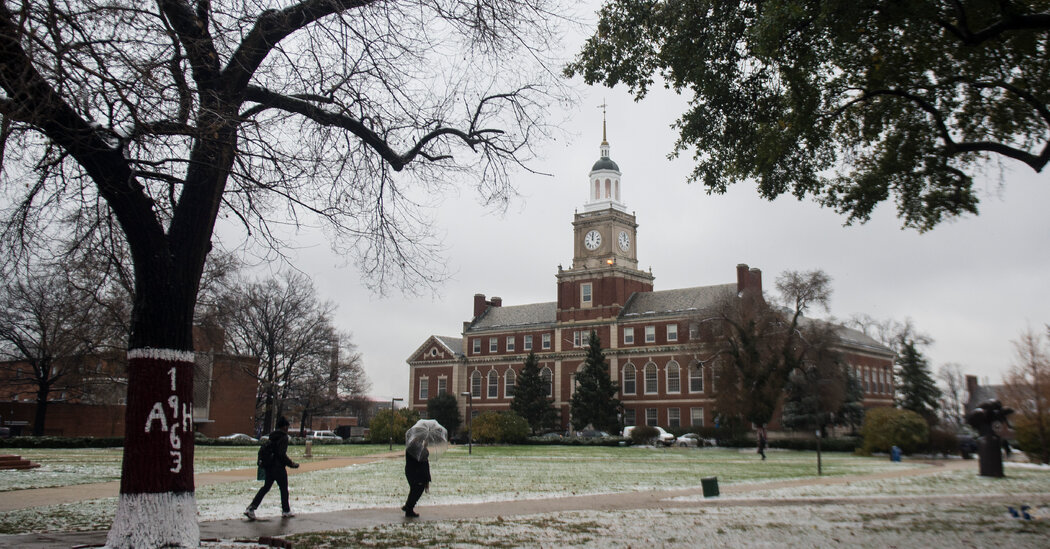 As an alumna of Howard University, Anika Prather remembers feeling that the classics were everywhere during her years as a student. No matter your major or field of study, she recalled, it was practically a given that classics would be woven into your educational experience.

“My brother was a pre-med student — we both went to Howard — and I remember sitting there seeing him read all types of classics, like we all had to, classics or some work of the canon, but then you’re reading it from a Black perspective,” Dr. Prather said. “It’s really incredible.”

At Howard, the classics department is as old as the university itself. Established in 1867 — the same year that Howard, one of the country’s leading historically Black colleges and universities, was founded — the department became a hub for Black thought, enlightening generations of students about Black people in antiquity.

Dr. Prather, now an adjunct professor of humanities, takes pride in being a part of the department. But she will soon have to leave the position, as the university plans to dissolve the department by the fall semester.

The Washington Post, has galvanized students and faculty members to preserve what the Society for Classical Studies says is the only classics department at an H.B.C.U.

Students in the department have written letters to Anthony K. Wutoh, the university’s provost and chief academic officer, highlighting the importance of classics and the field’s ties to Black history, Dr. Prather said.

Alexandria Frank, a graduating senior at Howard who is minoring in classical civilization, said that dissolving the department and dispersing its classes throughout the university was more than just an administrative reshuffling. The move, she said, would prevent the in-depth study of classics and could inhibit Black students from pursuing the field as scholars.

“That’s a huge pipeline of Black students that are being prevented from entering the academic field for classics,” Ms. Frank said, adding that the move would be detrimental not just “to the students but to the field as a whole, which desperately needs those voices.”

An online petition in support of keeping the department has been signed over 5,000 times. Students have also brought awareness to the situation by using the hashtag “#SaveHUClassics” on their social media accounts.

opinion piece with Jeremy Tate that said the university’s decision had sent “a disturbing message.”

Following a recommendation from a commission created in 2009 to review the university’s degree programs, Howard stopped offering a classics major. Today, the department offers only minors — in classical civilization, Latin and Greek. Although the department itself will be dissolved in the fall, the university said it intended to continue offering courses and minors that had been taught within the department.

“We obviously believe that the content that we offer in classics is important, but we also must contemporize that teaching with practical application,” Dr. Wutoh said, emphasizing that the university hoped to take a more interdisciplinary approach in teaching classics.

In 2017, the university started another review that examined its academic programs and reviewed them based on metrics such as enrollment and matriculation. Last fall, the university released a report on its findings and recommendations, which included a suggestion to dissolve the classics department because it “does not provide a major course of study, and general education courses may be offered through other departments.”

“One of the things I say to my students coming in is, ‘This class is going to show you how worldwide Black people are,’” she said.

At Howard, students are exposed to how themes within classics are interlaced and rooted into the works of political activists like Huey P. Newton and Angela Davis as well as Black literary thinkers such as the author Toni Morrison. The abolitionist Frederick Douglass offers a particularly sharp argument for engaging with the classics, Dr. Prather said.

“He learned as an enslaved child through reading the speakers of Cicero and all the different dialogues and classic texts to practice rhetorical skills,” she said, “so that he could know how to exercise his mind to use logic.”

This year, three Howard students will graduate with minors in classical civilization, Dr. Wutoh said. In 2020, five graduated with the minor, and in the past year, over a thousand students have taken courses in the classics department. Howard, which is in Washington, has an enrollment of about 10,000, including undergraduate, graduate and professional students.

For Tiye Williamson, 19, the classics department played a pivotal role in her decision to go to Howard. While growing up, she developed a passion for translating Latin and became fascinated with its role in biology.

“Seeing Black people translate, with such proficiency, at a place of higher learning was something that I only experienced at Howard,” said Ms. Williamson, who is pursuing an interdisciplinary humanities major.

Ms. Williamson said that even though parts of the program would stay intact, its loss as a stand-alone department would be felt.

“I feel like the classics department is just the beginning,” she said. “Other smaller departments could be on the chopping block next.”

AUSTIN, Texas--(BUSINESS WIRE)--As the first multifamily management company to be recognized in the Public Relations and Marketing Excellence Awards, … END_OF_DOCUMENT_TOKEN_TO_BE_REPLACED

There have been whispers of cooling housing and rental prices in the San Francisco Bay Area, but that hasn't yet translated into practical, noticeable … END_OF_DOCUMENT_TOKEN_TO_BE_REPLACED

Cars pass in Independence Square at twilight in Kyiv, Ukraine, Monday, Oct. 31, 2022. Rolling ... [+] blackouts are increasing across Ukraine as the … END_OF_DOCUMENT_TOKEN_TO_BE_REPLACED