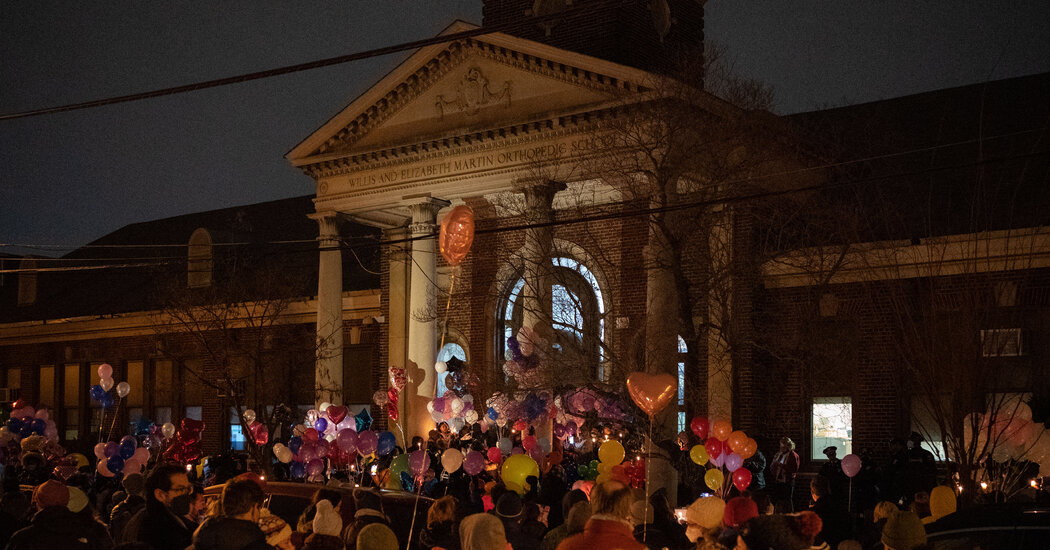 PHILADELPHIA — Family members of the 12 people who died in a fire at a Philadelphia rowhouse gathered on Thursday for a brief vigil on the steps of a local elementary school, sobbing and holding one another in the evening cold. Hundreds stood in silence as one of the family members gave an accounting of the death toll: three sisters and nine of their sons and daughters.

Investigators examining the fire are looking into the possibility that it was caused by a child playing with a lighter near a Christmas tree, according to a warrant application that was filed in state court.

The warrant application, which was earlier reported by The Philadelphia Inquirer and confirmed by a spokeswoman for the district attorney’s office, was necessary for police investigators to gain access to the apartment. Officials on Thursday emphasized that the investigation was just beginning and that no conclusions had been made.

Much remained unknown about the fire, which burned through the upper floors of a three-story rowhouse in the city’s Fairmount neighborhood on Wednesday morning, just before sunrise. Investigators said very little, beyond announcing that several agencies, including the U.S. Bureau of Alcohol, Tobacco, Firearms and Explosives, were investigating.

Officials with the Philadelphia Housing Authority, which owns the building, did talk to reporters on Thursday about why 18 people were in the four-bedroom upper apartment when the fire broke out.

When the family moved into the apartment in 2011, said Kelvin Jeremiah, president and chief executive of the housing authority, they numbered six. A decade later, Mr. Jeremiah said, the family had grown to 14, which was the number of people authorized to live there under the current lease.

He attributed the fact that there were apparently four more people than that in the apartment at the time of the fire to the holiday season. “This is the time of year when family gathers,” Mr. Jeremiah said. “We are not going to be critical of families who have suffered this unimaginable loss.”

Around the streets of the neighborhood on Thursday, the people who had watched the comings and goings of residents for years remembered the families, and particularly all of the children.

“They were No. 1 people,” said Ramon Antonio Correa, who owns the Papy Deli Grocery where some combination of the children would stop by almost every day, often buying meat and cheese to bring home to their mothers.

Donald Dennison, who worked for decades as a cashier at the closest subway station to the rowhouse, remembered the children announcing their arrival with shouting and hollering.

“One would come in and pay and hit the button, one of the adults. And then all of the sudden the kids would run in,” he said. “When I heard this, I was just devastated because I knew — I said, ‘Hold it, that’s the group!’”

But within that group, of course, there were children and adults with different stories and personalities. While the city medical examiner had not released the names of the dead, many in the neighborhood already knew.

One of the children was Destiny McDonald, who was quieter and more reserved than the others, said Andre Wright, who coached her in basketball.

“To know her was to love her, and a lot of people didn’t really get to know her — she kind of shut herself off from a lot of people,” he said. But for those who she let in, she was a “beacon of light.”

Since the fire, the Bache-Martin elementary school has served as the center of the community — where families have gathered in grief, where officials have spoken and where the hundreds came together for Thursday night’s vigil. Quintien Tate-McDonald, 16, one of the victims, went to school there and came back after he graduated, working a part-time job cleaning up in the yard. He kept up with his teachers, including Kristin Luebbert, who taught him in seventh grade.

“As much as you love all of your kids, he was one of those really memorable kids that you would never forget,” she said.

Ms. Luebbert, who started teaching at Bache-Martin in 2001 and has since left, said that many of her students’ families struggled to remain in the neighborhood as the cost of living went up. Over the decades she has lived there, she has watched corner stores close and families reluctantly move to more affordable parts of the city.

She wondered if the affection for the neighborhood is why Mr. Tate-McDonald’s family had decided to crowd into that one apartment rather than seeking to move to a larger unit elsewhere. “I’m sure they loved this neighborhood,” she said, “and realized how easy it was as a place to be for kids and for families.”

A Falcon 9 rocket launches the GPS III SV05 satellite on a mission for the U.S. Space Force on June 17, 2021.SpaceXElon Musk's SpaceX broke its own … END_OF_DOCUMENT_TOKEN_TO_BE_REPLACED

The "Dog Whisperer" is also a real estate whiz.Canine trainer Cesar Millan has quickly found a buyer for his $4 million Encino, CA, residence. The … END_OF_DOCUMENT_TOKEN_TO_BE_REPLACED