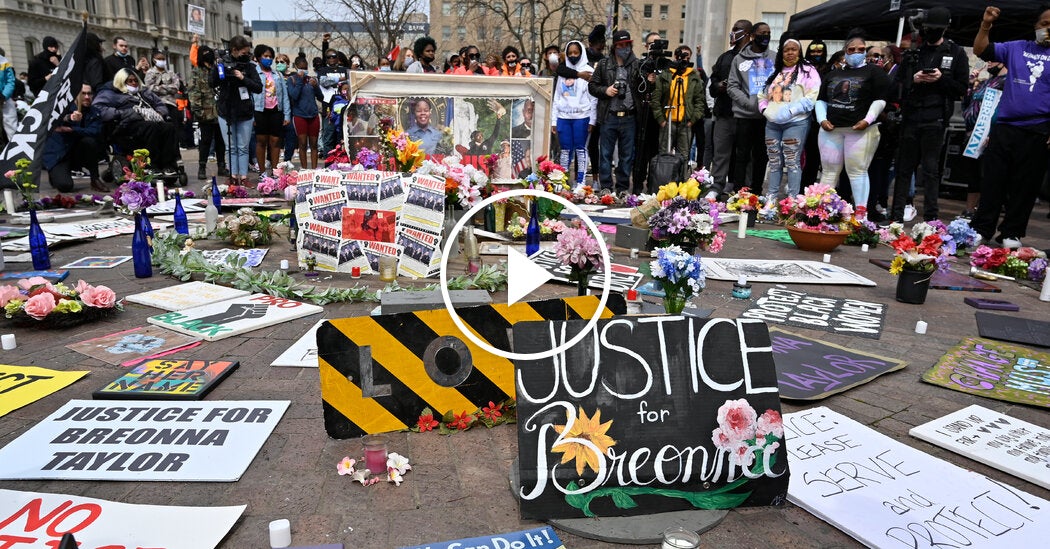 Hundreds March in Louisville a Year After Breonna Taylor’s Death

On the anniversary of her death, the family of Breonna Taylor rallied in Louisville, Ky., on Saturday alongside supporters and the families of several other people of color who were fatally shot by police around the country.

[chanting] “Breonna Taylor!” “We will never stop fighting for you and your family. We love you!” [clapping] “No justice, no peace!” “I appreciate all the love and support for Breonna and me, everywhere. Especially right here, but all across the world. We’ve got to keep going.” Crowd: “Keep going.” “That’s really all I can, you know, [inaudible] says keep going.” Crowd: “Keep going.” “Now everybody in the world is saying her name!” “Breonna Taylor!” Crowd: “Breonna Taylor!” “To all of you who kept showing up, who kept showing up, even when the county attorney said they were not going to do nothing. And then sent it over to the attorney general of the state, and he said he wasn’t going to do nothing. Well guess what? You all said, ‘You all are going to do something.’ And that’s why everybody knows Breonna Taylor’s name. It’s a good day for the D.O.J. to come arrest the cops who killed Breonna on Breeway.”

An affordable center-chimney Colonial in Glastonbury, CT, is the oldest property to hit the market this week on Realtor.com®.Offered at a steep … END_OF_DOCUMENT_TOKEN_TO_BE_REPLACED

Nissan was one of the early pioneers of the electric car. The Leaf has now sold over 600,000 units worldwide since its launch in 2011 and is still … END_OF_DOCUMENT_TOKEN_TO_BE_REPLACED

RUDNE, Ukraine — Yurii Brukhal, an electrician by trade, didn’t have a very dangerous role when he volunteered for Ukraine’s territorial defense … END_OF_DOCUMENT_TOKEN_TO_BE_REPLACED