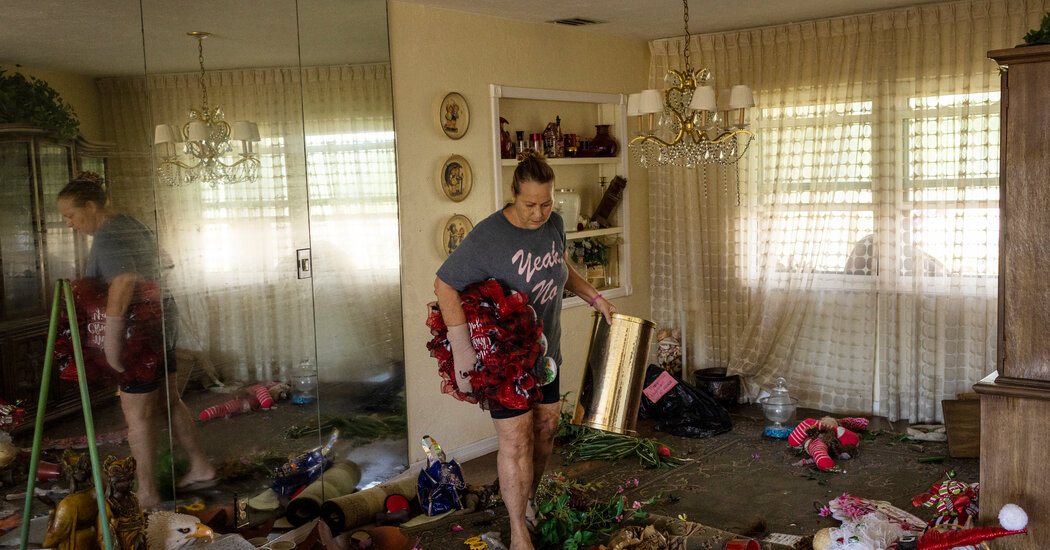 When the water slipped in, it was just a glimmer on the floor, a sign that it was time to go.

It was Wednesday, around noon, and Darcy Bishop roused her two brothers who had been resting after lunch. She pulled the wheelchair up to the oldest, Russell Rochow, 66, and heaved him into it before slipping his feet into black Velcro shoes.

Her other brother, Todd Rochow, 63, was in his room, changing out of pajamas. He could manage with a walker.

Both men had been born with cerebral palsy, and their mental development was like that of a young child. About 10 years ago, they started showing signs of Parkinson’s disease. But they found joy in their surroundings. Todd liked collecting cans at the beach and waiting for the mail carrier. Russell loved riding the bus and going to parks. And both had girlfriends.Ms. Bishop, 61, was their lifeline, their little sister who had long felt an obligation to keep them safe.

“We’ve got to get going!” she shouted to Todd. She went to open the door of their home in Naples, Fla. It would not budge. The weight of the water on the other side had cemented it shut.

She rushed to try the door to the garage. It too was stuck. Behind it was Todd’s walker.

That’s when the house the three siblings shared with their parents began to flood.

“It went from ankle-deep to knee-deep within, I don’t think it was even, five minutes,” Ms. Bishop said. “I just knew that there was no way out.”

As Hurricane Ian bore down on Florida, many residents who stayed put found themselves unable to leave if they tried. For hours they were forced to fight heavy winds and attempt to escape flooding inside long-loved homes that had become frightening, deadly traps. Within days, dozens of deaths would be attributed to the hurricane, many of them older residents who drowned.

Ms. Bishop had watched over her brothers since she was a child while her parents ran a leather and fur-cleaning service. As an adult, she had always lived near or with Russell and Todd, overseeing their medications and appointments at great cost to her personal life. “I’ve been married a couple times; nobody wanted to deal with all of the drama, so none of that lasted,” she said. “I just committed my life to them.”

They had not evacuated the area earlier in the week because the hurricane’s path seemed inconsistent and confusing. On Tuesday, Ms. Bishop planned to leave with her brothers for her daughter’s home 16 miles inland. But by then, there were so many warnings to stay put. Her parents were already at her late grandmother’s home in Wisconsin.

Now Ms. Bishop and her brothers were trapped. She texted her daughter at 12:34 p.m. “Water’s coming in.” Around her, she could hear the dining room hutch tipping and crashing, the china breaking, the refrigerator toppling over.

The only way to go was up.

Ms. Bishop’s parents had bought the tan home with the wintergreen metal roof around 1981, settling in the southwestern city that would come to be known for its pristine beaches and wealth. The home, located on a main inlet to the Gulf of Mexico, was not in great condition. Her parents, both in their 80s, had put their savings into their sons, even cashing in their life insurance policies.

But they had, about three decades ago, added a second floor.

Ms. Bishop guided Todd to the stairs, and he gripped the banister. She helped him pull himself slowly up to the top where he waited in a chair. Her Pomeranian, Destiny, also headed up.

But stairs were impossible for Russell, who could not walk, nor bend his stiff legs.

She had undergone knee replacement surgery in August because of a torn meniscus suffered while pushing Russell in his wheelchair up a hill. The stitches had just been taken out, and she had been warned to keep her scar dry. It was now submerged in brown and brackish water.

Ms. Bishop yanked on the medical gait belt around Russell’s waist, but he was nearly 170 pounds. She tried every position possible, switching from pushing to pulling, and managed to get him up a few carpeted steps.

But the water followed.

“Russ, try to get on your butt and put your hands up on the stairs, try to help me,” she pleaded. He didn’t understand.

Ms. Bishop called 911 and was told someone would come soon. But out the window she could already see patio furniture, boats and cars floating by. It would be a while before anyone could get to them. Her daughter, Heather Noel, had gotten her text and was trying to call, but reception was bad.

One of Ms. Noel’s neighbors owned a truck and offered to pick up her mother and uncles. He soon returned. A police officer had waved him off because it was unsafe.

Meanwhile, Ms. Bishop was frantic. She would inch Russell up one step, only to see the water rise with them. And then her brother would ask to rest. “I’m sorry, Darcy. I’m tired.”

At one point, he slipped back down a few steps, and they had to start over. Ms. Bishop called Russell’s physical therapist who managed to coax him to move a bit. But her phone battery was dwindling, and she had to hang up.

Her frustration was tempered by Russell’s innocence. He counted the pictures on the wall. “Look Darcy, 1, 2, 3, 4.”

Finally, over the course of an hour, they made it up eight steps to the first small landing, then three steps to the second, and then a handful of steps more.

But they stopped when the angle of the final landing required Russell’s body to twist. It simply would not. Ms. Bishop grabbed one of her father’s belts and tried to tie Russell to her, but it broke. His feet dangled in the water.

“I was just aggravated, I had to walk away,” Ms. Bishop said. “And then I came back and said, ‘OK Russ, come on,’ and he kept pointing to the pictures on the wall.”

They had climbed as far as they could. And still the water swelled.

She took a breath and walked to her parents’ room on the second floor so her brothers would not hear her. Then she called her mother to say goodbye.

Her mother tried to reassure her. The phone went dead.

Ms. Bishop returned to Russell on the stairs and placed sofa cushions and pillows around him to make him comfortable. She sat down beside him. And waited.

But after a while, she noticed the water start to recede. Hours passed as she stared, watching its slow retreat.

It was her granddaughter’s cousin, Hance Walters. He lived nearby and had heard she was in trouble.

Mr. Walters, 28, standing in waist-deep water, instructed two of his friends to go to his house and fetch canoes. Ms. Bishop waded to her back porch and snatched inner tubes and rafts to help bring her brothers outside. There, they were hoisted into the canoes.

Russell’s floating wheelchair was tossed in as well, although parts were missing. Ms. Bishop grabbed a laundry basket and loaded it with medication, birth certificates, health records. She put her dog on a raft and tied the house door shut with an electrical cord from a vacuum before pushing herself away. Outside, the wind kept knocking her over. She saw that water had nearly reached the top of the garage, the cars drowned inside. It seemed to take forever to get to a dry patch, to finally be driven to her anxious daughter.

When Ms. Bishop tells the story of her escape, she sobs at the part where she could not leave her brothers.

She is not sure about the future they face. The house will need to be demolished. The flood insurance company informed her that recouping her losses requires taking a photo of each ruined item and writing down its description. It is an unimaginable undertaking.

Ms. Bishop and her brothers are staying at her daughter’s home, although it is not equipped for a wheelchair. Todd and Russell have not said much about the ordeal they survived, only that they want to go back home. “I don’t want no more hurricane,” they both repeat.

Ms. Bishop is exhausted, her legs bruised. But she is mostly concerned about her family’s lack of savings. Long ago, she had been a manager at a grocery store until, she said, she was hit in the head with refrigerator panels at work and suffered nerve damage. She relies on disability payments and was also selling elaborate wreaths for extra money. All of her craft supplies were ruined in the storm.

On Friday, she fractured her hand while helping Russell into the bathroom and had to be taken to urgent care. The injury added even more weight to the question already on her mind.

“How am I going to take care of my brothers?”

AUSTIN, Texas--(BUSINESS WIRE)--As the first multifamily management company to be recognized in the Public Relations and Marketing Excellence Awards, … END_OF_DOCUMENT_TOKEN_TO_BE_REPLACED

There have been whispers of cooling housing and rental prices in the San Francisco Bay Area, but that hasn't yet translated into practical, noticeable … END_OF_DOCUMENT_TOKEN_TO_BE_REPLACED

Cars pass in Independence Square at twilight in Kyiv, Ukraine, Monday, Oct. 31, 2022. Rolling ... [+] blackouts are increasing across Ukraine as the … END_OF_DOCUMENT_TOKEN_TO_BE_REPLACED