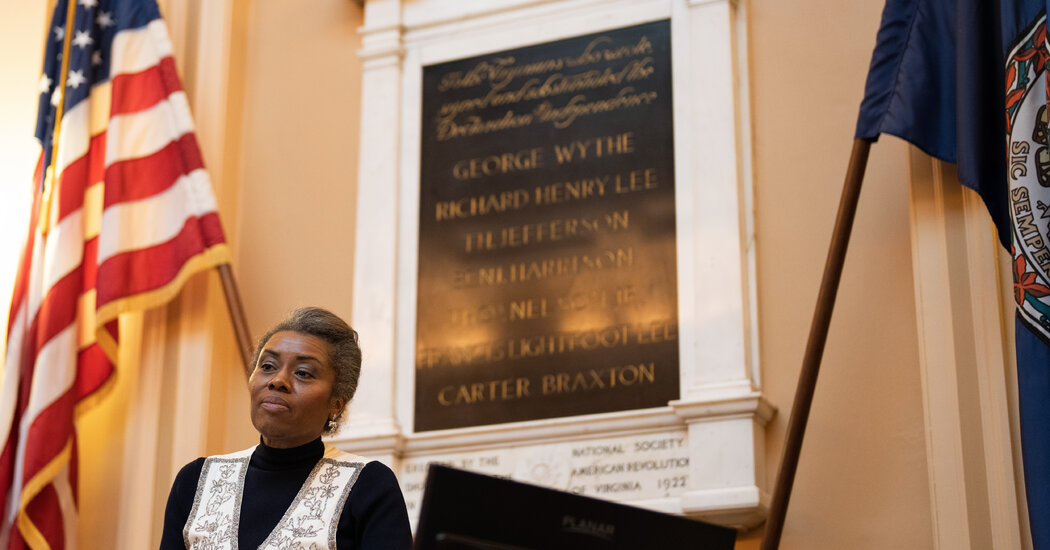 RICHMOND, Va. — On a December afternoon, Winsome Sears, Virginia’s lieutenant governor-elect, stood at the podium in the State Senate chamber where she will soon preside. It was empty but for a few clerks and staffers who were walking her through a practice session, making pretend motions and points of order. Ms. Sears followed along as the clerks explained arcane Senate protocols, though she occasionally raised matters that weren’t in the script.

“What if they’re making a ruckus?” Ms. Sears asked her tutors.

Then, a clerk said, pointing to the giant wooden gavel at Ms. Sears’s right hand, you bang that. Ms. Sears smiled.

That she was standing here at all was an improbability built upon unlikelihoods. Her campaign was a long shot, late in starting, skimpily funded and repeatedly overhauled. The political trajectory that preceded it was hardly more auspicious: She appeared on the scene 20 years ago, winning a legislative seat in an upset, but after one term and a quixotic bid for Congress, disappeared from electoral politics. She briefly surfaced in 2018, announcing a write-in protest against Virginia’s Republican nominee for U.S. Senate, but this earned her little beyond a few curious mentions in the press.

post-election crowing of conservative pundits, has been on the rare combination of her biography and politics: a Black woman, an immigrant and an emphatically conservative, Trump-boosting Republican.

“The message is important,” Ms. Sears, 57, said over a lunch of Jamaican oxtail with her transition team at a restaurant near the State Capitol. “But the messenger is equally important.”

This is the question that Ms. Sears embodies: whether she is a singular figure who won a surprise victory or the vanguard of a major political realignment, dissolving longtime realities of race and partisan identification. Democrats say there is little evidence for the latter, and that Ms. Sears won with typical Republican voters in an especially Republican year. But Ms. Sears insists that many Black and immigrant voters naturally side with Republicans on a variety of issues — and that some are starting to realize that.

“The only way to change things is to win elections,” she said. “And who better to help make that change but me? I look like the strategy.”

photo that went viral last spring, showing her holding an AR-15 while wearing a blazer-and-dress outfit suitable for a Chamber of Commerce luncheon, propelled her as much as anything to the Republican nomination.

Ms. Sears derides the left as too concerned with race but often explains her politics as rooted in Black history, stressing Marcus Garvey’s rhetoric on self-reliance as a Jamaican immigrant in Jim Crow America, emphasizing that Harriet Tubman carried a gun and referring to the infamous Tuskegee experiments in explaining her opposition to Covid-19 vaccine mandates. “If the Democrats are always going to talk about race, then let’s talk about it,” she said.

She rejects the notion that the problems Republicans have attracting Black voters might run deeper than mere neglect. She was angered when Republicans nominated Corey Stewart, who had a history of associating with Neo-Confederates, for the 2018 U.S. Senate race in Virginia. But she said this didn’t give her qualms about the party. She remains a champion of Mr. Trump, who openly endorsed Mr. Stewart; indeed, she was the national chairwoman of a group called “Black Americans to Re-elect the President.”

Jennifer McClellan, a Democratic state senator from Richmond, agreed that Democrats could not assume that Black people would show up for them at the polls, saying that Black voters, like any voters, choose candidates based on who they believe is going to help solve their problems. But, she continued, little that Ms. Sears has said suggests she would be that person in office.

The evidence that this year’s elections scrambled the fundamentals of race and partisanship is mixed at most. If anything, some Republicans worried that Ms. Sears’s hard-right politics might jeopardize the campaign strategy of appealing to more moderate voters. This risk was largely mitigated, said John Fredericks, a conservative radio host, by the fact that Ms. Sears’s general election campaign, which he called “a train wreck from start to finish,” never raised enough money to really broadcast her politics.

In any case, the attention was overwhelmingly directed to the top of the ticket.

“The election this year was all about the gubernatorial candidates,” said Stephen Farnsworth, a political scientist at the University of Mary Washington. There were few big surprises in the exit polls, several political experts said, and Ms. Sears won her race by a margin that would have been expected of just about any Republican this year.

“We don’t need to be tied or beholden to one particular party,” said Wes Bellamy, a Black political activist and a former vice mayor of Charlottesville. He will be watching Ms. Sears closely, he said.

Lieutenant governors in Virginia are fairly limited in their responsibilities, but they have a public profile — and they almost always run for governor. If Ms. Sears advocates for policies that improve the day-to-day lives of Black people and, more crucially, if she can persuade her Republican colleagues to go along, Mr. Bellamy said, “I think she’s gold.”

Many property purchasers in Alaska possess the same vision: Either hunker down away from the madding crowds in a refined log cabin or operate a … END_OF_DOCUMENT_TOKEN_TO_BE_REPLACED