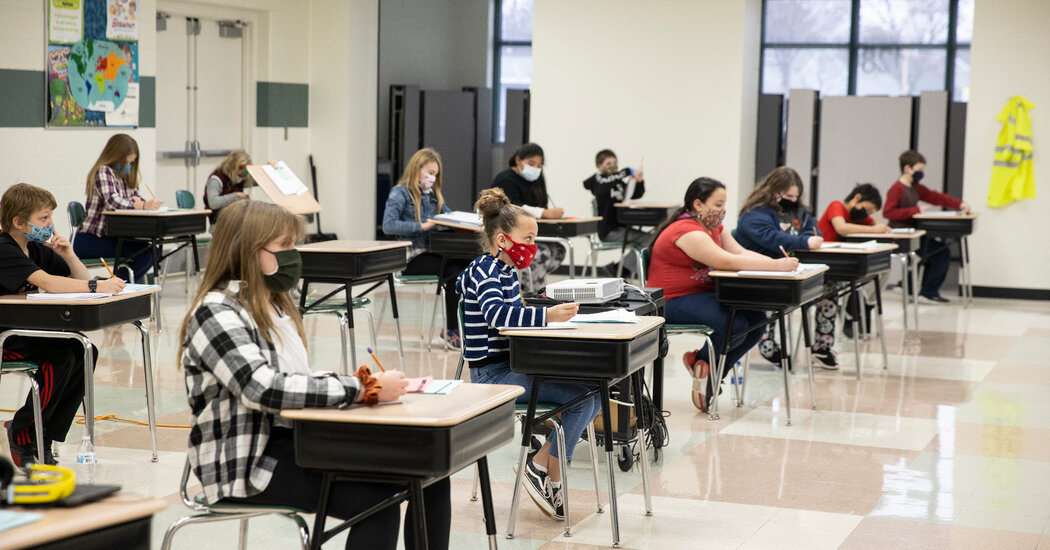 “I applaud the move to get elementary schools back in person regardless of community transmission,” she said. “And I also understand that there is some hesitancy about applying that to middle and high school students, although I’m not sure that it is fully in keeping with the evidence that we’ve seen.”

Even with the new guidance, many issues relating to how schools will handle their reopenings remain contentious and unresolved.

Although the C.D.C. is continuing to recommend six feet of distance when children are eating, the fact that students need to remove their masks at lunch time has raised concerns for educators and their unions. Seattle, for example, is planning to reopen elementary schools in the coming weeks on a half-day schedule that would avoid meal times, giving students less than three hours per day of in-person schooling, only four days per week.

Meanwhile, some districts have kept schools closed one day a week for what is sometimes described as a day of “deep cleaning,” a practice that experts have said has no benefit. In Anne Arundel County, the cleaning day is why the district is aiming to bring students back four days a week this spring, rather than five.

C.D.C. officials relied on the findings of several new studies about viral transmission in schools to rewrite their guidelines. There was the study written by Dr. Branch-Elliman, Dr. Perkins and colleagues, which looked at school districts in Massachusetts and found no significant difference in the number of infections in school districts that used three feet of distancing, when compared with those that required six feet.

The Utah study looked at 20 elementary schools and found a low rate of viral transmission associated with schools between Dec. 3 and Jan. 31, despite high infection rates in the community. Most students wore masks, but limited classroom space made it impossible to keep them six feet apart, the study said; they were spaced closer to three feet apart.

DALLAS — The rollback of abortion rights has been received by many American women with a sense of shock and fear, and warnings about an ominous … END_OF_DOCUMENT_TOKEN_TO_BE_REPLACED

The poshest place in California's Coachella Valley is The Madison Club. This exclusive gated community in La Quinta is where A-listers and tycoons … END_OF_DOCUMENT_TOKEN_TO_BE_REPLACED