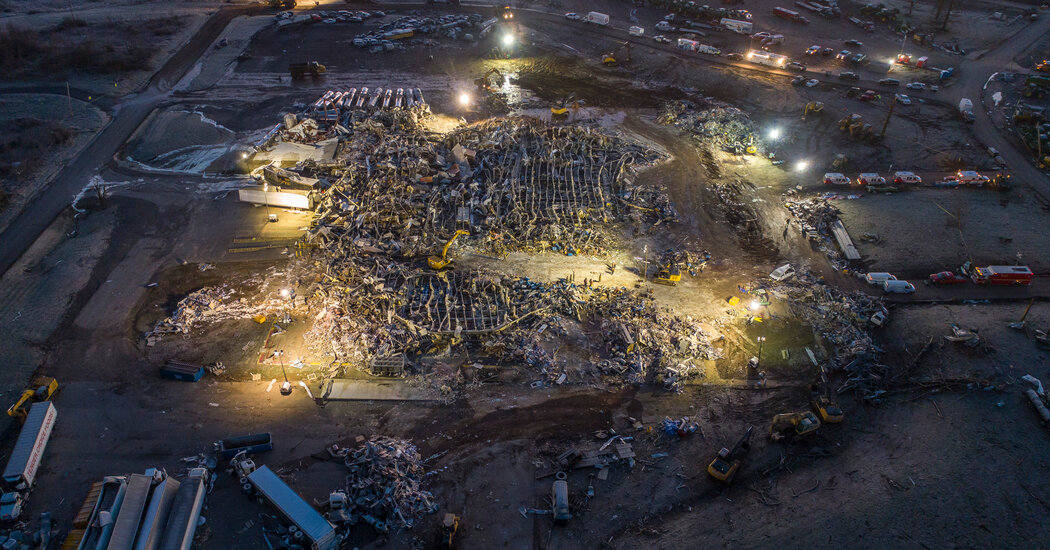 MAYFIELD, Ky. — Hispanic workers referred to the big, boxy factory on the west side of town as Las Velas, for the product it turned out: candles. Employees brought the calming fragrances — lavender, vanilla — home with them, imbued in their clothes. Some preferred it to the nearby local chicken plant or farms, where the work was backbreaking.

“I thanked God for the opportunity,” said Flor Almazan, a Guatemalan immigrant who was hired for $7.50 an hour three years ago to place wicks in little jars of wax.

But last Friday, a swarm of tornadoes that plowed across six states reduced the factory to rubble, trapping dozens of workers including Ms. Almazan, who was buried alive for hours, her cries for help joining a chorus of despair. Eight people died, and Mayfield Consumer Products, the company that operates the plant, is facing intense scrutiny in the storm’s aftermath.

Angry survivors have asked why supervisors did not cancel the Friday night shift, given the ample warnings that tornadoes were likely to spin up in the area. Some employees have claimed that supervisors threatened to fire workers if they left their shifts early as the tornadoes approached — an accusation the company denies. On Thursday, some of those workers filed a lawsuit accusing the company of “flagrant indifference” for refusing to let them go home early.

the jailer watching over them was killed.)

State and local officials have praised the low-tech domestic manufacturer for the opportunities it provided to scores of local residents. But those opportunities had limits.

Wages started at $8 per hour, close to minimum wage, and did not go much higher than that for many workers, a concession to the brutal realities of the global labor market.

For some in Mayfield, a candle factory job was the kind held on to until something better came along, or until life’s vicissitudes dictated other directions.

Nicole Byassee, 46, the manager of a convenience store, said she had done three stints at the candle factory over the years. She said it was a well-run place. She made friends there, and she liked how she could smell the fragrances from her house a mile away.

She quit her last job at the factory, as a quality inspector, in the midst of the Covid-19 pandemic, when she was caring for her ailing father-in-law at home. “I couldn’t afford to catch it myself,” she said.

Ms. Almazan had lately been working the night shift, which bumped her pay to $12.50 an hour, enough to provide for her two children. On Friday night she said her goodbyes to them as she prepared for work. The sky was darkening above her, and the rain was falling harder. She was not worried. “Just rain,” she told herself.

At about 5:30, a half-hour into her shift, sirens blared over the production line. She hustled to a safe area, packed elbow to elbow with roughly 100 fellow workers, she said in Spanish. They huddled there nervously for a few minutes until supervisors told them to return to their stations. Christmas was coming. There were big orders to fill. But more storms were coming, too.

Elijah Johnson, 20, showed up for work at 6 p.m. He did not understand why supervisors had not canceled the night shift.

As the warning pings of cellphones rang out, he and others asked to leave work. He said his supervisor told him that he had missed too much work already and would lose his job if he left on this night.

“I kept saying, ‘Even with the weather like this we can’t leave?’ and the supervisor kept saying, ‘No,’” Mr. Johnson said. “When more people asked if they could leave, they were told that if they left, there would be consequences. I was told that if I left I would be terminated.”

Bob Ferguson, a spokesman for Mayfield Consumer Products, called the accusation that workers would be fired if they left “totally untrue” and “ridiculous.”

He said that until about a year ago, employees who left their shift early would accumulate points, and could be fired if they racked up enough. But as Covid-19 surged, he said, the company eliminated the points system and allowed workers to start and stop their shifts at will without penalty, something he said employees regularly did.

Shortly after 9 p.m., the sirens went off again. Ms. Almazan turned to a worker next to her and asked if this might mean they would be leaving work early. The woman nodded yes.

Ms. Almazan called her 11-year-old daughter, Cristina Pastor, and told her, “Mija, I’m coming home.” The little girl, hearing the wind slam the walls of her home, asked her if she was OK. “We are OK,” she replied. “We are in a safe room.”

Then came a roar. The factory’s roof peeled off like a piece of paper. The walls collapsed, trapping the workers. Ms. Almazan twisted her face toward a gap in the bricks, trying to breathe. A woman near her who had been crying went quiet, and then went stiff.

“I thought I was going to die soon too,” she said. Her husband and son had been trying to call her. She could hear the phone ring but could not reach it through the rubble. Her family rushed to the site, joining others who had come to find their loved ones.

Six hours later, someone moved the pile above her and a fireman took her hand. The next morning she woke up at a hospital in Paducah. Her head felt like it was being pounded by a bag of hammers.

Days after her ordeal, Ms. Almazan said it was still painful to move her limbs. Sleep was hard to come by. Each time she closed her eyes, she said, she was back under the rubble, hearing those around her scream for help.

“What happened was very difficult to forget,” she said.

Still, Ms. Almazan said, she wished nothing more than to see Las Velas return to Mayfield and employ people like her once again. If the factory reopened, she said she would gladly return.

“I depended on that work,” she said, “and not having it is scary.”

You have to go back to the start of the coronavirus pandemic to find mortgage rates as high as they are this week.According to the latest data … END_OF_DOCUMENT_TOKEN_TO_BE_REPLACED