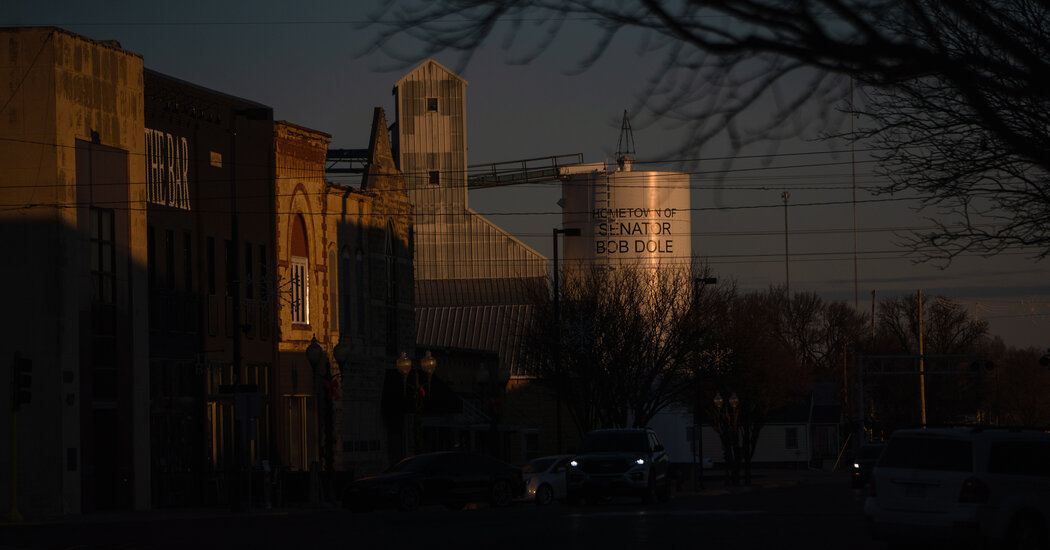 RUSSELL, Kan. — A quarter-century has passed since Bob Dole left the Senate and lost his bid for the presidency. But in his hometown on the Kansas Plains, a place Mr. Dole gave near-mythic status in his political origin story, he is still everywhere: On the side of the grain elevator. On a downtown mural. On street signs and plaques and, at the local historical society, in black-and-white photos where he is hunting jack rabbits and wearing a Russell High Broncos basketball jersey.

As Russell’s 4,400 residents mourned Mr. Dole, who died on Sunday at age 98, many also grieved for their hometown senator’s approach to governance, one in which compromises were celebrated and opponents were not enemies. They said a little more Bob, as people in Russell called him, might just help detoxify the national discourse.

pooled money in a cigar box to help cover his expenses when he returned from World War II with severe shoulder, arm and spine injuries.

announced his first of three campaigns for president.

Russell loved him back. Daron Woelk, who owns a jewelry store on the brick-paved Main Street, described a treasured photo of himself as a toddler with Mr. Dole, in which the senator signed his name and joked that young Daron looked like a good Republican. The message stuck. Mr. Woelk was elected to the county commission last year on the Republican ticket.

“Democrat wars” and was referred to by some as “Nixon’s hatchet man,” but he also made celebrated compromises with Democrats. He helped expand the food stamp program, rescue Social Security and pass the Americans With Disabilities Act, partnering with liberals whom he disagreed with on other issues. More recently, he endorsed Donald J. Trump for president, but met with President Biden, an old colleague in the Senate, after he took office.

Larry Nelson, Mr. Dole’s nephew, who lives in and maintains the senator’s childhood home on the north side of town, questioned whether his uncle’s philosophy would resonate in Washington today.

“Bob was not your run-of-the-mill politician ever; Bob was a statesman,” Mr. Nelson said. “He would not fit in this group of people on the Hill now.”

won on the Democratic ticket in 2018 amid a backlash to a sweeping package of tax cuts engineered by Republicans that left the state in a budget crisis. Russell was also the childhood home of Arlen Specter, who represented Pennsylvania in the Senate for decades, first as a Republican, then as a Democrat.

“I think they’re going to have to not be on such rigid ‘I’m a Democrat, I’m a Republican, and we will not do anything together,’” Aldean Banker, a Russell resident who once served on state Republican committees, said. She was an alternate delegate for Mr. Dole at a national convention but voted for Ms. Kelly in 2018. “I think we’re going to have to learn to give and take a little and go back to having a meeting of minds.”

Mr. Trump received 81 percent of the votes in Russell County, which includes the city and surrounding countryside. About 90 percent of Russell residents are white, and about 24 percent of people are 65 or older, compared with 16 percent statewide. The economy is driven by a broad range of industries: agriculture, oil, health care, manufacturing and retail, both along Interstate 70 and in the busy downtown, where a local radio station plays all day on outdoor speakers.

Almost everyone in Russell seems to have a Bob Dole story, or several. Some shared steak dinners with him at Meridy’s Restaurant and Lounge. Others recalled him stopping by the V.F.W. post, where Dole pineapple juice was served in support of his campaign. Others remembered that the senator would gamely stick out his left hand when they extended their right arm; Mr. Dole’s war injuries left him unable to shake right-handed.

posting on Twitter about Kosovo last week and keeping track of Kansas politics.

In a column Mr. Dole wrote shortly before his death that was published in The Washington Post this week, he reflected on his journey from west-central Kansas to some of the highest perches in American government. He also lamented political divisions and said, “Bipartisanship is the minimum we should expect from ourselves.”

“My home at birth was a three-room house,” Mr. Dole wrote. “I grew up during the Dust Bowl, when so many of us helplessly watched our livelihoods blow away with the wind. I have always felt humbled to live in a nation that would allow my unlikely story to unfold.”

announced his second run for the presidency in 1987, said that speech began his interest in politics. He now presides over the Appropriations Committee in the Kansas House of Representatives.

Mr. Waymaster, a Republican who lives just outside Russell and farms with his father, Lance, said Mr. Dole called a few months ago when he was getting ready to work on the wheat crop. They talked about next year’s election for governor, when Republicans hope to reclaim the seat.

Mr. Waymaster said Mr. Dole often pushed for more bipartisanship and more compromise. That art may not be completely dead. Last month, Mr. Waymaster joined other Republicans in the Legislature to pass a bill creating exemptions to employers’ Covid-19 vaccine mandates. Ms. Kelly disappointed some of her fellow Democrats by signing it into law.

AUSTIN, Texas--(BUSINESS WIRE)--As the first multifamily management company to be recognized in the Public Relations and Marketing Excellence Awards, … END_OF_DOCUMENT_TOKEN_TO_BE_REPLACED

There have been whispers of cooling housing and rental prices in the San Francisco Bay Area, but that hasn't yet translated into practical, noticeable … END_OF_DOCUMENT_TOKEN_TO_BE_REPLACED

Cars pass in Independence Square at twilight in Kyiv, Ukraine, Monday, Oct. 31, 2022. Rolling ... [+] blackouts are increasing across Ukraine as the … END_OF_DOCUMENT_TOKEN_TO_BE_REPLACED