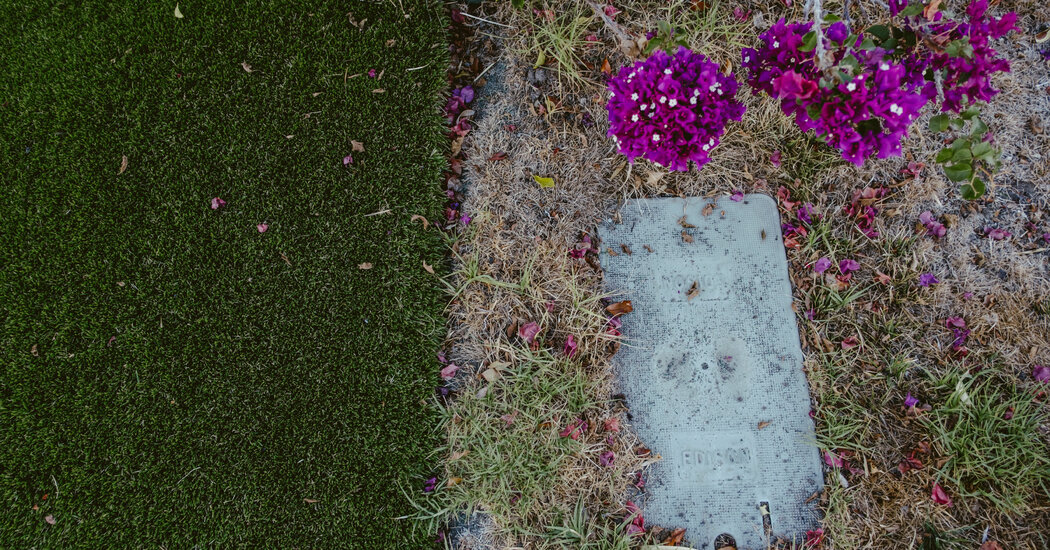 AGOURA HILLS, Calif. — Erin Brockovich made her name decades ago as an environmental activist who exposed corporate wrongdoing that polluted drinking water.

So she felt a bit defensive when a television reporter asked how her name landed on a list of water guzzlers during a dire California drought. At one point last year, she received a $1,700 bill for two months of water and fines.

Ms. Brockovich ultimately decided she had to get rid of her lawn, a central part of the backyard oasis she had built over more than two decades living in Agoura Hills, a suburb of large homes with immaculate yards about 40 miles northwest of downtown Los Angeles. She replaced 3,100 square feet of grass with high-tech artificial turf.

rebates that paid homeowners to swap out grass, according to the Metropolitan Water District of Southern California, which distributes water to utilities serving 19 million people. In May, the number jumped to 870. By June, it was almost 1,400.

decomposed granite and native plants, inspired by a family across the street.

“Having a lawn up here in the Valley is completely nonsensical,” said Ms. Jessen, 45, as she maneuvered her 5-month-old son, Scout, into a sliver of shade on a recent 100-degree afternoon.

modeled on a real one in the San Fernando Valley — and onto a perennially verdant backyard.)

Despite that portrayal, the region has a patchwork of communities with varying landscaping conventions. Many neighborhoods in Los Angeles have yards that would be considered tiny by people in, say, the Midwest, and dirt lots or concrete are hardly unusual.

In Hancock Park, a historic enclave in the center of Los Angeles, Bill Newby, 65, said that sloping lawns were essential to his community’s identity.

“We see people coming into this neighborhood all the time, jogging through,” he said. “Halloween here is delightful.”

While Mr. Newby said he was working to follow the city’s watering restrictions — two assigned days per week — he found them frustrating.

residents of California’s cities, where per capita water usage has steadily decreased, or farmers, who say they grow food for the nation.

Southern California’s rise was predicated on ready access to water. The Los Angeles Aqueduct, which opened in 1913, ushered millions of gallons from the Owens River Valley across more than 200 miles to what would rapidly become the nation’s second most populous city — an engineering triumph that defied nature.

Los Angeles’s growth over the following decades coincided with a booming middle class whose aspirations of suburban homesteading trace back to the English countryside. There, lawns were an early means of displaying conspicuous wealth among the landed gentry, said Christopher Sellers, a history professor at Stony Brook University who has written about lawns in the United States.

American horticulturalists developed heartier hybrids of grass designed to survive in warmer, drier climes, though they still needed regular watering. And the lawn made its way west to California, where it took hold as what Mr. Sellers described as “the cultural norm, the expectation.”

The vast Los Angeles region was built on the idea that everybody can own a plot of land with a lawn and driveway. Yet one need only glimpse at nearby nature preserves to see what plants would otherwise thrive here.

11 percent less water last month than they did in July 2021.

Around the region, landscapers who specialize in drought-tolerant plants and artificial turf say they are scrambling to keep up with demand. “I feel like an analogy is it’s Covid and we’re the only ones with the masks,” said Mitchell Katz, the owner of Camarillo-based Turf Exchange, which has replaced grass with artificial turf for nearly a decade.

Ms. Brockovich was among Mr. Katz’s customers, a full convert to artificial turf, which she said looks and feels nothing like older versions of fake grass, with no unsettling coloring.

While such turf eliminates the need for watering, it must be replaced roughly every 20 years, generating plastic waste. That environmental cost has disqualified it from the M.W.D. rebate program.

At the Theodore Payne Foundation nursery, families browsed the rows of narrow leaf milkweed and sage, herbal and earthy scents heavy in the hot air.

Lorna Estrada, 50, and her daughter, Sienna Kochakji, 13, had come from the Lake Balboa neighborhood of the San Fernando Valley to do some “window shopping,” as Ms. Estrada put it. A fifth-grade teacher, Ms. Estrada said she had taught her students about the drought and climate change. She said she wanted to undertake an outdoor project with Sienna.

So, after 15 years of weighing the idea, she said, “We’re finally letting our lawn go.”

Mr. Meyer said he hoped that someday soon, the San Fernando Valley region would look more like the natural landscapes through which so many Angelenos love to hike. He added the drought is catalyzing the transition.

“A lawn is basically a big, sterile green carpet that uses a lot of water to maintain,” he said. “We’re advocating for a future where our urban spaces blend seamlessly with their natural environments.”

Hometown Deli, Paulsboro, N.J.Mike Calia | CNBCThree men were charged with fraud and other crimes in a scheme involving a company that was worth $100 … END_OF_DOCUMENT_TOKEN_TO_BE_REPLACED

The childhood home of "The Morning Show" actor Nestor Carbonell recently hit the market in Greenwich, CT, for $4.4 million.Fans will appreciate that … END_OF_DOCUMENT_TOKEN_TO_BE_REPLACED