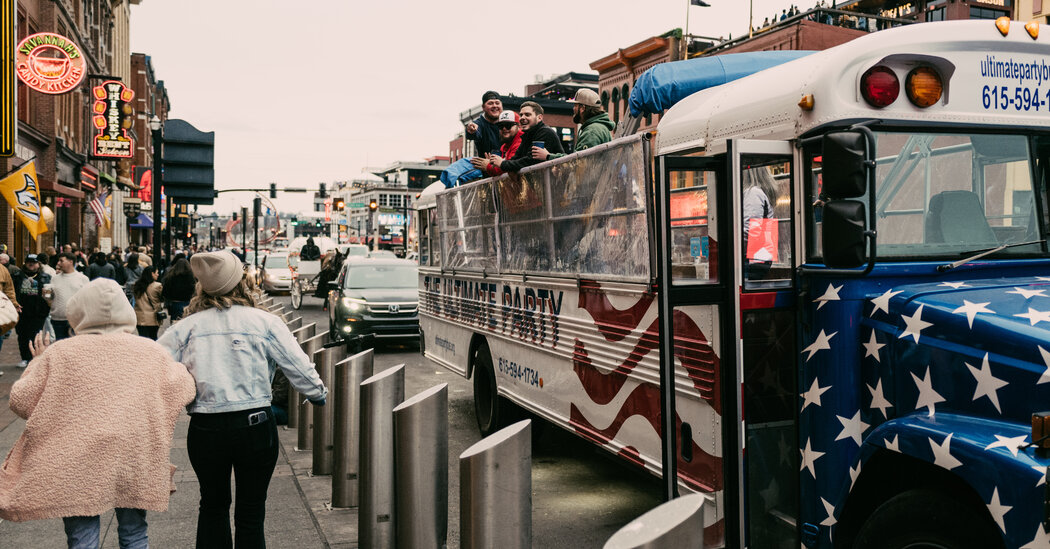 Not all Republicans are welcoming the MAGA-certified would-be candidates. On Tuesday, a State Senate committee approved legislation that would bar anyone who had not lived in Tennessee for three years from running for either the U.S. House or Senate. That would apparently leave out both Ms. Ortagus and Mr. Starbuck.

For once, Democrats and Republicans sort of agreed. The bill’s sponsor, State Senator Frank S. Niceley, said the bill would discourage wealthy “people flying over Tennessee and saying, ‘Look, there’s an open district.’” Mr. Yarbro, the Senate’s Democratic leader, said the conservative newcomers “couldn’t find a honky-tonk with a flashlight and a map of Broadway.”

Nor is it clear the city covets the Republican convention.

Mayor John Cooper — the congressman’s brother — was studiously noncommittal, saying in a statement that the area welcomed interest from either party in a convention if it “makes business sense for the city and aligns with Nashville’s values.”

Exactly how this plays out over the long haul remains unclear.

Republicans are wagering that their gerrymander will contain Nashville’s Democratic energies for at least the next decade. While the city added nearly 90,000 residents in the last census, its suburban collar counties added more than 220,000. Republicans’ hope is that those new residents will favor them over Democrats.

But that is not a sure bet.

“It might backfire on them,” Professor Syler said. “Those counties are safely Republican now, but they’re starting to trend Democratic,” a trend that picked up steam in the 2020 presidential election.

Others worry that domination by a hard-right legislature could turn off potential newcomers.

“I hope that the carving up of Nashville doesn’t cause people and firms to have second thoughts about coming here,” said Frank M. Garrison, a former investment-firm executive and Nashville civic leader.

AUSTIN, Texas--(BUSINESS WIRE)--As the first multifamily management company to be recognized in the Public Relations and Marketing Excellence Awards, … END_OF_DOCUMENT_TOKEN_TO_BE_REPLACED

There have been whispers of cooling housing and rental prices in the San Francisco Bay Area, but that hasn't yet translated into practical, noticeable … END_OF_DOCUMENT_TOKEN_TO_BE_REPLACED

Cars pass in Independence Square at twilight in Kyiv, Ukraine, Monday, Oct. 31, 2022. Rolling ... [+] blackouts are increasing across Ukraine as the … END_OF_DOCUMENT_TOKEN_TO_BE_REPLACED