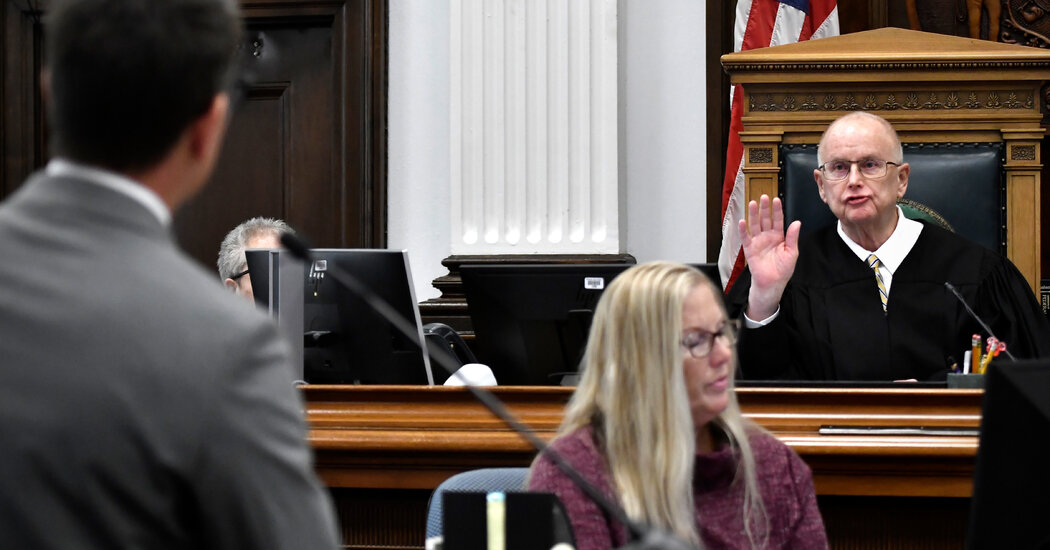 It is not every day that jurors in a criminal trial applaud a witness, but that was how the final day of testimony in the homicide trial of Kyle Rittenhouse began on Thursday. Noting that it was Veterans Day, the judge urged people in the courtroom to clap for military veterans moments after he discovered that the only veteran in the room appeared to be the next witness for the defense, an expert on use of force.

Judge Bruce Schroeder, who has presided over Mr. Rittenhouse’s trial and is the longest-serving state trial court judge in Wisconsin, has drawn attention in recent days as the judge’s courtroom style — stern, chatty and sometimes prone to shouting — has played out on a national stage.

Judge Schroeder, 75, enters court each day wearing a bulky Chicago Blackhawks coat or a Milwaukee Brewers jacket. He has sharply sparred with prosecutors in the case. He has launched into explanations of the fall of Rome and quoted Franklin D. Roosevelt.

The judge has said that he has overseen more homicide trials than any other judge in the state, but perhaps none has garnered more attention than the trial of Mr. Rittenhouse, who is facing charges including intentional homicide after fatally shooting two people and wounding a third amid unrest over a police shooting in Kenosha last year.

they should avoid the word “victim” to describe any of the three people Mr. Rittenhouse shot.

But Julius Kim, a defense lawyer and former prosecutor in Milwaukee who has defended clients in Judge Schroeder’s court, said he found the criticism a bit off the mark.

“I can tell you that I’ve seen rulings both in favor of the state and for the defense, and against the state and defense, in this case,” Mr. Kim said.

On Thursday, as testimony in the case neared an end, Judge Schroeder brought the jury into the courtroom and asked if there were any veterans on the jury or elsewhere. When he did not see anyone raise a hand, he noted that Mr. Rittenhouse’s next witness, John Black, was a veteran and then encouraged everyone in the courtroom to “give a round of applause to the people who have served our country.”

a 2006 headline in The Kenosha News. So many defense lawyers had filed to move their cases out of Judge Schroeder’s courtroom, the newspaper reported, that a judge from another county was brought in to hear their cases. In 1987, Judge Schroeder ordered a defense lawyer to spend a day in jail when he refused the judge’s orders to sit down.

Judge Schroeder worked as a prosecutor after graduating from Marquette University Law School in 1970. He was appointed to fill a judicial vacancy in 1983 by Gov. Tony Earl, a Democrat, and was then elected by voters in 1984 and every six years since. He has run unopposed in every election for at least the last 25 years.

In Mr. Rittenhouse’s trial, Judge Schroeder has often clashed with the prosecution. He berated the lead prosecutor, Thomas Binger, an assistant district attorney, several times on Wednesday, at one point shouting, “Don’t get brazen with me.”

At another point, Mr. Binger began to allude to a video of Mr. Rittenhouse from about two weeks before the shootings, in which Mr. Rittenhouse mused that he wished he had a gun to shoot at people he thought were shoplifting from a pharmacy. The judge had indicated in an earlier ruling that the video should not be mentioned before the jurors, but Mr. Binger said his “good faith explanation” was that the judge had not made a final ruling and that testimony earlier in the day had opened the door for it to be mentioned.

On Thursday, when Mr. Binger sought to ask a video streamer and commentator who had recorded portions of the Kenosha demonstrations whether the website he worked for had a political bias, Judge Schroeder stopped the witness from answering.

“This is not a political trial,” the judge said.

A sign stands outside an upscale home for sale in the Lake Pointe Subdivision of Austin, Texas.Ed Lallo | Bloomberg | Getty ImagesConsumer confidence … END_OF_DOCUMENT_TOKEN_TO_BE_REPLACED

A famous thatch-roof house designed by Earl Young captivated the web and racked up tens of thousands of clicks. Resembling a mushroom, the unusual … END_OF_DOCUMENT_TOKEN_TO_BE_REPLACED