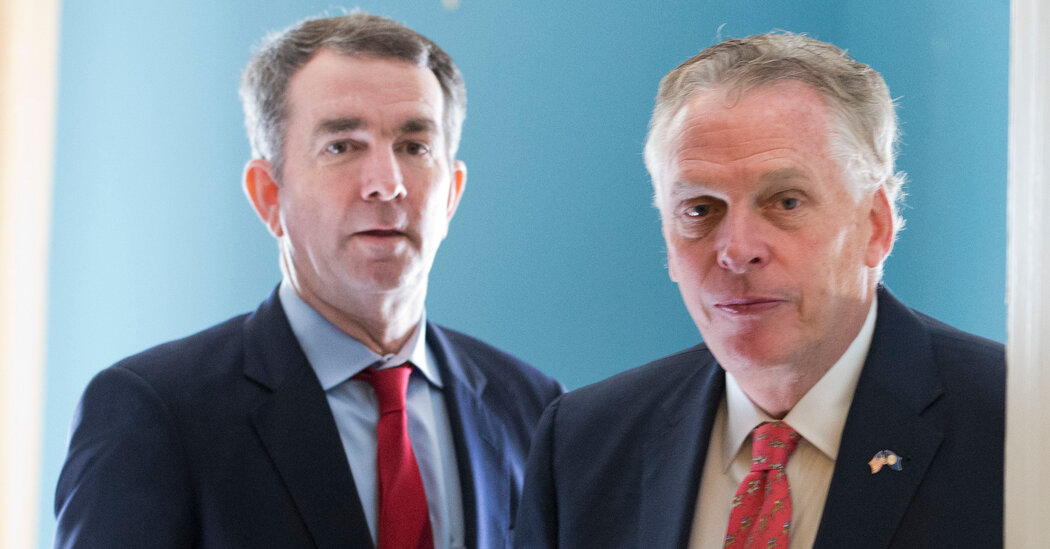 Two years ago, when a racist blackface picture emerged from the 1980s that appeared to include Gov. Ralph Northam of Virginia, the blowback was swift and severe. There were mounting calls for his resignation.

But in the end, polls showed that most voters said he shouldn’t step down — and some of his most unwavering support came from Virginia’s Black voters. He weathered the scandal, and he’s still on the job.

There are now exactly two months until the Democratic primary election that will most likely determine Northam’s successor, as the state has become decidedly blue (the Democratic candidate has won all 13 statewide elections there since 2012). And once again, Virginia is shaping up to be a case study in the complexities around the politics of race and power.

Northam, who continues to enjoy widespread approval, particularly from Black voters, on Thursday endorsed Terry McAuliffe, a former Virginia governor and one of the two white candidates in a five-person Democratic field. McAuliffe directly preceded Northam in the governor’s mansion and now wants to succeed him, too.

crooked road of the Virginia campaign trail, and Joe Biden last year in the presidential race, McAuliffe has been deliberate about outflanking his less-established Black opponents. He has emphasized his ties to the Black elite in Virginia politics, and from the day he announced his candidacy he has ensconced himself in endorsements from Black officials.

McAuliffe faced attacks from a unified team of rivals, and things boiled over when Fairfax, the state’s lieutenant governor, criticized him for calling in 2019 for Fairfax’s resignation. As Northam was engulfed in his own scandal, two women publicly accused Fairfax of sexual assault. Fairfax denied the allegations and, like the governor, managed to remain in office, mostly by just moving on.

At the debate Fairfax went all the way after McAuliffe, reminding voters of the long and disgraceful history in America of false accusations and violence by white people toward Black men.

“He treated me like George Floyd, he treated me like Emmett Till — no due process, immediately assumed my guilt,” Fairfax said. “I have a son and I have a daughter, and I don’t want my daughter to be assaulted; I don’t want my son to be falsely accused. And this is the real world that we live in. And so we need to speak truth to power, and we need to be very clear about how that impacts people’s lives.”

But even before that, Fairfax had partly undercut his own argument by pointing out that it wasn’t just McAuliffe: All of his Democratic rivals onstage had called for him to resign in 2019.

Besides, as the Times reporter Astead Herndon observed on Twitter, “‘what happened to me is like what happened to George Floyd and Emmett Till’ is not a thing a living person can say.”

McClellan, a state senator, picked up on the theme of racial justice but went after McAuliffe on substantive policy grounds. She said he had underfunded the state’s parole system as governor, and called him a latecomer to the movement for justice reform.

McAuliffe pushed back by pointing to his order restoring voting rights to more than 200,000 felons in 2016, and said he supported equipping all police officers in the state with body cameras — two major goals of civil rights advocates.

AUSTIN, Texas--(BUSINESS WIRE)--As the first multifamily management company to be recognized in the Public Relations and Marketing Excellence Awards, … END_OF_DOCUMENT_TOKEN_TO_BE_REPLACED

There have been whispers of cooling housing and rental prices in the San Francisco Bay Area, but that hasn't yet translated into practical, noticeable … END_OF_DOCUMENT_TOKEN_TO_BE_REPLACED

Cars pass in Independence Square at twilight in Kyiv, Ukraine, Monday, Oct. 31, 2022. Rolling ... [+] blackouts are increasing across Ukraine as the … END_OF_DOCUMENT_TOKEN_TO_BE_REPLACED