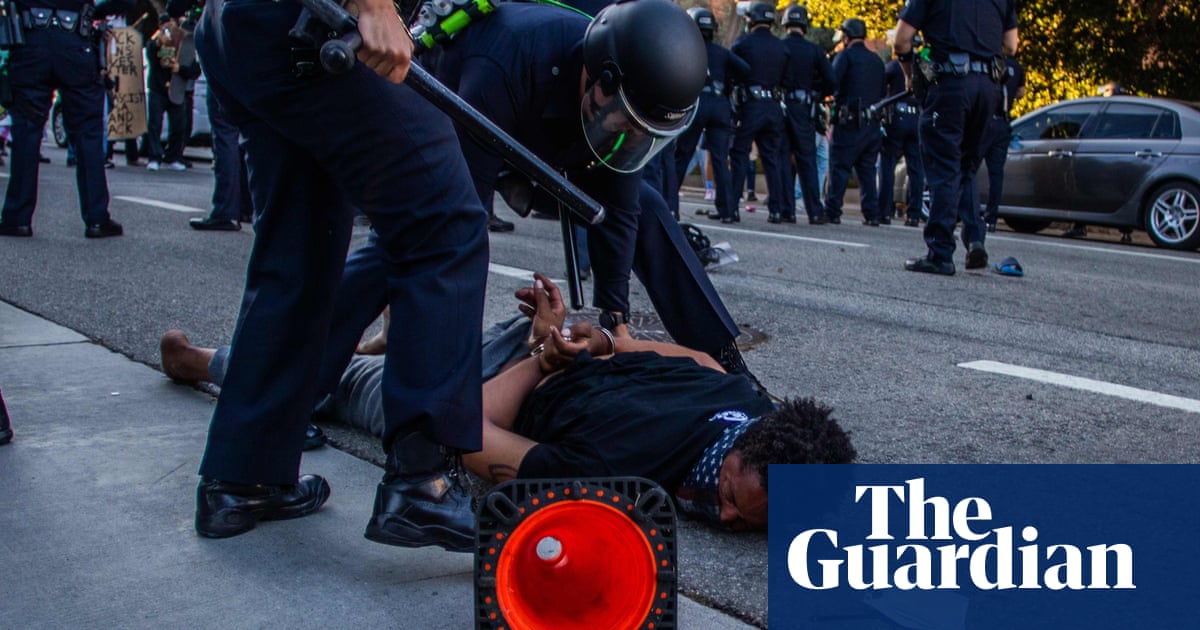 The Los Angeles police department has been criticised over its handling of the widespread protests that broke out over the summer after the death of George Floyd, with an independent review finding that poor planning led to chaos and mass arrests.

The review, commissioned by the city council following nationwide demonstrations last year, was released on Thursday as the trial opens in Minneapolis for Derek Chauvin, the former police officer charged with killing Floyd on 25 May 2020.

“On May 27 and 28, the protests in downtown Los Angeles were marred by an escalating level of violence and criminality. Initially, the (Los Angeles police) department treated these as isolated incidents, rather than as a manifestation of a larger expression of outrage that was spreading across the United States,” the report said.

The LAPD did not immediately respond to the report.

The review, headed by the criminal defense attorney Gerald Chaleff, found that LAPD commanders failed to establish a clear command structure for directing its response to the outbreak of violence, leading to a “chaos of command” that left officers unsure of who was in charge as events unfolded.

“It appears the department believed that if protests arising out of George Floyd’s death occurred in Los Angeles that they all would be peaceful,” the report’s authors said. “In interviews with the review team, interviewees said they were surprised at the violence that occurred in the afternoon and evening hours at some protests.”

Other mistakes cited in the analysis included poor training of officers in use of non-lethal weapons, and failing to anticipate that the protests could spread beyond the city’s downtown and lack of field jails.

“Thousands of people were arrested throughout the protests without a clearly articulated plan for detentions, transportation and processing,” the report said. “Those arrested were detained at the scene of the arrests for hours, handcuffed on the pavement, detained in buses, and taken to remote locations, without water or the use of bathroom facilities.”

The report also noted that the protests occurred during the pandemic, meaning that “officers and those arrested were in close proximity, not socially distancing, many without masks and thus at risk of being exposed to the Covid-19 virus.”

Between 29 May and 2 June, the LAPD arrested more than 4,000 people, the report stated.

A number of lawsuits have been filed against the city of Los Angeles and the LAPD in connection with these arrests and injuries incurred during these protests. “There are reports that people were struck in the face and head, causing significant injuries, some of which required surgery,” the report stated. “Not all people struck with less lethal munitions during the protests were engaging in criminal behavior. This appears to be in part due to the complex and rapid movement of the crowds and at times a lack of adequate training.”

In all, the 101-page report had 67 findings and listed 10 recommendations that included a periodic audit that the LAPD is in compliance with all lawsuit settlements, an extensive study of less-lethal munitions, an update on use-of-force directives in large crowds and more instruction regarding the use of less-lethal munitions on crowds.

The report noted that during the protests, 106 officers suffered injuries from “dangerous objects being thrown at them, lasers used to injure their eyes, and other methods used to injure the officers and incite the crowd of protesters”. In addition, 141 LAPD patrol cars were severely damaged and six were destroyed by fire and other forms of vandalism. Yet “despite the provocations, the police must be able to effectively address those who are committing criminal acts and causing disruption,” the report states.

“One of the fundamental duties of policing is to protect the first amendment right to free speech, assembly and the right to petition the government for redress of grievances,” the report reads. ”

On this massive Michigan property, an enormous garage and a huge mansion battle it out in a clash of oversize titans.Located in Holland, MI, and … END_OF_DOCUMENT_TOKEN_TO_BE_REPLACED