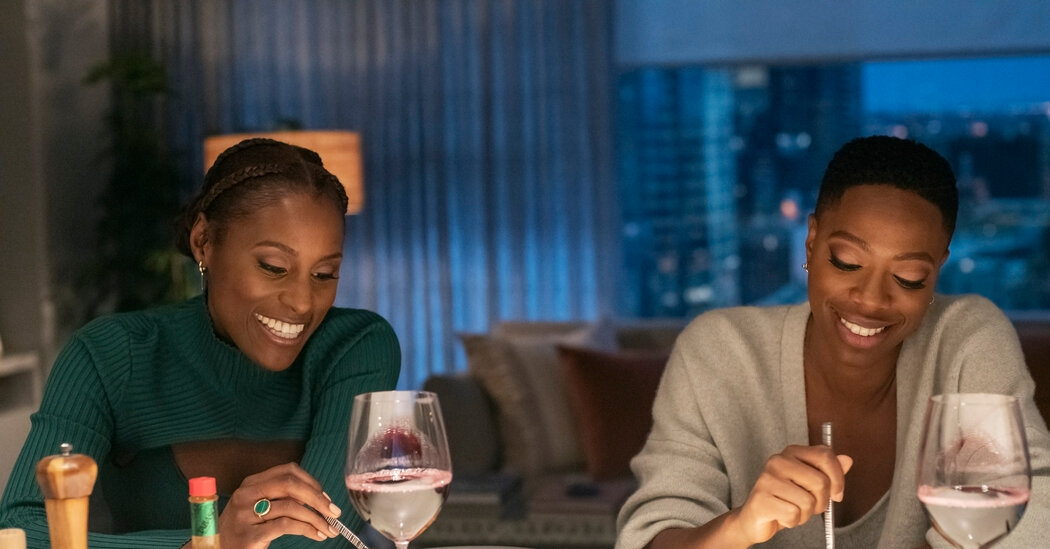 It is a lesson for Issa, who is clearly trying to walk the thin line between the corporate world and her natural activism. At the fashion show, Crenshawn calls her a sellout and it enrages her, because she has been working so hard on his behalf. It isn’t clear if she understands that what she considers support may seem different to someone else.

One person who has gotten better at supporting Issa is Molly. She stands with her at the fashion show taking in the cringey performance with her friend. The girls have been spending a lot of time together in the year that has passed. So much so, that Molly’s mother tries to set her up with a member of her church who turns trap songs into gospel.

But Molly has a plan. After hesitating to join the dating app, The League, throughout most of the show to this point, she finally to begins to fill out her profile. But she is stumped by the “Dating me is like …” question — she has flashbacks to many times when past paramours have told her she was acting poorly. It was a clever use of past snippets from the show — it’s as if Molly has internalized everything we’ve seen ex-partners tell her. She isn’t able to complete the profile.

Issa also thinks she is ready to venture out into the dating world. After the fashion show, she invites Nathan over for drinks and support. Tired, she begins to doze off. Nathan prepares to leave and she asks him to spend the night. In bed, when Nathan moves in and starts to kiss her, Issa moves away and starts to cry.

He sticks around long enough for Issa to calm down and fall asleep, and then he leaves. The sound of the door shutting wakes Issa, who is left in bed alone.

At the beginning of the episode, it feels like the girls have healed — they have been spending time on their friendship and on their professional endeavors. But by the end we see a consequence of those choices: They have been distracted by one another.

Molly and Issa have yet to fully process their past heartbreaks because they have been too busy hanging out and focusing on their careers. But those buried feelings don’t stay buried — all it takes is a romantic encounter or even just filling out a dating app profile for them to re-emerge.

The girls need time to rehab the damage from mistakes of the past. They’ve already forgiven each other now they must extend that courtesy to themselves.

Whether you optimistically hope that mortgage rates will decline or are resigned that rates will stay elevated above the historic lows of 2021, you … END_OF_DOCUMENT_TOKEN_TO_BE_REPLACED