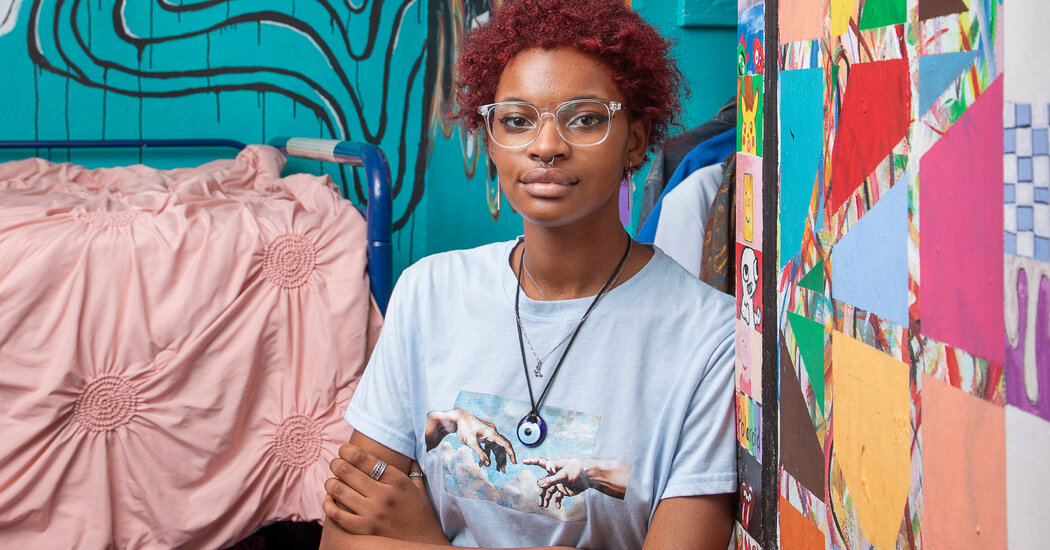 After months of remote learning, a year of in-person-but-not-quite-stable hybrid school and a fall semester that was just beginning to feel kind of normal, Kyla Chester-Hopkins, a high school junior in Milwaukee, learned that she had Covid-19.

Kyla, 16, was deeply anxious about spreading it to her family members. She worried that she had infected her best friend. So in early January, she stopped going to school and returned to learning online — stuck, once again, in the bedroom where she had already spent so much of 2020.

Back then, she was home with her father and four siblings, all but one of whom — her baby brother — relied on the same Wi-Fi connection to work and learn. Missing art class most of all, she pulled out her acrylic paints to make murals that sprawled across her bedroom walls and ceiling. She returned to school in the fall of 2020, but it was hybrid at the time, and most of her classmates were not there.

Her junior year has been better. Kyla recovered from her bout of Covid this month and is now back in class. But she feels that the instability of her freshman and sophomore years is not over yet, and she is always cautious.

switched schools or dropped out altogether.

And while most are back in class today, a sense of profound isolation persists. There are feelings of loneliness and angst. Many students feel that an entire system has failed them, leaving them to take on additional responsibilities far beyond what is typically asked of young people.

day-by-day basis as they struggled with staff shortages and the rising number of cases.

Graham Bevel, 8, a third grader there, was one of the many students who had to pause in-person learning and return, temporarily, to virtual classes in recent weeks. He and his 5-year-old sister went back to the old routine: doing schoolwork together as their parents watched.

And though Graham has his model trains and a “Harry Potter” book to keep him busy at home, he has been much happier going to class and seeing his friends again. “I missed them,” he said.

high numbers of Latino and Black students and where most students qualify for free or reduced-price lunch — said that remote learning left her feeling disconnected during her sophomore year. But she also worried that in-person classes would expose her teachers and classmates to the virus.

“It’s kind of like a lose-lose situation,” Elizabeth, 16, said. “It’s like, which one are you willing to sacrifice?”

After she returned to class last fall, she saw things that alarmed her: Students were riding to school on crowded buses, teachers were not supplied with enough masks and the school’s outdoor spaces were not used enough. This month, Elizabeth became one of more than 1,000 students in her district who signed a petition calling for a student walkout unless in-person safety measures were improved or the schools went back to remote learning.

Oakland students were not alone: This month, walkouts in favor of stricter safety measures were held in cities and towns across the United States, including in Texas, Minnesota and Maryland.

“A lot of students are saying they would rather be at home because they don’t want to risk their health or their family members’ health,” Elizabeth said, adding that the schools could do a better job supporting students’ mental health during periods of remote learning.

The Oakland students who signed the petition came to a tentative agreement with the district, but their worries are far from over. “It seems that many people are stressed and behind on their assignments,” Elizabeth said, adding that Covid safety was still a major concern.

For a vast majority who are back in school across the United States, many are still playing academic catch-up as they juggle safety concerns, sporadic quarantines and staff shortages.

They know that the next variant could upend everything once again. And while many hope for lasting stability, the weight of uncertainty is heavy.

“We’re trying to get back into the swing of things, and not necessarily be stuck in this pandemic loop,” Kyla said. “Because it’s been two years now, and we don’t know how long it’s going to last, and we don’t want it to last forever.”

AUSTIN, Texas--(BUSINESS WIRE)--As the first multifamily management company to be recognized in the Public Relations and Marketing Excellence Awards, … END_OF_DOCUMENT_TOKEN_TO_BE_REPLACED

There have been whispers of cooling housing and rental prices in the San Francisco Bay Area, but that hasn't yet translated into practical, noticeable … END_OF_DOCUMENT_TOKEN_TO_BE_REPLACED

Cars pass in Independence Square at twilight in Kyiv, Ukraine, Monday, Oct. 31, 2022. Rolling ... [+] blackouts are increasing across Ukraine as the … END_OF_DOCUMENT_TOKEN_TO_BE_REPLACED