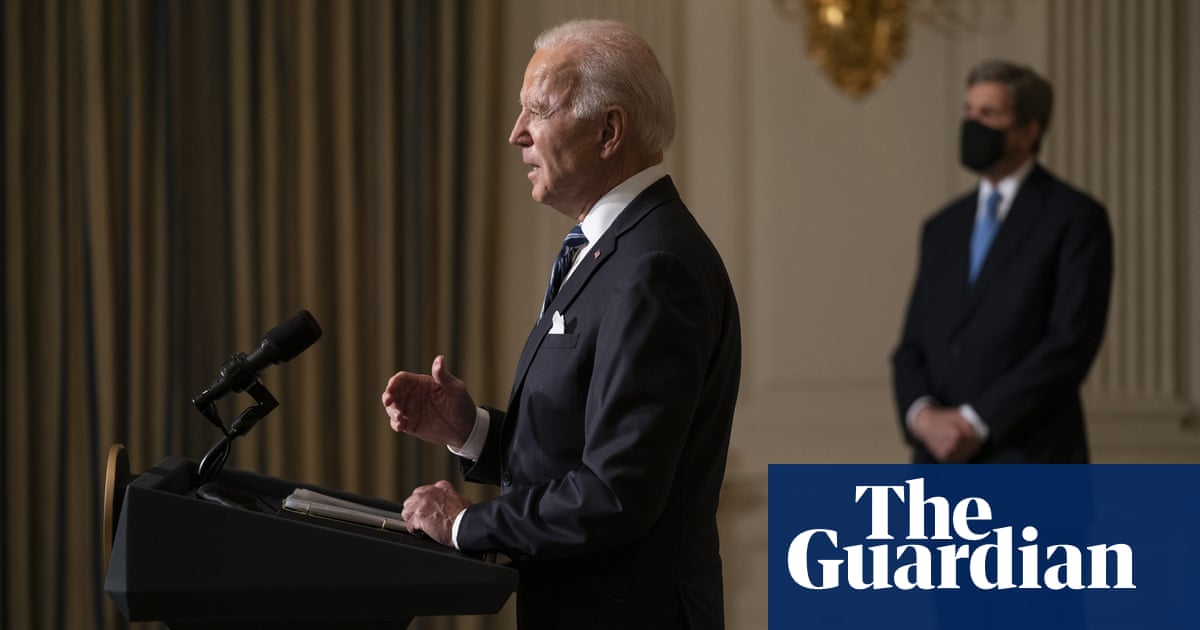 Joe Biden has invited 40 world leaders to a virtual summit on the climate crisis, the White House said in a statement on Friday.

Heads of state, including Xi Jinping of China and Russia’s Vladimir Putin, have been asked to attend the two-day meeting meant to mark Washington’s return to the front lines of the fight against human-caused climate change, after Donald Trump disengaged from the process.

“They know they’re invited,” Biden said of Xi and Putin. “But I haven’t spoken to either one of them yet.”

The start of the summit on 22 April coincides with Earth Day, and it will come ahead of a major UN meeting on the crisis, scheduled for November in Glasgow, Scotland.

Biden’s event is being staged entirely online due to the coronavirus pandemic.

The president kept his campaign pledge to rejoin the Paris climate agreement on his first day in the White House, after Trump pulled out of the deal.

The return of the world’s largest economy and second-largest emitter of carbon dioxide became effective on 19 February and means almost all countries are now parties to the agreement signed in 2015.

By the time of the summit, the US will have announced “an ambitious 2030 emissions target”, according to a White House statement, and it will encourage others to boost their own goals under the Paris agreement.

“The summit will also highlight examples of how enhanced climate ambition will create good-paying jobs, advance innovative technologies, and help vulnerable countries adapt to climate impacts,” the White House said in a statement.

The US has invited the leaders of the Major Economies Forum on Energy and Climate, which includes the 17 countries responsible for about 80% of global emissions and GDP, as well as heads of countries that are especially vulnerable to climate impacts or are demonstrating strong climate leadership.

The US president has placed global heating at the heart of his agenda and has already made waves domestically by pledging to make the energy sector emissions-neutral by 2035, followed by the economy as a whole by 2050.

He has also placed a hold on new oil and gas drilling on federal lands and offshore and is expected to soon seek a $2tn infrastructure package from Congress that would serve as the engine of future economic growth.

Biden dispatched his climate envoy, the former secretary of state John Kerry, to prepare the ground for the summit in meetings with European leaders earlier this month.

The meeting comes as the world is lagging badly in its efforts to limit end-of-century warming to 1.5C (2.7F), which scientists say is necessary to avoid triggering climate tipping points that would leave much of the planet inhospitable.

In an assessment of pledges made in recent months by around 75 countries and the European Union, UN Climate Change said that only about 30% of global emissions were covered in the commitments.

DONETSK REGION, Ukraine — Between the cracks of mortar fire and the metallic bangs of Russian self-detonating mines, Yurii, a Ukrainian Army medic, … END_OF_DOCUMENT_TOKEN_TO_BE_REPLACED

SAN FRANCISCO — Cleve Jones has lived in the Castro neighborhood for nearly 50 years, almost from the day he graduated from high school in Phoenix and … END_OF_DOCUMENT_TOKEN_TO_BE_REPLACED