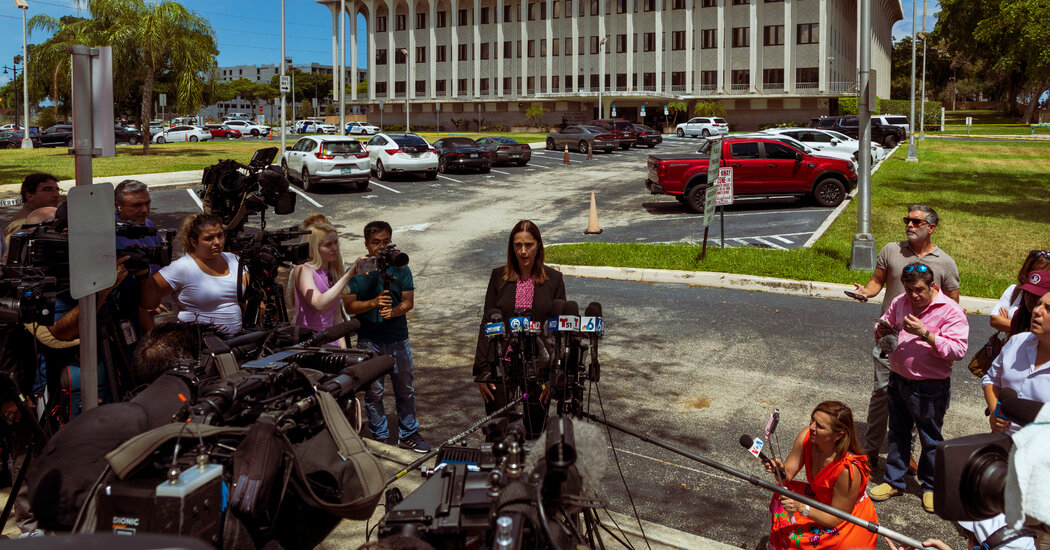 WEST PALM BEACH, Fla. — A federal judge ordered the government on Thursday to propose redactions to the highly sensitive affidavit that was used to justify a search warrant executed by the F.B.I. last week at former President Donald J. Trump’s private home and club, saying he was inclined to unseal parts of it.

Ruling from the bench, the judge, Bruce E. Reinhart, said it was “very important” that the public have as “much information” as it can about the historic search at Mar-a-Lago, Mr. Trump’s Florida residence. He noted later in a written order that the government “had not met its burden of showing that the entire affidavit should remain sealed.”

Judge Reinhart went on to say that he was leaning toward releasing portions of the document, adding that “whether those portions would be meaningful for the public or the media” was not for him to decide. He also acknowledged that the redaction process could often be extensive and sometimes turned documents into “meaningless gibberish.”

the request of the Justice Department, Judge Reinhart has already unsealed the warrant itself and two attachments to it. Those documents revealed, among other things, that prosecutors have been looking into whether Mr. Trump violated the Espionage Act, mishandled government records and obstructed a federal investigation by removing boxes of material from the White House at the end of his tenure.

More Coverage of the F.B.I. Search of Trump’s Home

Outside the courthouse in downtown West Palm Beach, news media vans and cameras lined the street, prompting a passer-by to remark that someone famous must be inside. More than three dozen reporters filed into the courtroom, wearing masks at the court’s request. A few curious members of the public also attended.

A top Justice Department lawyer began the arguments in front of Judge Reinhart by admitting that the search of Mar-a-Lago had attracted “heightened public interest,” but he still opposed the request to unseal the affidavit. It was a “very detailed and reasonably lengthy” document that would provide a guide to the department’s continuing inquiry into Mr. Trump, he said.

The lawyer, Jay Bratt, the chief of the Justice Department’s counterintelligence and export control section, which has led the investigation from the outset, noted that if the affidavit were publicly available, it could reveal the government’s next investigative steps and jeopardize the safety of its witnesses at a moment when the search of Mar-a-Lago had resulted in multiple threats against federal agents and others.

court papers filed on Monday, prosecutors said much the same, strongly objecting to the affidavit being made public and arguing that it offered a “road map” to their inquiry. In their papers, prosecutors also said that the release of the affidavit could harm “other high-profile investigations,” but did not specify which inquiries they were referring to.

Under questioning by Judge Reinhart, Mr. Bratt said that the department did not want to release even a redacted version of the affidavit, arguing that it could set a poor precedent for future cases.

“It is not a practice that we endorse and certainly would object to it very strongly,” he said.

Speaking for the news media coalition, a lawyer, Charles D. Tobin, said this was a “case of historic importance” and argued there was great public interest in understanding the underlying justification for the search.

“The raid on Mar-a-Lago by the F.B.I. is already one of the most significant law enforcement events in the nation’s history,” Mr. Tobin said, asking Judge Reinhart to provide “transparency” into the process.

“You are standing in for the public, your honor,” Mr. Tobin said at one point. “You are the gatekeeper.”

In court papers filed on Wednesday, the news organization group quoted Attorney General Merrick B. Garland who wrote, while he was a judge, about the right of public access to judicial records being “a fundamental element of the rule of law, important to maintaining the integrity and legitimacy of an independent judicial branch.”

she told reporters. Ms. Bobb confirmed that Mr. Trump’s legal team did not intend to get involved in the arguments about the warrant affidavit.

The search of Mar-a-Lago, on Aug. 8., ignited a firestorm of condemnation from right-wing figures in the news media and congressional Republicans, resulting in rallying cries to defund and destroy the F.B.I. and even warlike calls for violence. Three days after agents descended on Mar-a-Lago, an armed man apparently enraged by the search tried to breach the F.B.I.’s Cincinnati field office and was subsequently shot to death after trading gunfire with the local police during a standoff.

Even Judge Reinhart himself had been dragged into the furor surrounding the search.

In the days after Judge Reinhart signed the warrant, several threats — some of them antisemitic — were issued against him and his family on pro-Trump message boards with one person writing, “I see a rope around his neck.”

Soon after Herschel Walker, the former football star, announced he would run for U.S. Senate in Georgia as a Republican, his son Christian appeared … END_OF_DOCUMENT_TOKEN_TO_BE_REPLACED

SpaceX launched four people to the International Space Station from Florida on Wednesday, as Elon Musk's company keeps up a steady pace of crewed … END_OF_DOCUMENT_TOKEN_TO_BE_REPLACED