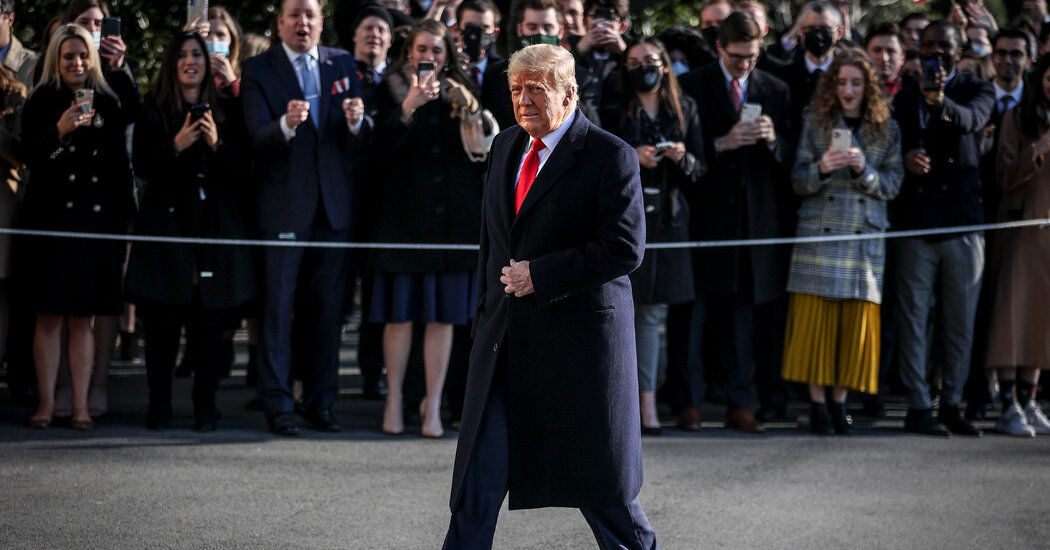 WASHINGTON — A federal judge on Tuesday night rejected a bid by former President Donald J. Trump to keep secret papers about his actions and conversations leading up to and during the Jan. 6 attack on the Capitol by his supporters.

In a 39-page ruling, Judge Tanya S. Chutkan of the U.S. District Court for the District of Columbia held that Congress’s constitutional oversight powers to obtain the information prevailed over Mr. Trump’s residual secrecy powers — especially because the incumbent, President Biden, agreed that lawmakers investigating the Jan. 6 riot should see the files.

Mr. Trump “does not acknowledge the deference owed to the incumbent president’s judgment. His position that he may override the express will of the executive branch appears to be premised on the notion that his executive power ‘exists in perpetuity,’” Judge Chutkan wrote. “But presidents are not kings, and plaintiff is not president.”

raises novel issues about the scope and limits of a former president’s executive privilege authority, and it is likely that it will ultimately be resolved by the Supreme Court.

In a posting on Twitter, Taylor Budowich, a spokesman for Mr. Trump, said the case was destined to be appealed. He said Mr. Trump was committed to defending the right of past presidents — as well as present and future ones — to assert executive privilege and “will be seeing this process through.”

But in a statement after the ruling, Representative Bennie Thompson, the Mississippi Democrat who is chairman of the committee, called the lawsuit “little more than an attempt to delay and obstruct our investigation.”

“Along our country’s history, the executive branch has provided Congress with testimony and information when it has been in the public interest,” he said. “This evening’s ruling is consistent with that tradition. And in my view, there couldn’t be a more compelling public interest than getting answers about an attack on our democracy.”

demanded that the National Archives and Records Administration turn over detailed records about Mr. Trump’s every movement and meeting on the day of the assault, when Mr. Trump led a “Stop the Steal” rally and his supporters then sacked the Capitol in an attempt to block Congress from certifying Mr. Biden’s Electoral College victory.

Mr. Trump — who pursued a strategy of stonewalling all congressional oversight subpoenas while in office, running out the clock on such efforts before the 2020 election — has instructed his former subordinates to defy subpoenas from the Jan. 6 committee and filed a lawsuit seeking to block the National Archives from turning over files from his White House.

Last week, Judge Chutkan, a 2014 Obama appointee, had signaled skepticism about Mr. Trump’s legal arguments. Mr. Trump’s lawyer asserted that his residual executive privilege powers meant the courts should block Congress from subpoenaing the files, notwithstanding Mr. Biden’s decision not to assert executive privilege over them in light of the circumstances.

Mr. Trump’s lawyer had argued that the public interest would be served by letting the former president keep the documents secret to preserve executive branch prerogatives. But Judge Chutkan wrote that his arguments did not “hold water” in light of Mr. Biden’s support for making them public and Congress’s need to investigate the attack without undue delays.

Congress and the Biden administration, she noted, “contend that discovering and coming to terms with the causes underlying the Jan. 6 attack is a matter of unsurpassed public importance because such information relates to our core democratic institutions and the public’s confidence in them. The court agrees.”

Earlier this week, Mr. Trump’s lawyer, Jesse R. Binnall, demonstrated an intent to keep going by asking Judge Chutkan to impose an emergency injunction on the National Archives barring it from turning over the records while he appealed the matter to the U.S. Court of Appeals for the District of Columbia Circuit.

Mr. Biden has instructed the head of the National Archives to turn over the first tranche of the materials subpoenaed by the Jan. 6 committee on Nov. 12, unless there is a court order by then blocking him from doing so.

Noting that Nov. 11 is a federal holiday, Mr. Binnall said he wanted to make sure there was an order preserving the status quo by then, and said he would file a request before the D.C. Circuit for such an injunction if Judge Chutkan did not act by Nov. 10.

“This case should be decided after thorough but expeditious consideration pursuant to America’s judicial review process, both before this court and on appeal, not by a race against the clock,” Mr. Binnall wrote, adding: “This is not a game.”

Judge Chutkan denied that request earlier Tuesday, saying it was premature since she had not yet issued any ruling. But she promised to rule “expeditiously in this matter” and said she would consider a motion for a stay by the losing party at that point.

AUSTIN, Texas--(BUSINESS WIRE)--As the first multifamily management company to be recognized in the Public Relations and Marketing Excellence Awards, … END_OF_DOCUMENT_TOKEN_TO_BE_REPLACED

There have been whispers of cooling housing and rental prices in the San Francisco Bay Area, but that hasn't yet translated into practical, noticeable … END_OF_DOCUMENT_TOKEN_TO_BE_REPLACED

Cars pass in Independence Square at twilight in Kyiv, Ukraine, Monday, Oct. 31, 2022. Rolling ... [+] blackouts are increasing across Ukraine as the … END_OF_DOCUMENT_TOKEN_TO_BE_REPLACED