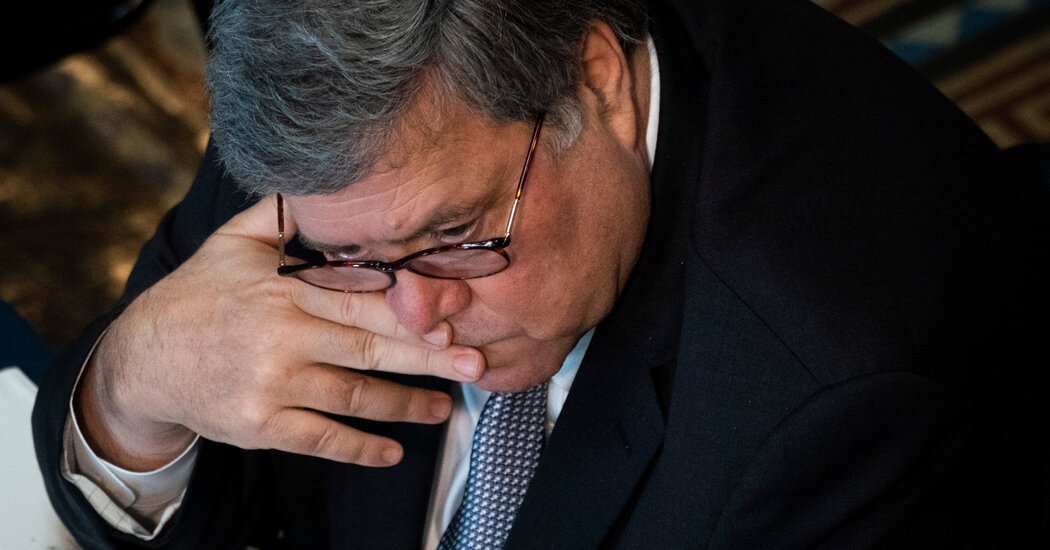 A federal judge in Washington accused the Justice Department under Attorney General William P. Barr of misleading her and Congress about advice he had received from top department officials on whether President Donald J. Trump should have been charged with obstructing the Russia investigation and ordered that a related memo be released.

Judge Amy Berman Jackson of the United States District Court in Washington said in a ruling late Monday that the Justice Department’s obfuscation appeared to be part of a pattern in which top officials like Mr. Barr were untruthful to Congress and the public about the investigation.

The department had argued that the memo was exempt from public records laws because it consisted of private advice from lawyers whom Mr. Barr had relied on to make the call on prosecuting Mr. Trump. But Judge Jackson ruled that it contained strategic advice, and that Mr. Barr and his aides already understood what his decision would be.

“The fact that he would not be prosecuted was a given,” Judge Jackson wrote of Mr. Trump.

She also singled out Mr. Barr for how he had spun the investigation’s findings in a letter summarizing the 448-page report before it was released, which allowed Mr. Trump to claim he had been exonerated.

Mueller investigation and the release of its findings to the public. In March 2019, the office of the special counsel overseeing the inquiry, Robert S. Mueller III, delivered its report to the Justice Department. In a highly unusual decision, Mr. Mueller declined to make a determination about whether Mr. Trump had illegally obstructed justice.

That opened the door for Mr. Barr to take control of the investigation. Two days after receiving the report, Mr. Barr sent a four-page letter to Congress saying that Mr. Trump would not be charged with obstructing justice and summarizing the report. Mr. Mueller’s team believed that Mr. Barr’s characterization of the document was misleading and privately urged him to release more of their findings, but Mr. Barr refused.

About a month later, around the time that the report was released to the public, Mr. Barr testified to Congress that he had made the decision not to charge Mr. Trump “in consultation with the Office of Legal Counsel and other department lawyers,” and that the decision to clear the president of wrongdoing had been left to Mr. Barr because Mr. Mueller had made no determination about whether Mr. Trump broke the law.

Judge Jackson said in the ruling that Mr. Barr had been disingenuous in those assertions, adding that it had not been left to him to make the decision about the prosecution.

She also said that in the litigation between the government and Citizens for Responsibility and Ethics in Washington, the Justice Department under Mr. Barr had claimed that the memo, written by his top officials, had been about legal advice he had relied on to make the decision and should be shielded from the public.

Under federal law, the Justice Department can claim that such advice should be shielded because it is “deliberative” and the possibility of releasing it could keep advisers from giving their unvarnished counsel because they fear it may become public someday.

But instead, Judge Jackson wrote, Mr. Barr and his aides had already decided not to bring charges against Mr. Trump. She reprimanded the department for portraying the memo as part of deliberations over whether to prosecute the president. She noted that she had been allowed to read the full memo before making her decision, over the objections of the Justice Department, and that it revealed that “excised portions belie the notion that it fell to the attorney general to make a prosecution decision or that any such decision was on the table at any time.”

She oversaw the trial of Mr. Trump’s longtime adviser Roger J. Stone Jr. and one of the cases against Mr. Trump’s onetime campaign chairman Paul Manafort. Although Mr. Trump has publicly attacked Judge Jackson, legal experts say she operated as an unbiased arbiter during the Russia investigation.

In late March, the judge similarly called into question the credibility of the Trump-era government’s description of documents in a Freedom of Information Act lawsuit brought by The New York Times for certain White House budget office emails related to Mr. Trump’s freeze on military aid to Ukraine, which led to his first impeachment.

The Justice Department argued that the emails were exempt from disclosure and filed sworn affidavits about their contents by lawyers for the Office of Management and Budget during the Trump administration. But Judge Jackson insisted on reading the emails for herself and wrote that “the court discovered that there were obvious differences between the affiants’ description of the nature and subject matter of the documents, and the documents themselves.”

The Seattle Seahawks are very much still in the running for Baker Mayfield. (Photo by Stacy ... [+] Revere/Getty Images) Getty Images The Seattle … END_OF_DOCUMENT_TOKEN_TO_BE_REPLACED

(CNN) — Kim Kyung-seop recalls going to cheap bars after class with his friends, where they binged on as much makgeolli as possible. "You know the … END_OF_DOCUMENT_TOKEN_TO_BE_REPLACED