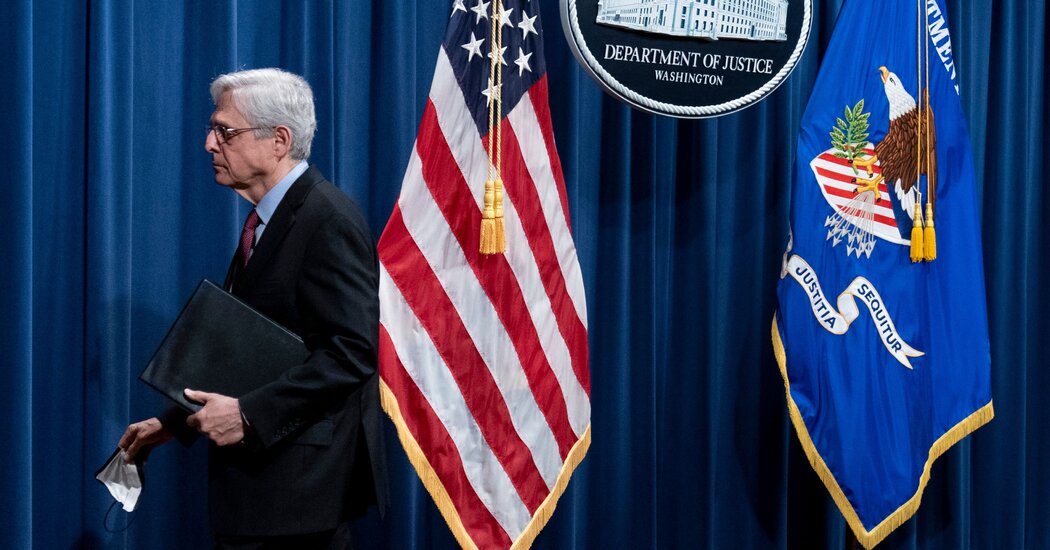 WASHINGTON — Attorney General Merrick B. Garland announced on Wednesday a sweeping investigation into the Minneapolis Police Department, signaling that the Biden administration will seek to combat police abuses around the country and apply stricter federal oversight to local forces.

The Justice Department will examine whether the Minneapolis police routinely use excessive force or treat minorities unfairly. The inquiry will also scrutinize police training and accountability practices, among other issues. Mr. Garland’s announcement came a day after the conviction of former Officer Derek Chauvin in the murder last year of George Floyd, a Black man whose death spurred the largest racial justice protests in decades.

“Good officers do not want to work in systems that allow bad practices,” Mr. Garland said in brief remarks delivered at the Justice Department. “Officers welcome accountability because accountability is an essential part of building trust with the community and public safety requires public trust.”

The Minneapolis police have long faced accusations of racism. Black residents are more likely to be pulled over, arrested or roughed up than white residents. Black people, who account for 20 percent of the city’s population, made up more than 60 percent of the victims in city police shootings from late 2009 through May 2019, police data shows.

testified against Mr. Chauvin this month.

President Biden had vowed as a candidate to fight excessive force by the police, and he called on lawmakers on Tuesday to resurrect the George Floyd Justice in Policing Act, a measure by Democrats aimed at curbing police misconduct and racial discrimination. Lawmakers in both parties said on Wednesday that they hoped Mr. Chauvin’s conviction could help revive the bill, which seeks to curtail qualified immunity for officers, ease the way for prosecutions and mandate more changes for departments.

Mr. Chauvin is being held in solitary confinement for 23 hours a day in the state’s only maximum-security prison, according to the authorities. Though officials at the prison in a suburb of St. Paul say Mr. Chauvin is being isolated for his own safety, prisoners are often sent to the wing as a punishment.

Such inquiries sometimes end in consent decrees, court-approved deals between the department and local governments that create and enforce a road map for training and operational changes. Former Attorney General Jeff Sessions had curbed the use of consent decrees, calling them unfair to police departments.

He has also characterized civil rights issues, including addressing police misconduct, as one of his top priorities. He has said that he sees Vanita Gupta, a well-known civil rights lawyer who was confirmed on Wednesday to serve as the Justice Department’s No. 3 official, as crucial to that mission, along with Kristen Clarke, Mr. Biden’s choice to run the department’s Civil Rights Division.

But overhauling police departments has always been a balancing act for the department, which relies heavily on state and local police forces to help fight crime. Mr. Garland and his top deputies were confirmed with broad support from police groups, and they have all said they do not support progressive proposals like defunding the police.

asked Mr. Garland to reopen the inquiry into his death in light of a New York Times report that Trump-era officials stopped prosecutors from pursuing a false statements case against the officer.

Federal prosecutors also face a high bar in pursuing charges of civil rights violations against the police. Years after a Staten Island grand jury declined to charge Officer Daniel Pantaleo in the death of Eric Garner, whom officers were trying to arrest on suspicion of selling untaxed cigarettes, the Justice Department said it would not file civil rights charges against the officer. Officials said prosecutors were unlikely to prove beyond a reasonable doubt that he willfully violated Mr. Garner’s civil rights.

The Justice Department is enforcing 16 settlements with law enforcement agencies, including 12 consent decrees. Since January 2017, it has concluded the implementation of consent decrees in East Haven, Conn.; in Warren, Ohio; and with the Maricopa County Sheriff’s Office in Arizona.

It also has four open investigations into law enforcement agencies, including two in Orange County, Calif.; another in Springfield, Mass.; and now in Minneapolis.

The department told officials there on Wednesday morning before Mr. Garland’s announcement that it would be investigating the police.

Gov. Tim Walz of Minnesota noted in a statement that the state’s Department of Human Rights had opened its own civil rights investigation and obtained “a groundbreaking temporary restraining order” against the department. Now, “under the leadership of President Biden and Attorney General Garland, the United States Department of Justice is also answering the call,” Mr. Walz said.

The broader inquiry will be led by career lawyers and staff in the department’s Civil Rights Division and the U.S. attorney’s office in Minnesota. They have already contacted community groups and residents and will question police officers as well, Mr. Garland said.

In addition to examining whether the department routinely uses excessive force — including during protests — investigators will look into whether officers’ treatment of people with behavioral health disabilities is unlawful. They will also review the department’s policies, including whether they are effective at ensuring that police officers act lawfully.

Mr. Floyd’s death underscored longstanding allegations of racism against the Minneapolis police force that have been so serious and sustained that Chief Arradondo sued his own department earlier in his career. Black residents have often filed excessive force complaints against Minneapolis officers, including Mr. Chauvin, who pinned Mr. Floyd to the ground for more than nine minutes.

Officers already felt pressure because of the scrutiny from community members and elected leaders over the years, said Inspector Charles Adams of the Minneapolis Police Department. While a Justice Department investigation could be beneficial, he said, he also expressed concern that officers could be more reluctant to police proactively out of fear that an interaction could go wrong.

“Now that’s going to heighten it even more,” he said.

The challenges in addressing systemic racial inequities “are deeply woven into our history,” Mr. Garland said, adding that it would take time and effort to build “trust between community and law enforcement.”

MIAMI--(BUSINESS WIRE)--Intelli Smart Homes, the leading smart home technology company, has been recognized as one of America’s fastest-growing … END_OF_DOCUMENT_TOKEN_TO_BE_REPLACED

Customers outside a Walmart store in Torrance, California, US, on Sunday, May 15, 2022. Walmart Inc. is scheduled to release earnings figures on May … END_OF_DOCUMENT_TOKEN_TO_BE_REPLACED

The past few years have been brutal on homebuyers' budgets. Would-be buyers have been priced out of some of the most desirable neighborhoods thanks to … END_OF_DOCUMENT_TOKEN_TO_BE_REPLACED