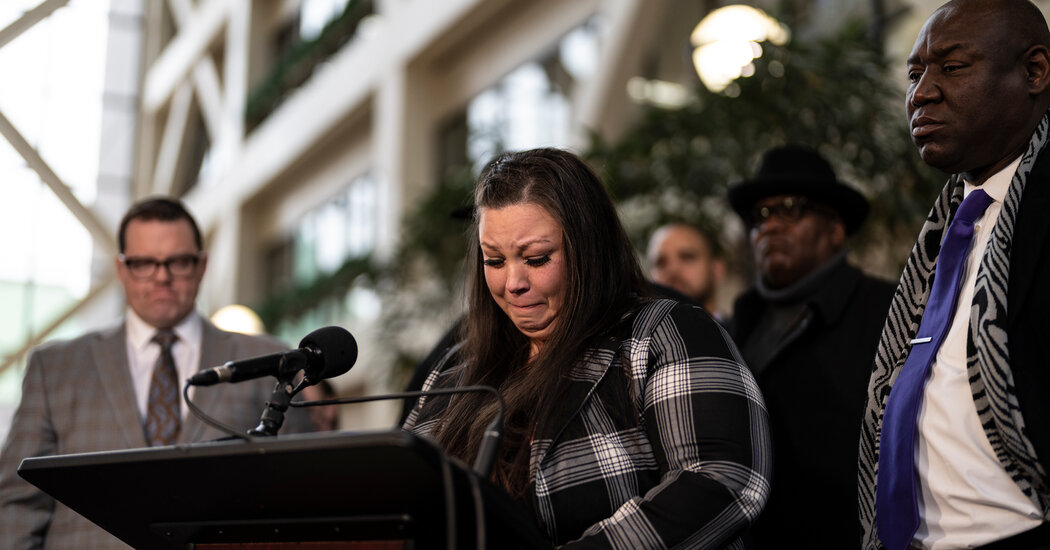 The former police officer who fatally shot Daunte Wright during a traffic stop was sentenced to two years in prison on Friday, far less than the standard of about seven years for manslaughter, after a judge said leniency was warranted because the officer had meant to fire her Taser and not her gun.

Jurors convicted the former officer, Kimberly Potter, on two counts of manslaughter in December. They found that she had acted recklessly when she fired a bullet into Mr. Wright’s chest after warning that she was going to stun him and yelling: “Taser! Taser! Taser!”

Ms. Potter, a 49-year-old white woman who served on the police force in Brooklyn Center, Minn., resigned two days after the shooting in April, during a time of chaotic protests over the killing of Mr. Wright, a 20-year-old Black man. She has been imprisoned since the guilty verdict on Dec. 23.

Judge Regina M. Chu sentenced Ms. Potter on only the most serious count, first-degree manslaughter, in accordance with Minnesota law. The state’s sentencing guidelines list the felony count as having a presumptive punishment of a little more than seven years in prison, though the maximum penalty is 15 years. Judge Chu said the case was far different from most manslaughter cases, as well as from other high-profile police killings.

convicted of murdering George Floyd. She added: “This is a cop who made a tragic mistake. She drew her firearm, thinking it was a Taser, and ended up killing a young man.”

Judge Chu handed down the sentence shortly after Ms. Potter sobbed while apologizing to Mr. Wright’s family in court on Friday.

“I am so sorry that I brought the death of your son,” Ms. Potter said. Speaking directly to Mr. Wright’s mother, she said: “Katie, I understand a mother’s love and I am sorry I broke your heart. My heart is broken for all of you.”

three were convicted of a crime, including two officers who fired fatal shots. Johannes Mehserle, a transit officer who shot and killed Oscar Grant III at a train station in Oakland, Calif., in 2009, was sentenced to two years in prison. Robert Bates, a volunteer sheriff’s deputy in Tulsa, Okla., was sentenced to four years in prison after he shot and killed a man while meaning to fire his Taser.

Prosecutors in the office of Keith Ellison, the Minnesota attorney general, had suggested that they would ask Judge Chu to sentence Ms. Potter to a prison term beyond the standard sentencing range of 6.2 to 8.6 years, but in a new court filing this week they instead said that a sentence within that range would be appropriate.

Ms. Potter’s lawyers asked the judge to sentence Ms. Potter to probation, arguing that she would be a “walking target” in prison and that the prosecution’s sentencing request was “a political statement.”

The shooting. As Mr. Wright broke free from another officer who was trying to handcuff him, Ms. Potter called out a warning, suggesting that she was using her Taser, and fired a single shot, killing Mr. Wright.

Taser vs. gun. How could Ms. Potter, a 26-year veteran of the force, mistake a gun for a Taser? While not common, there have been similar instances. In 15 other cases over the past 20 years reviewed by The Times, three officers were convicted.

Chyna Whitaker, the mother of Daunte Wright’s 2-year-old son, Daunte Jr., said she had become a single mother “not by choice, but by force,” and that Ms. Potter had taken Daunte Jr.’s “best friend away from him.”

It is quite likely that Ms. Potter will be released from prison after about 14 months, in April 2023. Under Minnesota law, prisoners are generally freed on a supervised release term after they serve two-thirds of their sentence, and Ms. Potter will be credited for the 58 days she has spent in custody since she was convicted.

Prosecutors in Ms. Potter’s case conceded that the shooting on April 11 was a mistake, and in the moments after she fired, body camera videos showed her shouting that she had grabbed the wrong weapon and falling to the ground in tears.

Mr. Wright had been driving with a friend to a carwash in a Minneapolis suburb when Officer Anthony Luckey, who was being trained by Ms. Potter, noticed that Mr. Wright had used the wrong turn signal. Officer Luckey followed Mr. Wright’s white Buick and noticed that the car had an air freshener dangling from the rearview mirror, which is against the law in many states, and that his license plate had an expired registration sticker.

Daunte Demetrius Wright had played basketball in high school and later worked at Taco Bell and a shoe store with his father. His mother testified at Ms. Potter’s trial that Mr. Wright had recently enrolled in a vocational school and was considering becoming a carpenter.

AUSTIN, Texas--(BUSINESS WIRE)--As the first multifamily management company to be recognized in the Public Relations and Marketing Excellence Awards, … END_OF_DOCUMENT_TOKEN_TO_BE_REPLACED

There have been whispers of cooling housing and rental prices in the San Francisco Bay Area, but that hasn't yet translated into practical, noticeable … END_OF_DOCUMENT_TOKEN_TO_BE_REPLACED

Cars pass in Independence Square at twilight in Kyiv, Ukraine, Monday, Oct. 31, 2022. Rolling ... [+] blackouts are increasing across Ukraine as the … END_OF_DOCUMENT_TOKEN_TO_BE_REPLACED