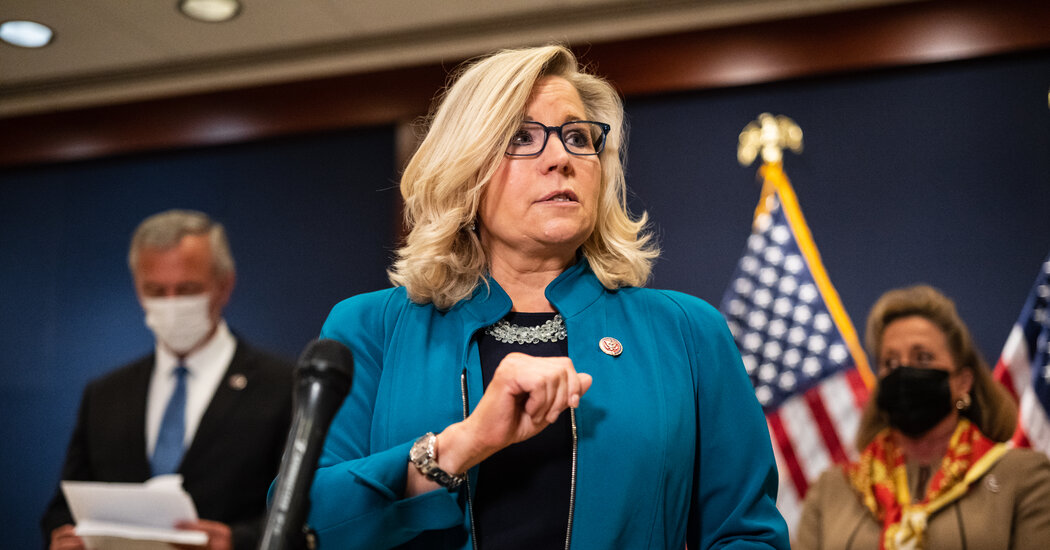 Representative Liz Cheney of Wyoming, the No. 3 House Republican, repudiated former President Donald J. Trump’s false claim that the 2020 election was stolen, accusing him on Monday of “poisoning our democratic system.”

Ms. Cheney’s comments on Twitter escalated her feud with the former president — and, by extension, dozens of her fellow House Republicans who have repeated his baseless assertions that the election was fraudulently decided, or spread falsehoods about the Jan. 6 assault on the Capitol by a pro-Trump mob.

The clash is threatening to reach a breaking point in the House, where a number of rank-and-file Republicans are growing increasingly frustrated with Ms. Cheney’s determination to continue calling out Mr. Trump and members of their party. Some have begun openly predicting that the Wyoming Republican, who overwhelmingly defeated a challenge to her leadership position in February after she had sided with Democrats in voting to impeach the former president, will soon face another such challenge and lose.

Apparently undaunted by such threats, Ms. Cheney issued a scathing rebuttal on Monday to a statement put out by Mr. Trump in which he called his 2020 loss “THE BIG LIE,” the term that Democrats have used to describe the former president’s lies about a stolen election.

Ms. Cheney wrote about an hour after Mr. Trump released his one-line statement. “Anyone who claims it was is spreading THE BIG LIE, turning their back on the rule of law, and poisoning our democratic system.”

Her comments are likely to stoke rising resentment of her within the House Republican Conference, whose leaders have publicly signaled irritation in recent weeks with Ms. Cheney’s insistence on taking every possible opportunity to denounce the Jan. 6 riot as an attack manufactured by Mr. Trump and his claims of a stolen election.

At a Republican retreat in Orlando last week, Representative Kevin McCarthy of California, the minority leader, declined to say whether she was a good fit to lead the conference, signaling a change of heart from February, when he vouched for Ms. Cheney as she was facing a vote to strip her of her leadership position. In remarks to Axios, Representative Steve Scalise of Louisiana, the No. 2 Republican, went slightly further, suggesting that Ms. Cheney was out of step with the conference.

“This idea that you just disregard President Trump is not where we are — and frankly, he has a lot to offer still,” Mr. Scalise said.

The tensions came to a head last week, after Ms. Cheney told reporters that any lawmaker who led the bid to invalidate President Biden’s electoral victory in Congress should be disqualified from running for president. She also broke with Mr. McCarthy on the scope of a proposed independent commission to investigate the Jan. 6 riot, telling reporters in response to a question that she believed it should be narrowly focused on the assault on the Capitol.

Mr. McCarthy and other Republican leaders have instead argued that the inquiry should be broadened to include “political violence across this country,” including by Black Lives Matter and Antifa activists.

The Seattle Seahawks are very much still in the running for Baker Mayfield. (Photo by Stacy ... [+] Revere/Getty Images) Getty Images The Seattle … END_OF_DOCUMENT_TOKEN_TO_BE_REPLACED

LANSING, Mich. — At least 357 sitting Republican legislators in closely contested battleground states have used the power of their office to discredit … END_OF_DOCUMENT_TOKEN_TO_BE_REPLACED