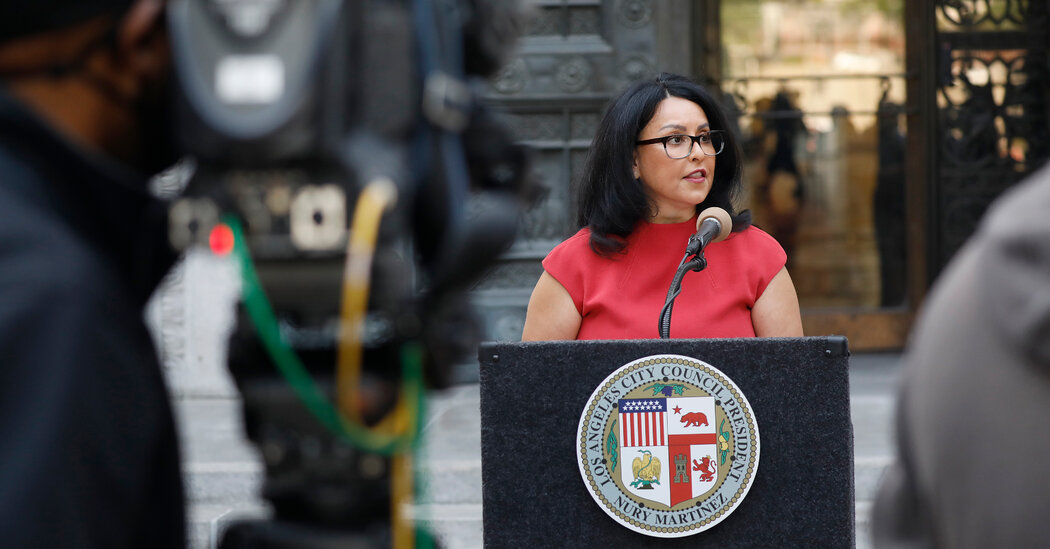 LOS ANGELES — The former president of the Los Angeles City Council resigned from elective office on Wednesday amid national outrage over racist remarks in a leaked recording, hours after the state attorney general announced an investigation into the redistricting process during which the comments were made.

The decision by the former Council leader, Nury Martinez, who had risen to one of the most powerful posts in the nation’s second-largest city, came three days after a year-old audio recording surfaced of her disparaging colleagues, constituencies and even the child of a fellow council member while discussing ways to change political boundaries to benefit Latino representatives.

Caught on tape with her were two other council members, Gil Cedillo and Kevin de León, as well as Ron Herrera, president of the Los Angeles County Federation of Labor. The men, all well-known members of the Latino political establishment in California, did not confront Ms. Martinez and at times kept the conversation going with derogatory comments of their own, according to the recording obtained by The New York Times.

Politicians all the way up to President Biden called for the three council members, all Democrats, to resign immediately. Mr. Herrera stepped down on Monday and Ms. Martinez initially relinquished her Council leadership post. She then announced that she was emotionally exhausted and taking a leave of absence from the Council.

be replaced with a “fully independent” body, charging that the current system had led to “extreme political interference” in the mapmaking.

The audio also included ugly remarks describing recent migrants from the Mexican state of Oaxaca, among other disparaging comments. Condemnation from elected officials, advocacy groups and others was swift and fierce.

Mr. Bonin gave a tearful speech on Tuesday, describing the emotional toll the ordeal had taken on his family, and told the three colleagues that they must resign in order for the city to move forward. Nearly 80 speakers lined up to demand that the council members step down, including many who said that all of the Council’s decisions should be re-evaluated in light of the racism, particularly on the redistricting process.

The Rev. Shane Harris, president of the People’s Association of Justice Advocates, a civil rights organization based in San Diego, called on Tuesday for the state to investigate.

“We are not only concerned about the racist remarks,” he said in a statement, “but we are even more concerned with the context of the call and whether civil rights have been violated in this meeting.”

AUSTIN, Texas--(BUSINESS WIRE)--As the first multifamily management company to be recognized in the Public Relations and Marketing Excellence Awards, … END_OF_DOCUMENT_TOKEN_TO_BE_REPLACED

There have been whispers of cooling housing and rental prices in the San Francisco Bay Area, but that hasn't yet translated into practical, noticeable … END_OF_DOCUMENT_TOKEN_TO_BE_REPLACED

Cars pass in Independence Square at twilight in Kyiv, Ukraine, Monday, Oct. 31, 2022. Rolling ... [+] blackouts are increasing across Ukraine as the … END_OF_DOCUMENT_TOKEN_TO_BE_REPLACED