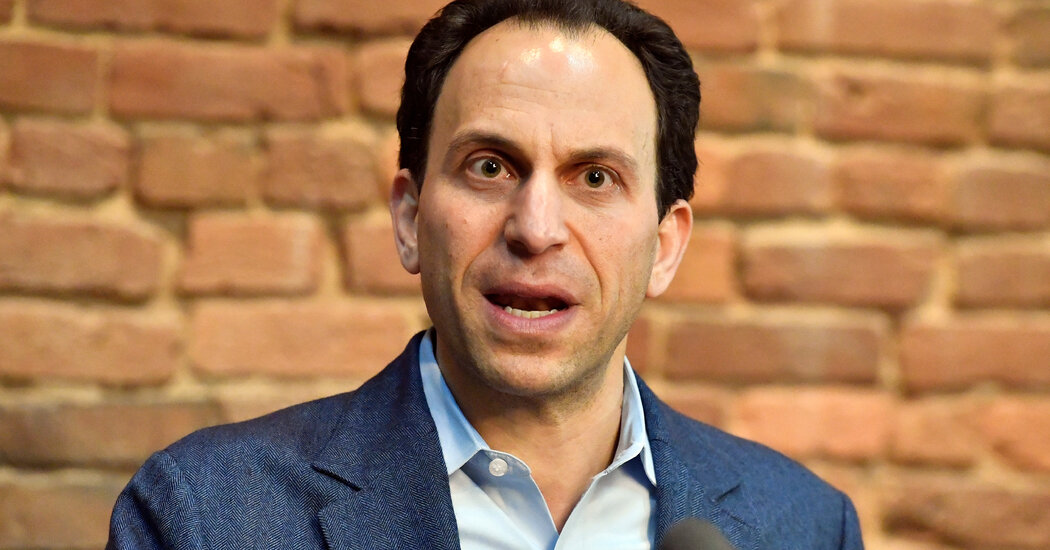 A mayoral candidate in Louisville, Ky., said he was the target of a shooting inside his campaign office on Monday that left him unharmed but shaken — and with a bullet hole in the back of his sweater.

The candidate, Craig Greenberg, said he and four members of his campaign team were in a morning meeting near downtown when a man walked in.

“When we greeted him, he pulled out a gun, aimed directly at me and began shooting,” Mr. Greenberg said at a news conference.

The gunman was standing in the doorway as he fired his weapon multiple times, Mr. Greenberg said, and a member of his campaign staff slammed the door shut before helping to build a barricade out of tables and desks.

media outlets, Mr. Brown is a Black Lives Matter activist who was involved in protests after city police officers killed Breonna Taylor during a botched drug raid in her apartment in March 2020. He has written columns for The Courier-Journal about race and social justice.

Mr. Brown announced in December that he would run for a Metro Council seat but county records show that he did not file to do so before last month’s deadline.

It was unclear whether he had a lawyer.

Mr. Greenberg declined to say whether he recognized the attacker, citing the police investigation, and it was not clear why he was targeted.

Chief Erika Shields of the Louisville Metro Police Department said at a news conference that possible reasons for the attack include Mr. Greenberg’s mayoral candidacy or his Jewish identity, but that it was also conceivable that the police were “dealing with someone who has mental issues or is venomous.”

a crowded race to replace Mayor Greg Fischer, a Democrat who cannot run again because he is limited to three terms. The party primary contests are in May, followed by a general election in November.

There are eight Democratic candidates, including David L. Nicholson, the Circuit Court clerk for Jefferson County; the Rev. Timothy Findley Jr. of Kingdom Fellowship Christian Life Center; and Shameka Parrish-Wright, a local social justice activist. Bill Dieruf, the mayor of Jeffersontown, a Louisville suburb, is one of the four Republicans in the race.

Mr. Greenberg is a businessman who has been the president of a boutique hotel chain and a member of the University of Louisville’s board of trustees. He has been endorsed by at least six members of the 26-person Metro Council, including its president.

The top issue on Mr. Greenberg’s campaign website is public safety. An eight-page plan outlines his desire, among other things, to hire nearly 300 police officers and to dedicate more resources to solving violent crime and making sure illegal guns stay off the streets.

“Too many Louisville families have experienced the trauma of gun violence,” Mr. Greenberg said after the shooting. “Too many in Louisville were not as blessed as my team and I were today to survive.

“Clearly, much more work needs to be done to end this senseless gun violence and make Louisville a safer place for everyone.”

an increase in violent crime during the coronavirus pandemic. The city set a record with 173 homicides in 2020, and then broke it with 188 homicides last year. There were 18 homicides this year through Feb. 6, according to the Police Department, slightly behind last year’s pace.

On Monday, Mr. Greenberg thanked the Police Department for its swift response to the shooting and its daily efforts to keep the city safe. He said he wanted to go home and hug his wife and two sons, pausing to compose himself.

“It all happened so quick, but it’s a very surreal experience,” he said of the shooting. “There are far too many other people in Louisville who have experienced that same feeling.”

Daniel Acker | Bloomberg | Getty ImagesHome prices are softening in most markets across the nation.Yet home prices are still higher compared with a … END_OF_DOCUMENT_TOKEN_TO_BE_REPLACED

Joel Silver has been responsible for some of Hollywood's biggest franchises, including "The Matrix," "Die Hard," "Predator," and "Lethal Weapon."So … END_OF_DOCUMENT_TOKEN_TO_BE_REPLACED