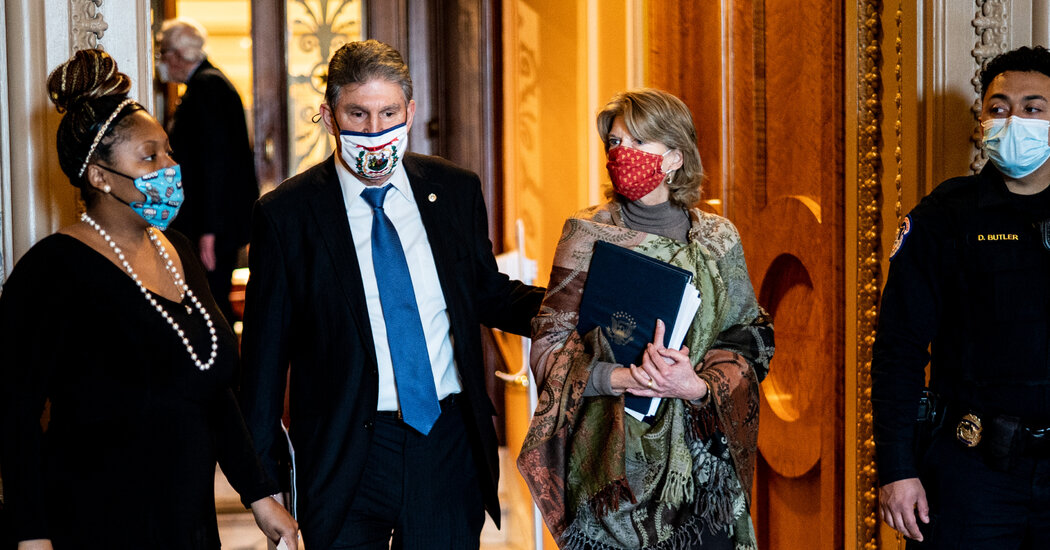 WASHINGTON — Senator Joe Manchin III of West Virginia, a moderate Democrat who has often balked at efforts to alter Senate rules to allow his party to muscle through its agenda over Republican opposition, signaled a willingness on Sunday to make changes to the filibuster and support future party-line votes if bipartisan negotiations proved unsuccessful.

Mr. Manchin, whose role as perhaps the most centrist Democrat in an evenly divided Senate gives him outsize influence, remained adamant on Sunday that he would not vote to outright abolish the 60-vote supermajority threshold, which requires Democrats to attract the support of 10 Republicans to pass most legislation.

But he reiterated that he would support altering the rules of the practice and potentially establishing a “talking filibuster” — requiring any senator objecting to ending debate to remain on the floor and speak for the entire time. That could make filibusters far less frequent, and give Democrats far more opportunities to pass legislation on party-line votes, with Vice President Kamala Harris casting the tiebreaker.

“If you want to make it a little bit more painful, make him stand there and talk, I’m willing to look at any way we can,” Mr. Manchin said of the filibuster on NBC’s “Meet the Press.” “But I’m not willing to take away the involvement of the minority.”

pass President Biden’s $1.9 trillion stimulus in a party-line vote on Saturday, and said he would be open to more such votes in the future.

His comments were also the latest signal that Democrats were already beginning to build on the lessons of wrangling Mr. Biden’s first major legislative initiative past united Republican opposition as they turn to more politically freighted ambitions. Several Democrats are pushing for a future where legislation could follow a more aggressive and partisan pattern set by the stimulus: If bipartisan talks do not translate into Republican votes, Democrats push ahead on the policies they prefer.

The sweeping relief package, which the House is expected to take up early this week after the Senate passed the measure 50 to 49 on Saturday, is the first pandemic aid bill set to become law without any Republican votes.

It will provide for up to $1,400 in direct payments to individuals, a $300 weekly federal unemployment supplement through Labor Day and billions of dollars for vaccine distribution, schools, small businesses and other institutions. It also includes a significant investment in safety net spending as part of the largest antipoverty effort in a generation.

Democrats, unwilling to compromise on the size and scope of the package after what they see as grave miscalculations during the Great Recession, pursued a fast-track budget process known as reconciliation as a way to bypass the filibuster and Republican opposition.

But the reconciliation process has to be used sparingly, only for legislation that has a direct effect on the federal budget. Mr. Manchin said he would be willing “to go to a reconciliation to where we have to get something done.”

“But I’m not going to go there until my Republican friends have the ability to have their say also,” Mr. Manchin added. “I’m hoping they will get involved to the point where we have 10 of them that will work with 50 of us.”

Democrats have several priorities on which they could find those 10 votes difficult to pick up, including voting rights legislation and an immigration overhaul.

But even if Democrats pursue ways to pass legislation with only their own votes, Mr. Manchin showed this weekend that it will not be easy. He stalled final passage of the stimulus bill and instigated the longest open vote in modern Senate history as Democratic leaders scrambled to appease his concerns about the duration of the unemployment benefit and whether a tax benefit would be targeted based on income.

While Democrats were ready to move forward with a provision that continued the existing $300 weekly benefit through October and made up to $10,200 of 2020 benefits tax free, Mr. Manchin balked, he said on Saturday, after learning about the details around 10 a.m. Friday. He had also made a promise, according to two people familiar with the private conversation, to Senator Rob Portman, Republican of Ohio, that Mr. Manchin would support an amendment that would end the $300 benefit after mid-July.

“Look, I always respect my members, and who they are and what they feel,” Senator Chuck Schumer of New York, the majority leader, said in an interview after the legislation passed on Saturday. With his feet propped up, shoeless, in his office, he added, “We knew we could not have the Portman amendment succeed or the bill would go down, and we never veered away from that.”

Mr. Manchin ultimately agreed to extending the $300 provision through Labor Day, a week longer than the $400 increase the House approved, and signed off on keeping the tax benefits for those whose household income was less than $150,000. On Sunday, he rejected the suggestion that Democrats would have to tailor their agenda to his beliefs, arguing that he wanted to just “look for that moderate middle” and emphasizing that they ultimately reached a compromise.

“I’m the same person I have been all my life and since I’ve been in the public offices. I’m the same,” Mr. Manchin said on ABC’s “This Week.” “I’ve been voting the same way for the last 10 years.”

Mr. Manchin’s comments came as Democrats celebrated the passage of the bill. Even with some provisions whittled down to accommodate both moderate concerns and arcane Senate rules, progressives were ebullient on Saturday, with Senator Sherrod Brown, Democrat of Ohio, telling reporters: “This is the best day of my Senate life. It really is.”

Democrats took time to shower praise on Senators Raphael Warnock and Jon Ossoff of Georgia, as well as the voters who sent them to Washington and cemented Democratic control of the Senate.

“There is no question that the people of Georgia deserve a great deal of credit for what happened here today,” Mr. Warnock said after the vote. “We simply would not be here had they not stood up in such a profound way in this historic election, and I’m deeply honored to be playing a role in government actually working for the people.”

But with frustration still bubbling over the exclusion of a provision raising the federal minimum wage to $15, some liberal lawmakers and activists have mounted a renewed campaign to end the filibuster, which has long curtailed their legislative ambitions. In the interview, Mr. Schumer acknowledged that some Democratic ambitions could not be advanced using the reconciliation process because of the strict rules, but insisted that the unity on Saturday “is going to help us stay unified to go on to other things.”

Kevin McKenzie and Martine van Hamel were standing in the dining room of their weekend house in Woodstock, N.Y., trying to figure out when they got … END_OF_DOCUMENT_TOKEN_TO_BE_REPLACED