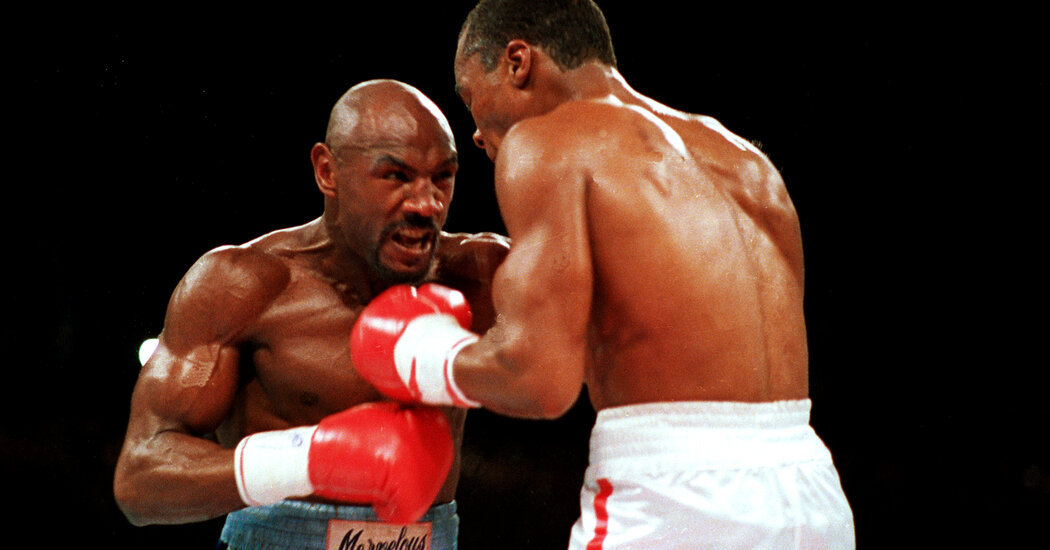 Marvelous Marvin Hagler, who ruled boxing as the middleweight champion from 1980 until 1987, defending his title 12 times until he lost to Sugar Ray Leonard in a hotly contested split decision, died on Saturday. He was 66.

Hagler’s death was announced by his wife, Kay G. Hagler, on the verified Facebook page of the Marvelous Marvin Hagler Fan Club. She said he had died unexpectedly at his home in New Hampshire.

Hagler was one of the most formidable fighters of his era, defeating a string of challengers that included Roberto Duran and Thomas Hearns, whom he knocked out in the third round of a 1985 fight that he considered the highlight of his career.

He was inducted into the International Boxing Hall of Fame in 1993.

“I always wanted to be somebody,” Hagler told Sports Illustrated in 1982. “Baseball, I played like I was Mickey Mantle or Willie Mays; basketball, I’d be Walt Frazier or Kareem; boxing, I’d pretend I was Floyd Patterson or Emile Griffith.”

1967 riots, when fires and violent clashes between the Newark police, National Guard troops and Black residents consumed the city and 26 people were killed.

He learned to box in Brockton, the hometown of another great prizefighter, Rocky Marciano, where he was trained by the brothers Pat and Goody Petronelli, who ran a gym in the working-class city. During the day, he worked for the Petronellis’ construction company and was paid $3 an hour.

“He needed money very bad,” Pat Petronelli recalled in 1987. “So he’d only eat what he had to. He’d borrow 50 cents for a submarine sandwich, 25 cents for a soda — we’d deduct it on Fridays. He didn’t spend unless he thought it was necessary.”

At 18, Hagler capped his amateur career by winning the national Amateur Athletic Union tournament in the 165-pound class. He turned professional a week later. For years, he trained at the tip of Cape Cod, reveling in the isolation and running the sand dunes in Provincetown, Mass., to build his strength and fitness.

told The New York Times in 1981 from his room in the Provincetown Inn, as a blizzard raged outside. “All the great champions did the same. Rocky Marciano, Muhammad Ali up on his mountain at Deer Lake. They put themselves in jail. I put myself in jail.”

Mr. Hagler always considered himself something of an outcast in boxing, perennially disrespected, and he fought his way up gradually, taking on Bobby Watts, Willie “The Worm” Monroe, Eugene “Cyclone” Hart and Bennie Briscoe before finally getting a shot at the title in 1979, according to the Boxing Hall of Fame.

That year, however, the judges gave Hagler only a draw against Vito Antuofermo, who remained the champion.

He had to wait until 1980 to claim the title from Alan Minter in London. Because the English spectators showered the ring with bottles when the one-sided fight was stopped, Hagler’s hand was not raised in victory.

Many boxing enthusiasts consider Hagler’s bout against Hearns to be his finest, and Hagler said that it was in that match that he was able to finally prove his greatness.

beat him in a 12-round split decision in 1987 at the Caesars Palace outdoor arena. Hagler, who had not lost a fight since 1976, had been the heavy favorite, and he had a special distaste for Leonard, whom he called “Mr. Politician” and “Mr. Middle Class.”

“He is a phony,” Hagler told The Times in 1987. “He’s been protected all his life. Besides, if he hadn’t become a boxer, he could have done other things. Me? I had nowhere else to go.”

But Leonard put on a stunning display of boxing artistry — painting with jabs and uppercuts — to score an upset.

Hagler announced his retirement in 1988, saying he didn’t want to wait for a rematch with Leonard. Over his career, he had fought 67 bouts, winning 62, losing three and fighting two to a draw, the Boxing Hall of Fame said. He had 52 knockouts.

“I feel in my heart I’m still the champ,” Hagler had said after losing his title. “I really hate the fact that they took it from me, and gave it to, of all people, Sugar Ray Leonard.”

Chief Covelli said Mr. Crimo planned the shooting for several weeks, but that the authorities had not yet established what his motive was. “We have no … END_OF_DOCUMENT_TOKEN_TO_BE_REPLACED

Kevin McKenzie and Martine van Hamel were standing in the dining room of their weekend house in Woodstock, N.Y., trying to figure out when they got … END_OF_DOCUMENT_TOKEN_TO_BE_REPLACED