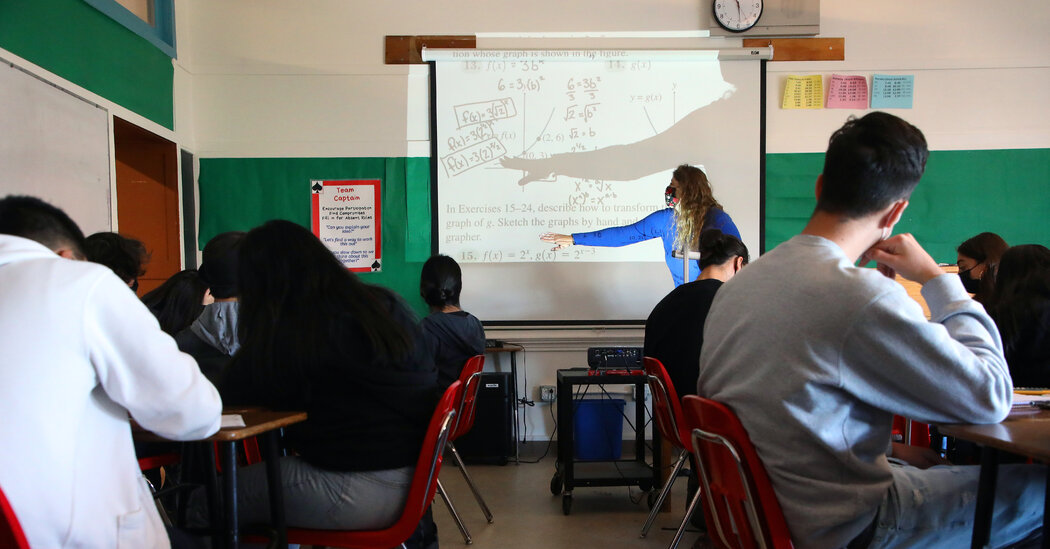 U.S. students in most states and across almost all demographic groups have experienced troubling setbacks in both math and reading, according to an authoritative national exam released on Monday, offering the most definitive indictment yet of the pandemic’s impact on millions of schoolchildren.

In math, the results were especially devastating, representing the steepest declines ever recorded on the National Assessment of Educational Progress, known as the nation’s report card, which tests a broad sampling of fourth and eighth graders and dates to the early 1990s.

In the test’s first results since the pandemic began, math scores for eighth graders fell in nearly every state. A meager 26 percent of eighth graders were proficient, down from 34 percent in 2019.

Fourth graders fared only slightly better, with declines in 41 states. Just 36 percent of fourth graders were proficient in math, down from 41 percent.

a downward trend that had begun even before the pandemic. No state showed sizable improvement in reading. And only about one in three students met proficiency standards, a designation that means students have demonstrated competency and are on track for future success.

The test results could be seized as political fodder — just before the midterms — to re-litigate the debate over how long schools should have stayed closed, an issue that galvanized many parents and teachers.

The bleak results underscored how closing schools hurt students, but researchers cautioned against drawing fast conclusions about whether states where schools stayed remote for longer had significantly worse results.

Decisions about how long to keep schools closed often varied even within states, depending on the local school district and virus transmission rates. And other factors, such as poverty levels and a state’s specific education policies, may also influence results.

The picture was mixed, and performance varied by grade level and subject matter in ways that were not always clear cut.

reading scores had also declined in many states.

stayed remote for longer than wealthier schools did during the pandemic, deepening divides.

The impact was especially stark for struggling students. In a survey included in the test, only half of fourth graders who were low performing in math said they had access to a computer at all times during the 2020-21 school year, compared with 80 percent of high-performing students.

Similarly, 70 percent said they had a quiet place to work at least some of the time, compared with 90 percent for high performers.

In one bright spot, most big city school districts, including New York City, Dallas and Miami-Dade, held steady in reading.

are more likely to drop out of high school, or not graduate on time. And ninth grade — where eighth graders who took the test in the spring are now — is considered a critical year for setting students up to graduate high school and attend college.

“We need to be doing something to target our resources better at those students who have been just historically underserved,” said Denise Forte, the interim chief executive at the Education Trust, which focuses on closing gaps for disadvantaged students.

Frequent small-group tutoring and doubling up on math classes are among the strategies that have shown promise.

Kevin Huffman, a former education commissioner in Tennessee who is now the chief executive of Accelerate, a nonprofit focused on tutoring, urged leaders to set aside finger pointing about what went wrong during the pandemic, and instead make a “moral commitment” to helping students recover.

“We cannot, as a country, declare that 2019 was the pinnacle of American education,” he said.

AUSTIN, Texas--(BUSINESS WIRE)--As the first multifamily management company to be recognized in the Public Relations and Marketing Excellence Awards, … END_OF_DOCUMENT_TOKEN_TO_BE_REPLACED

There have been whispers of cooling housing and rental prices in the San Francisco Bay Area, but that hasn't yet translated into practical, noticeable … END_OF_DOCUMENT_TOKEN_TO_BE_REPLACED

Cars pass in Independence Square at twilight in Kyiv, Ukraine, Monday, Oct. 31, 2022. Rolling ... [+] blackouts are increasing across Ukraine as the … END_OF_DOCUMENT_TOKEN_TO_BE_REPLACED