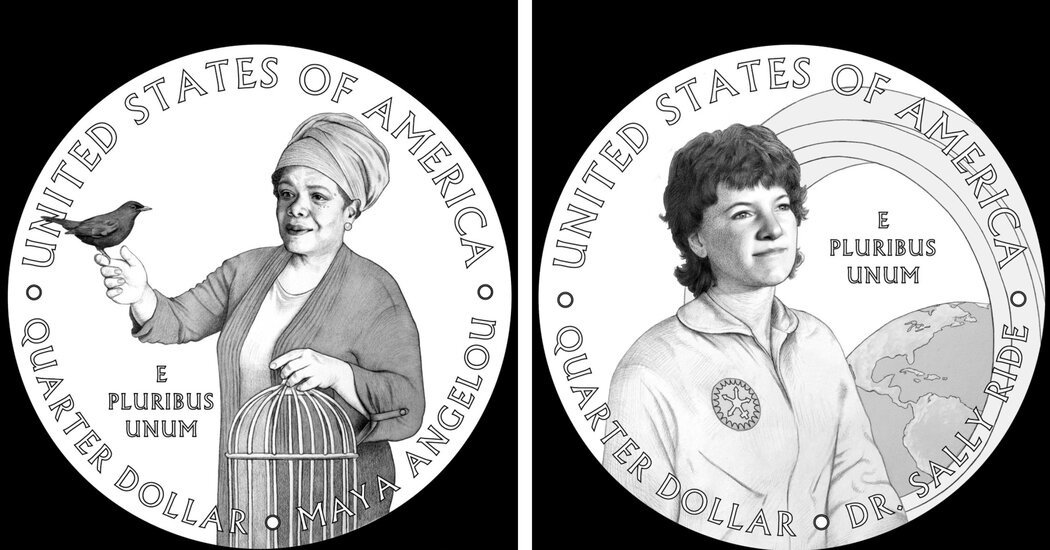 The writer and poet Maya Angelou and the astronaut Sally Ride, the first American woman to fly in space, are the first women who will appear on a series of quarters to be issued by the U.S. Mint over the next four years.

Each woman will be honored on the reverse, or tails, side of the coins, which will enter circulation in January as part of the American Women Quarters Program. The heads side of the coin will feature a new design of George Washington.

Dr. Ride, who died at 61 in 2012, “would be so moved by this great honor,” her partner, Tam O’Shaughnessy, said in a statement, adding that “this tribute reflects Sally’s legacy not only as a trailblazing astronaut but also as a champion of diversity and inclusion in STEM fields.”

Billie Jean King, the trailblazing tennis champion, hailed the announcement as “a richly deserved honor for both.”

statement that “for too long, many of the women who have contributed to our country’s history have gone unrecognized, especially women of color.”

Dr. Ride and Ms. Angelou, who died at 86 in 2014, “paved the way for many who came after them and inspired young women to carry on their legacy,” Ms. Lee said.

Ms. Angelou’s landmark 1969 memoir, “I Know Why the Caged Bird Sings,” was among the first autobiographies by a 20th-century Black woman to reach a wide general readership. She recited a poem at President Bill Clinton’s first inauguration in 1993, and was awarded the Presidential Medal of Freedom by President Barack Obama in 2011.

Dr. Ride — who recalled saying, “I’m one of those people” upon seeing a NASA newspaper ad with the qualifications required for astronauts — flew on the Space Shuttle Challenger in 1983 and 1984. She was on the roster for a third shuttle mission when the Challenger exploded shortly after liftoff on Jan. 28, 1986. The shuttle program was suspended, and she retired the next year.

The American Women Quarters Program will feature as many as 20 women “from a wide spectrum of fields including, but not limited to, suffrage, civil rights, abolition, government, humanities, science, space, and the arts,” the U.S. Mint said in a statement, adding that the women would be from “ethnically, racially, and geographically diverse backgrounds.”

wrote in an opinion piece in USA Today that “as female U.S. senators, our story would not have been possible without these women who came before us.”

“We look forward to being reminded of their legacies every time we see their faces on a new quarter,” they wrote.

The U.S. Mint has asked the public to submit suggestions for women to be honored on future quarters. Each design will celebrate “the accomplishments and contributions” of a prominent American woman. The law says that no living person will be depicted in the coin designs.

Treasury Secretary Janet Yellen — the first woman to hold that position — will select the featured women after consulting with the Smithsonian Institution’s American Women’s History Initiative, the National Women’s History Museum and the Congressional Bipartisan Women’s Caucus, the Mint said. Ms. Yellen will also approve the final designs for the coins.

It’s a property that offers a unique open floor plan—plus a hot tub with a view.“It was a Methodist church located in a historic little area of St. … END_OF_DOCUMENT_TOKEN_TO_BE_REPLACED