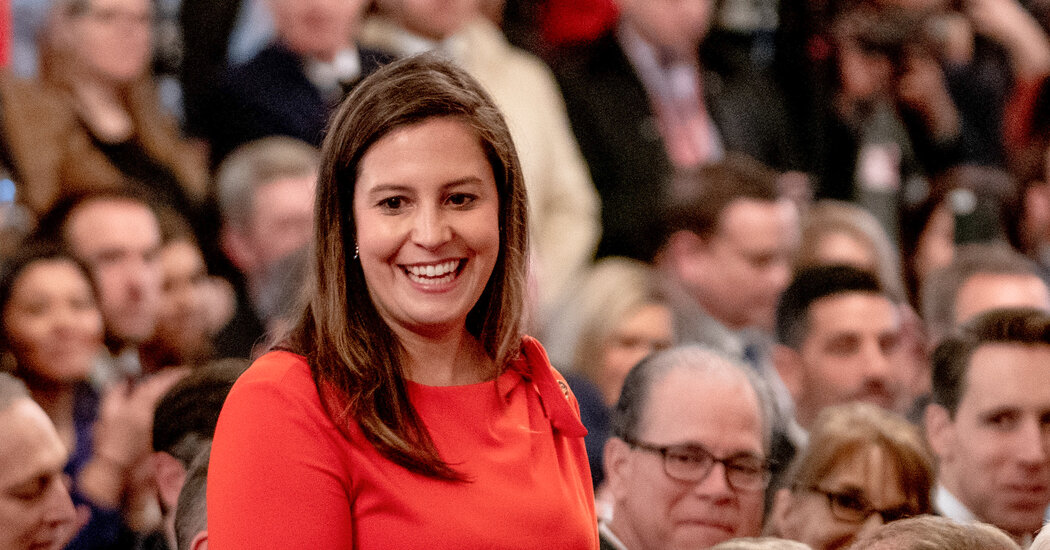 WASHINGTON — Representative Kevin McCarthy, the minority leader, on Sunday officially endorsed Representative Elise Stefanik in her bid to oust the No. 3 House Republican, Representative Liz Cheney, who has hemorrhaged support over her repudiation of former President Donald J. Trump’s lies about election fraud.

“Yes, I do,” Mr. McCarthy told the Fox News host Maria Bartiromo when she asked whether he supported Ms. Stefanik’s push to become the Republican conference chairwoman.

“We need to be united, and that starts with leadership,” Mr. McCarthy said. “That’s why we will have a vote next week.”

The endorsement from Mr. McCarthy — who had been working behind the scenes on Ms. Stefanik’s behalf for days — came after Mr. Trump and Representative Steve Scalise of Louisiana, the No. 2 House Republican, endorsed Ms. Stefanik.

willingness to embrace his false claims of election fraud have become the ultimate litmus tests among Republicans for holding a leadership position in the House. Ms. Cheney, who represents Wyoming and was once considered a future speaker, has a more conservative voting record than Ms. Stefanik. But Ms. Stefanik, a fourth-term congresswoman from New York, has joined in Mr. Trump’s efforts to cast doubt on the legitimacy of President Biden’s victory in the 2020 election.

Representative Jim Banks of Indiana, the chairman of the conservative Republican Study Committee, made the case against Ms. Cheney on “Fox News Sunday.”

“Right now it’s clear that she doesn’t represent the views of the majority of our conference,” Mr. Banks, who has co-sponsored legislation with Ms. Cheney opposing troop reductions in Afghanistan, told the show’s host, Chris Wallace.

Mr. Banks — who like Mr. McCarthy and Mr. Scalise joined in objections to certifying Mr. Biden’s victory — added that his split from Ms. Cheney came after she criticized a memo he had written outlining a strategy for winning working-class voters.

“Liz Cheney is the only Republican leader who attacked the memo about making the Republican Party the party of the working class,” he said.

Some House Republicans tried to oust Ms. Cheney from her leadership post in February after she voted to impeach Mr. Trump for his role in inciting the Jan. 6 attack on the Capitol. Ms. Cheney easily turned back that challenge — winning a 145-to-61 caucus vote — after Mr. McCarthy delivered an impassioned speech in her defense.

But now it is other Republicans who are rallying to her side.

Senator Bill Cassidy of Louisiana, who voted to convict Mr. Trump in his second impeachment trial, argued that the party needed to adopt a bigger-tent philosophy in which both supporters and critics of Mr. Trump were welcome.

“You look at polls, there’s a whole group of folks that agree with Liz Cheney, and so for us to win in 2022 and 2024, we need everybody,” Mr. Cassidy said Sunday on NBC’s “Meet the Press.”

Representative Adam Kinzinger, Republican of Illinois, pointed out that Mr. McCarthy had said Mr. Trump bore responsibility for the Capitol riot — only to later insist that others stop talking about it.

“It is incredible,” Mr. Kinzinger said on CBS’s “Face the Nation.” “Liz Cheney is saying exactly what Kevin McCarthy said the day of the insurrection. She has just consistently been saying it.”

“For me, I’m a conservative,” he added. “I’m going to fight for the soul of this party. But every member, not just leadership, every congressman, every state representative, every member of the party that pulls a ballot in the primary has to decide, are we going to exist on lies or exist on the truth?”

The Seattle Seahawks are very much still in the running for Baker Mayfield. (Photo by Stacy ... [+] Revere/Getty Images) Getty Images The Seattle … END_OF_DOCUMENT_TOKEN_TO_BE_REPLACED

(CNN) — Kim Kyung-seop recalls going to cheap bars after class with his friends, where they binged on as much makgeolli as possible. "You know the … END_OF_DOCUMENT_TOKEN_TO_BE_REPLACED