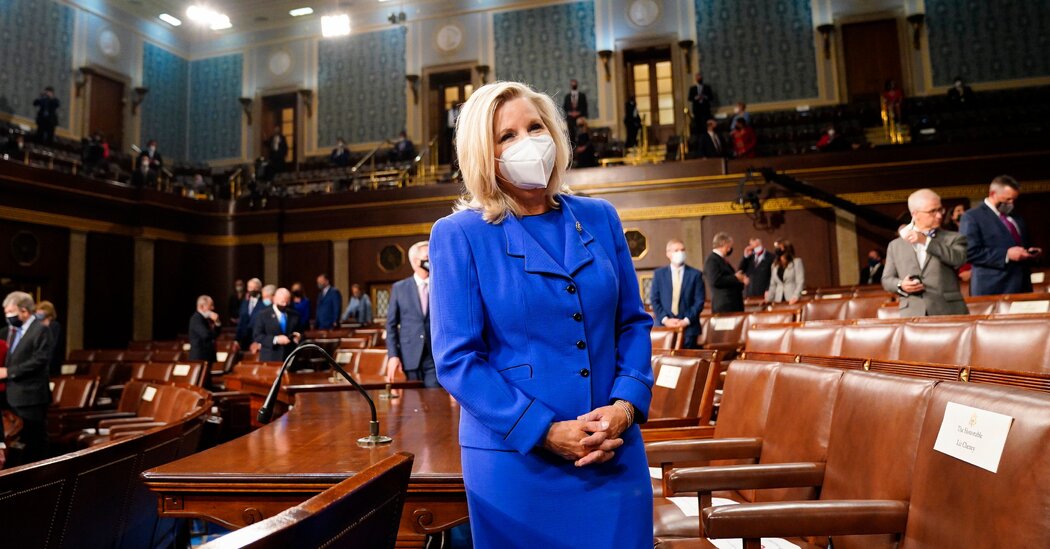 Representative Kevin McCarthy of California, the minority leader, said on Tuesday that House Republican lawmakers had expressed concerns to him over whether Representative Liz Cheney of Wyoming, the party’s No. 3, could continue in her position, feeding rising speculation that Ms. Cheney could be stripped of her leadership post.

“I have heard from members concerned about her ability to carry out the job as conference chair, to carry out the message,” Mr. McCarthy said on Fox. “We all need to be working as one, if we’re able to win the majority.”

Mr. McCarthy’s remarks were a striking escalation of a growing feud pitting Ms. Cheney — who has been vocal in criticizing Donald J. Trump and repudiating his false claims that the 2020 election was stolen — against House Republicans, many of whom have parroted such assertions and embraced the former president.

Mr. McCarthy chose Mr. Trump’s favorite news program, “Fox and Friends,” as the venue for his latest airing of the party’s concerns about Ms. Cheney, whose fate has become a bellwether for the future of the party. His decision to do so reflected growing resentment among rank-and-file Republicans about Ms. Cheney’s determination to continue calling out Mr. Trump and members of their party.

When a group of pro-Trump Republicans in the House moved in February to remove Ms. Cheney from her leadership role, citing her decision to vote to impeach Mr. Trump, Mr. McCarthy defended her in a speech just ahead of the secret-ballot vote, which she won overwhelmingly. But in the weeks that followed, Mr. McCarthy appears to have soured on her as Ms. Cheney has continued to contradict him, chiefly on whether Mr. Trump should continue to play a leading role in the party.

The turning point came last week at a conference retreat in Orlando, where Ms. Cheney told reporters that any lawmaker who led the bid to invalidate President Biden’s electoral victory in Congress should be disqualified from running for president. She also broke with leading Republicans on the scope of a proposed independent commission to investigate the Jan. 6 riot, saying it should be narrowly focused on the assault on the Capitol, not on Antifa and Black Lives Matter protests, as Mr. McCarthy and others in the party have insisted.

Some lawmakers are so certain that the conference will call a vote to strip Ms. Cheney of her position that they have begun floating names of Republicans who could replace her in the third-ranking post. That endeavor is also fraught. Mindful of the optics of replacing the only woman in leadership with another man, Republicans are eyeing choosing a woman.

Several of them are bullish on the prospect of Representative Elise Stefanik of New York, an outspoken rising star within the party who has toiled to increase the number of women in the party, but it is not clear she would be interested in the job. Also cited as a possibility was Representative Jackie Walorski of Indiana, who as the top Republican on the Ethics Committee earlier this year successfully balanced the job of condemning Representative Marjorie Taylor Greene’s past conspiratorial statements while arguing she should not be kicked off her committees.

The Seattle Seahawks are very much still in the running for Baker Mayfield. (Photo by Stacy ... [+] Revere/Getty Images) Getty Images The Seattle … END_OF_DOCUMENT_TOKEN_TO_BE_REPLACED

LANSING, Mich. — At least 357 sitting Republican legislators in closely contested battleground states have used the power of their office to discredit … END_OF_DOCUMENT_TOKEN_TO_BE_REPLACED