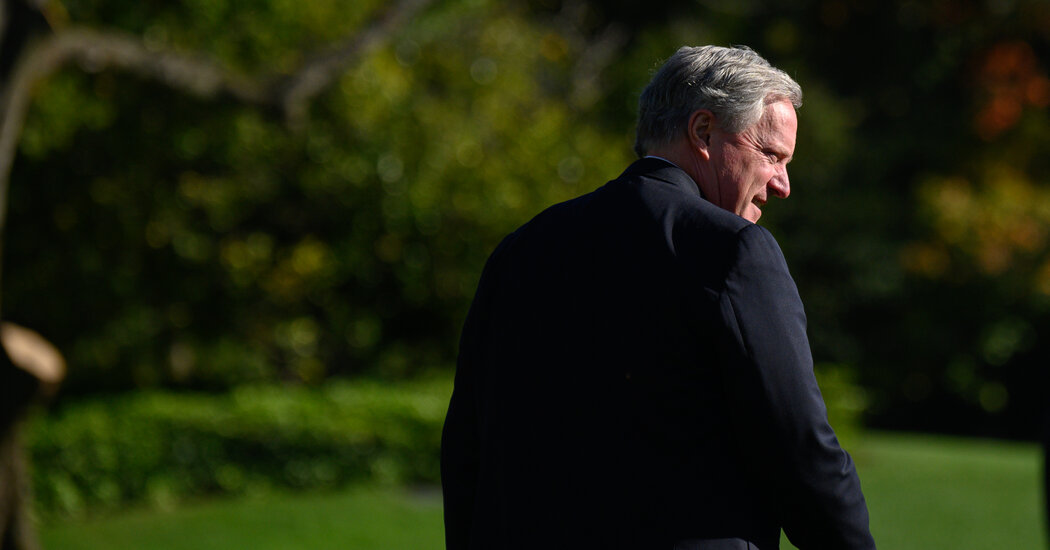 Mr. Meadows’s outreach to Mr. Rosen was audacious in part because it violated longstanding guidelines that essentially forbid almost all White House personnel, including the chief of staff, from contacting the Justice Department about investigations or other enforcement actions.

“The Justice Department’s enforcement mechanisms should not be used for political purpose or for the personal benefit of the president. That’s the key idea that gave rise to these policies,” said W. Neil Eggleston, who served as President Barack Obama’s White House counsel. “If the White House is involved in an investigation, there is at least a sense that there is a political angle to it.”

On Jan. 1, Mr. Meadows wrote that he wanted the Justice Department to open an investigation into a discredited theory, pushed by the Trump campaign, that anomalies with signature matches in Georgia’s Fulton County had been widespread enough to change the results in Mr. Trump’s favor.

Mr. Meadows had previously forwarded Mr. Rosen an email about possible fraud in Georgia that had been written by Cleta Mitchell, a lawyer who worked with the Trump campaign. Two days after that email was sent to Mr. Rosen, Ms. Mitchell participated in the Jan. 2 phone call, during which she and Mr. Trump pushed Mr. Raffensperger to reconsider his finding that there had not been widespread voter fraud and that Mr. Biden had won. During the call, Mr. Trump asked Mr. Raffensperger to “find” him the votes necessary to declare victory in Georgia.

Mr. Meadows also sent Mr. Rosen a list of allegations of possible election wrongdoing in New Mexico, a state that Mr. Trump’s personal lawyer Rudolph W. Giuliani had said in November was rife with fraud. A spokesman for the state’s secretary of state said at the time that New Mexico’s elections were secure. To confirm the accuracy of the vote, auditors in the state hand-counted random precincts.

And in his request that the Justice Department investigate the Italy conspiracy theory, Mr. Meadows sent Mr. Rosen a YouTube link to a video of Brad Johnson, a former C.I.A. employee who had been pushing the theory in videos and statements that he posted online. After receiving the video, Mr. Rosen said in an email to another Justice Department official that he had been asked to set up a meeting between Mr. Johnson and the F.B.I., had refused, and had been asked to reconsider.

Editor’s Note: This story is part of As Equals, CNN’s ongoing series on gender inequality. For information about how the series is funded and more, … END_OF_DOCUMENT_TOKEN_TO_BE_REPLACED

IdentityForce, a service from the credit bureau TransUnion, monitors your personally identifiable information (PII) so you don’t have to do it … END_OF_DOCUMENT_TOKEN_TO_BE_REPLACED