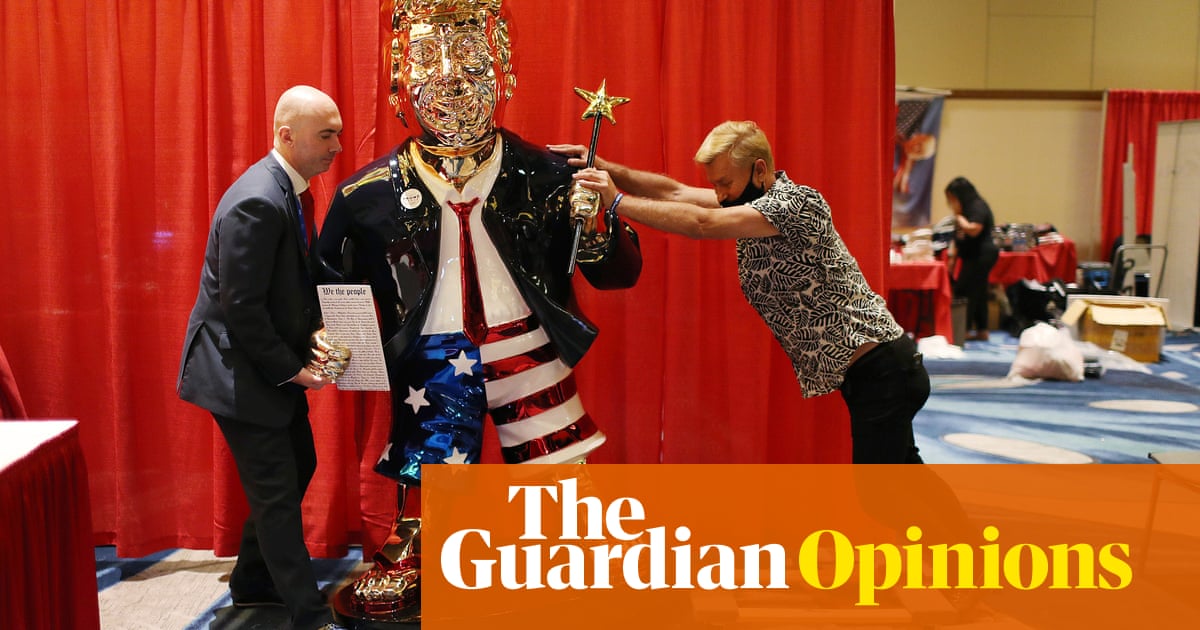 A few days after the insurrection at the Capitol, my father Jack started sending emails from his Lincoln, Kansas, home to his representative and senators in Congress. For some reason, he was also cc-ing me on these exchanges.

There was a new email almost every day, and the tone swung between pleading, angry, bewildered and frustrated. There were emails asking his senators to vote to impeach Trump, emails demanding proof supporting the allegations that the election had been stolen, emails trying to untangle their twisted logic.

One such email read, in part: “Your actions, and the actions of other Republicans like you, are destroying the Republican party. As I have been a lifelong Republican, I hate what has happened to the party of Lincoln and Reagan and the ideals of the past, to see it reduced to a personality cult.”

The politicians’ responses made it absolutely clear no one was taking my father’s criticisms seriously. Kansas representative Tracey Mann sent a form letter response, saying “we must unify as a nation”, which presumably meant moving on, forgetting the extravagant misdeeds of the Trump administration and voting against impeachment. When I asked my father if he had any expectation that his representatives would take responsibility for their involvement in the insurrection (Kansas junior senator Roger Marshall joined with those who claimed there was fraud during the election), he said, “No. Well … no.”

My father’s frustration with the Republican party had been building for years, but something seemed to break with him after the insurrection. The riot at the Capitol was, he believed, stoked by unscrupulous politicians who for four years cared more about power than rule of law and who, when that power slipped, would rather let the country continue to fall apart than work to rebuild.

The Republican party is in the midst of an identity crisis, brought on by a big shift in voting demographics and a new generation of more radical and paranoid politicians. As Democrats move away from their historically working-class constituency to become instead the party of the urban, college-educated liberal, Republicans find themselves attracting the loyalty of the religious, those not formally educated and the rural. The institutions which previously cultivated Republican voters – the university system and white-collar employment – now lead Americans to the political left, leaving conservative leaders and thinktanks scrambling to figure out how to accommodate their new, more blue-collar base. Many Republican politicians clearly find it easier to appeal to their base’s fears and resentments than to provide working-class Americans with stability and resources. This has led to some strange pageantry, like the Yale Law graduate and Missouri Republican senator Josh Hawley cosplaying as a man-of-the-people populist.

The Bulwark podcast, which is one of the few conservative media outlets my father still listens to, and which prides itself on its “civil” discourse, has been monitoring this identity crisis daily. In its episode “Post-Impeachment GOP”, host Charlie Sykes described the slow decline that seemed to accelerate once Republican voters believed the lie that the Trump’s re-election had been stolen and their politicians refused to deny or disavow it. “The Republican party has been willing to look the other way over lies, racism, all the corruption and xenophobia, but now it’s willing to look the other way [on] violence, extremism and anti-democratic authoritarianism.”

My father Jack likens his estrangement from the Republican party to the rise of the recently deceased Rush Limbaugh. He had listened to him in the 80s for about a year, at first finding funny his jokes about the hypocrisy of Democrats. But soon Rush’s tone changed. “He had been saying outrageous things about people and then laughing – but then he started to sound like he was really believing it. He wasn’t entertaining any more; he was vicious.” He was further turned off from Limbaugh, who exploded in popularity during the Clinton administration, by his reliance on cheap misogynist and homophobic jokes.

The Republican party as a whole was going down a similar path – choosing culture war battles over ideological integrity, and warmongering over supporting the institutions of family, religious freedom, strong communities, and small business the party professed to value. This was particularly visible in the politics of our home state of Kansas, which is often portrayed as hardline conservative, but whose local politics are far more nuanced than outsiders perceive. It’s worth remembering that the state has a strong local Democratic party, a history of far-left progressive politics, and that the current governor is Democrat Laura Kelly.

But back in 2011, Sam Brownback was elected governor and decided to make the most radical tax slashes the state had ever seen. This decimated the budgets of hospitals, schools, and other agencies, and they began to fall apart. Politicians ran against Brownback promising to raise taxes, something almost unheard of. The “Kansas experiment”, as it was called, revealed the emptiness of Republican rhetoric and their lack of new ideas beyond “cut taxes”.

Clearly my father is not the only conservative feeling estranged from the Republican party. Gerald Russello, editor of the conservative cultural journal the University Bookman, echoed the feeling. “The political conservatives you see on TV or in Congress are either Trump clowns or Reagan-era old guys who believe the free market solves everything,” he told me recently. “Who speaks for me? I can’t associate myself with clownish racists.”

It’s not yet clear how extensive the fallout from Trumpism will be, but a larger number of Republicans are changing their official political affiliation than Democrats, and there is talk of the possibility of forming a splinter political party, called the Integrity party. (The Lincoln Project founders were involved in this idea before the organization was racked by sexual harassment accusations and larger questions about its financial and political purpose.) Building a new political party into something that can attain power and influence is a long-term goal, but it would strive to give a voice to fiscal conservatives and social moderates, occupying a center-right position, left of where the Republicans currently sit.

When I asked my father if he could ever be persuaded to vote Democratic, he thought for a while. “I doubt it. I get this feeling from the Democrats of ‘We’re from the government and we’re here to help you’ that I don’t like. I want to know how can we best solve [a] problem instead of just throwing money at it.” What he considers problems – things like the national debt and overspending on military – the Democrats don’t seem to acknowledge, nor do the Republicans acknowledge what my father believes are looming disasters, like climate change and the broken healthcare system. But my father has no faith in the ideas Democrats have put forth to solve these issues.

Both my father and Russello expressed frustration with Republicans claiming to be a pro-family party while allowing families to suffer on their own through a pandemic.

“Give the people money!” Russello said. “It’s not socialism – that’s an argument from the 80s.” And he’s worried about the future if the party continues to abandon what should be its primary concern. “There’s a strain of conservatism with men and women in their 20s and 30s who have given up on politics. They say, you don’t know how bad things are for us.” The Republicans have little to offer them, as small towns and the middle of the country are allowed to decay into unemployment, de-industrialization and addiction, but these places are also Republicans’ strongholds.

For now, change looks unlikely to come from the top. Conservatives are still intellectually reliant on thinktanks in Washington, which have been spitting out the same ideas about the free market for decades. There are writers and intellectuals on the right who are trying to plot a course forward, but they are frequently drowned out by media personalities on Fox News and alt-right podcasts. Russello pointed out that after the media was so surprised by the election of Donald Trump in 2016, many publications pledged to go into these neglected regions and give coverage to their concerns. Very little of that coverage materialized; there have been few big splashy books on so-called “Trump country” apart from, say, Strangers in Their Own Land or Hillbilly Elegy. The focus has mostly remained on the more sensational side of Trumpism, like the QAnon conspiracy and insurrectionists, and less the outlook of the average conservative voter.

As for my father’s plans, he is still involved in local government, where he has served for decades now. He recently fought off an attempt by a committee to invite a Robert E Lee impersonator to the Lincoln Days festivities in honor of the town’s namesake, pointing out the general was a traitor who was lucky he wasn’t hanged. And despite the lack of results, he’s still sending those emails. Another one went out this morning.

The poshest place in California's Coachella Valley is The Madison Club. This exclusive gated community in La Quinta is where A-listers and tycoons … END_OF_DOCUMENT_TOKEN_TO_BE_REPLACED

KOROPY, Ukraine — Four men tugged at long strips of fabric to lift a coffin out of the gaping hole in the backyard of a small house. They flung the … END_OF_DOCUMENT_TOKEN_TO_BE_REPLACED