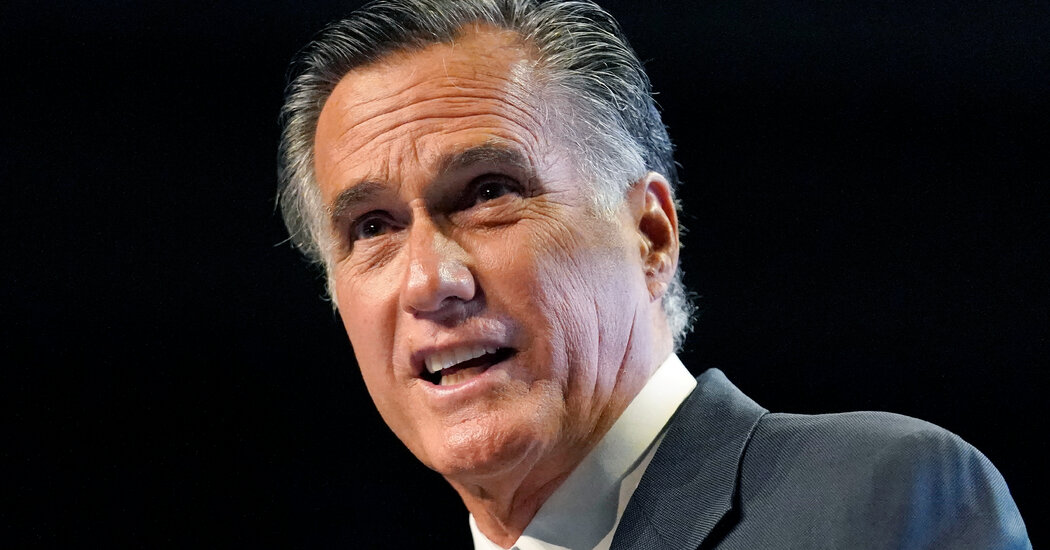 Despite the negative reception, which was reported by The Salt Lake Tribune, a vote to censure Mr. Romney narrowly failed later on Saturday.

Mr. Romney, one of several lawmakers to address the convention, took the stage to an overwhelming chorus of boos, though some of the roughly 2,100 delegates in attendance cheered and applauded him.

“Now you know me as a person who says what he thinks, and I don’t hide the fact that I wasn’t a fan of our last president’s character issues,” he said, according to video footage from the convention.

vote to remove a president from his own party from office during Mr. Trump’s first impeachment trial in 2020. Mr. Trump, he said at the time, was “guilty of an appalling abuse of public trust” for his pressure campaign on Ukraine to investigate his political rivals, including Joseph R. Biden Jr.

A year later, Mr. Romney was one of seven Republicans who voted to convict Mr. Trump in his second impeachment trial.

He hasn’t shied away from criticizing the former president. When Mr. Trump tried to overturn the results of the 2020 election, Mr. Romney accused him of trying to “subvert the will of the people.”

“It is difficult to imagine a worse, more undemocratic action by a sitting American president,” Mr. Romney wrote on Twitter.

He was one of several prominent Republicans who said they did not vote for Mr. Trump in the November election.

In January, Mr. Romney was heckled at the Salt Lake City airport and on a plane as he was traveling to Washington for a joint session of Congress to certify the election victory of President Biden. In one video, passengers on the plane can be heard chanting “traitor, traitor, traitor,” and at least one person in the video called for him to resign.

On the night of Jan. 6, hours after a group of Mr. Trump’s supporters stormed the Capitol to disrupt the vote certification, Mr. Romney addressed the Senate: “We gather due to a selfish man’s injured pride and the outrage of supporters who he had deliberately misinformed for the past two months and stirred to action this very morning. What happened here today was an insurrection incited by the president of the United States.”

The Salt Lake Tribune described as a “vigorous debate,” delegates at the state party convention on Saturday voted narrowly against censuring him, 798 to 711.

Don Guymon, a delegate from Davis County, sponsored the resolution. He told The Associated Press that Mr. Romney’s votes in favor of impeachment “caused harm to our party, our country and, ultimately, the U.S. Constitution.”

But Mr. Romney found support elsewhere within the Republican Party. Senator Susan Collins, Republican of Maine, said in an interview with CNN on Sunday that she was “appalled” by the censure attempt and the boos.

“We are not a party that is led by just one person,” she said on “State of the Union.”

If you’ve ever dreamed of a quiet life on a boat in Alaska, this new waterfront listing can help you realize that vision.Of course, there's always … END_OF_DOCUMENT_TOKEN_TO_BE_REPLACED