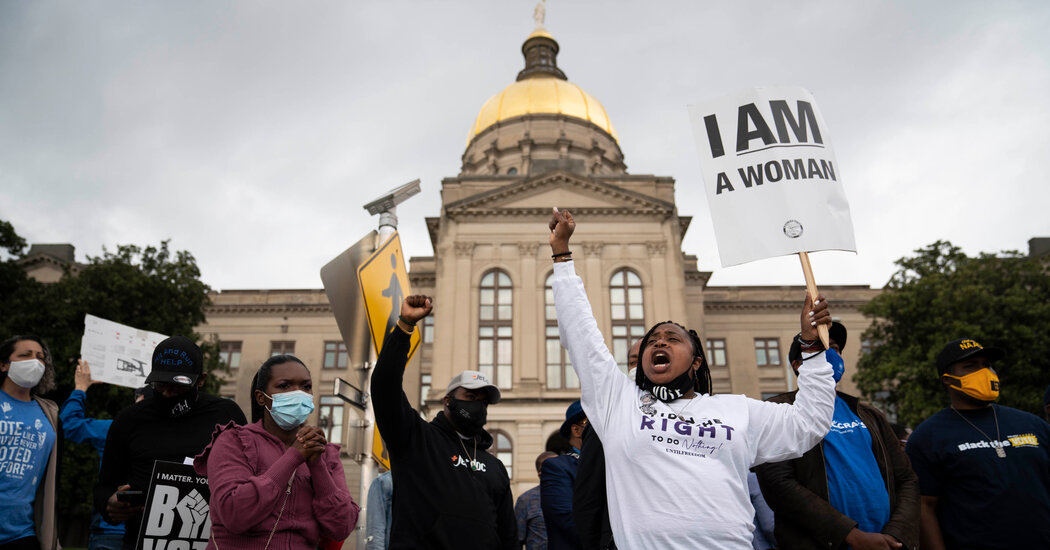 A coalition of civil rights groups led by the N.A.A.C.P. have filed a federal lawsuit against Georgia officials charging that a new law severely curtailing voting access represents “intentional discrimination” against the state’s Black voters.

The suit, dated March 28 and filed in the Northern District Court of Georgia, is the third case brought since Georgia’s Republican governor, Brian Kemp, signed a G.O.P.-backed bill that prohibits the use of drop boxes, requires proof of identity for absentee voting, and makes it a crime to provide food or water to voters forced to line up outside of polling locations.

Opponents of the bill are mounting an all-fronts battle to roll back the law and others like it, state by state — as Senate Democrats debate scrapping or suspending the filibuster rule to pass two sweeping electoral reform bills that would void state-level restrictions.

Civil rights groups and progressive activists are looking increasingly to the courts as the best chance to stop the voting restrictions that Republican-controlled legislatures in many states are considering or passing.

a growing force in the state’s urban and suburban areas.

“Unable to stem the tide of these demographic changes or change the voting patterns of voters of color, these officials have resorted to attempting to suppress the vote of Black voters and other voters of color in order to maintain the tenuous hold that the Republican Party has in Georgia,” they added. “In other words, these officials are using racial discrimination as a means of achieving a partisan end.”

One of the defendants named in the suit is Georgia’s secretary of state, Brad Raffensperger, a Republican who had rebuffed former President Donald J. Trump’s efforts to overturn President Biden’s narrow win in the state.

The plaintiffs claim that “detailed records” on “the racial demographics of voting” maintained by his office were used to draft the legislation.

Republicans in Georgia and several other states considering similar laws have argued that restrictions are needed to address claims of widespread voter fraud during the 2020 elections, even though election officials in the state have repeatedly reported that there were few, if any, instances of fraud in last year’s balloting.

An affordable center-chimney Colonial in Glastonbury, CT, is the oldest property to hit the market this week on Realtor.com®.Offered at a steep … END_OF_DOCUMENT_TOKEN_TO_BE_REPLACED

Nissan was one of the early pioneers of the electric car. The Leaf has now sold over 600,000 units worldwide since its launch in 2011 and is still … END_OF_DOCUMENT_TOKEN_TO_BE_REPLACED

RUDNE, Ukraine — Yurii Brukhal, an electrician by trade, didn’t have a very dangerous role when he volunteered for Ukraine’s territorial defense … END_OF_DOCUMENT_TOKEN_TO_BE_REPLACED